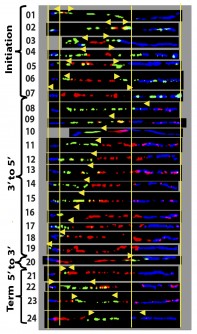 Researchers used genetic mapping to determine that stem cells derived from mothers carrying a fragile X premutation (above) show a normal pattern of DNA replication when a nearby DNA sequence is similar to normal stem cells.

Newswise — Researchers reveal how the alteration of a single nucleotide—the basic building block of DNA—could initiate fragile X syndrome, the most common inherited form of intellectual disability. The study appears in The Journal of Cell Biology.

Fragile X syndrome is caused by a defect in a gene on the X chromosome called fragile X mental retardation 1 (FMR1). Around 1 in 230 women and 1 in 360 men carry a so-called premutation, in which a series of DNA repeats at one end of the FMR1 gene is slightly longer than normal. These repeats are prone to even further expansion when FMR1 is passed from mother to child, causing the gene to switch off and stop producing a protein that is important for some cognitive functions.

A group of researchers from Albert Einstein College of Medicine of Yeshiva University in New York previously found that a certain site that initiates DNA replication, located near to the FMR1 gene, is inactivated in fragile X embryonic stem cells. This inactivation changes the way that the FMR1 gene is copied during cell division, which could pose problems that lead to expansion of the DNA repeats within the gene.

Intriguingly, a specific alteration in the DNA sequence near the FMR1 gene—a “single-nucleotide polymorphism” or SNP—has been linked to an increased risk of repeat expansion in some premutation carriers. These researchers discovered that this SNP overlaps with the inactive replication origin in fragile X embryonic stem cells.

Nucleotides in DNA include one of four bases (cytosine, thymine, adenine, or guanine). The researchers found that normal embryonic stem cells had a thymine base at the SNP site and an active replication origin. Fragile X cells, in contrast, had a cytosine base and an inactive origin. The researchers also derived embryonic stem cells from mothers carrying the fragile X premutation. These cells had a thymine base and a normal replication pattern and, accordingly, showed no tendency to expand their repeat numbers over time.

The findings show that the substitution of cytosine for thymine might inactivate the DNA replication origin when the FMR1 gene is passed from mother to child, increasing the risk of DNA repeat expansions that can lead to fragile X syndrome.