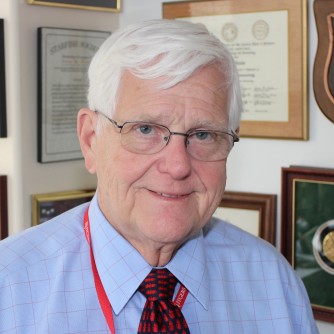 James Oleske, long admired for his work with young HIV/AIDS patients in the 1980s, is now a champion of palliative care for children with severe illnesses. 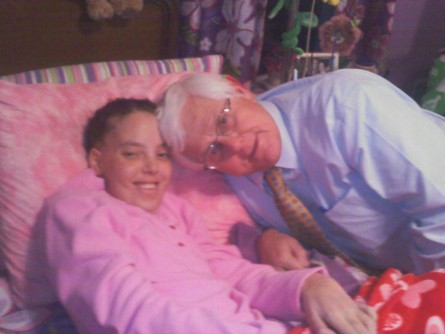 Leanne Schoberl treasured seeing this picture when she used her cell phone.

Newswise — Leanne Schoberl could have put anyone’s picture on the home screen of her cell phone.

Yet Leanne, who died last January at 27, chose a photograph of herself with James Oleske, the doctor who cared for her throughout her life. From infancy, when her lungs collapsed and her family feared she might not reach her first birthday, through an attack of meningitis at 6 that produced severe seizures, to a lifelong immune deficiency with complications that included a rare pneumonia, Oleske helped pull Leanne through and – even more important to the Schoberls – made it his mission to preserve her comfort and quality of life.

Throughout a four-decade career as a pediatrician at what is now Rutgers New Jersey Medical School, Oleske has set himself apart by being drawn to young patients whose cases appear to be the most dire. In the 1980s, he was one of the first physicians who recognized that mothers could transmit HIV to their newborns – and then earned renown for treating children both in Newark and around the world who faced inevitable death from AIDS.

Fortunately, HIV/AIDS no longer takes many young lives, but children born with severe forms of muscular dystrophy and other disorders – or badly wounded in shootings or accidents – continue to endure unspeakable pain, and Oleske is their champion. Oleske’s focus has become palliative care – relieving as much pain as possible for patients in terrible situations.

“Pain is a bad thing,” Oleske says, “and in the past as doctors we didn’t recognize it. I am sorry I didn’t realize it more myself when I was treating children dying of AIDS – that it wasn’t just good enough to be a smart infectious disease immunologist who enrolled them in clinical trials and tried my best. You can’t have much quality of life if you’re in severe pain. So now I emphasize pain management.”

In 2002, Oleske co-founded the Circle of Life Children’s Center in Elizabeth, N.J., which has become a regional resource center for palliative and end-of-life care for children and their families. Its aim is to give support so that a family can treat a child in the best environment possible.

“Part of palliative care is also letting go,” Oleske adds. “You may love a child and want them to live, but you know that at a certain point, there’s no mas. And then you go into the mode of making giving up as painless as possible and support the family and others to live through that.”

Some aspects of palliative care are difficult; the physician and family often need to weigh whether a medical procedure or surgery will be helpful enough to be worth enduring. Other actions are far more simple, such as making sure a child’s home has the right equipment to make life more comfortable. “He or she shouldn’t need to stay in a hospital to get the right kind of bed,” Oleske explains. “You’ve got to understand the child’s total needs.”

Throughout Leanne Schoberl’s life, Oleske went to extraordinary lengths to make her illnesses and treatments as easy to tolerate as possible. If Oleske needed a blood sample, John Schoberl says he worked extra hard to find the least painful spot, instead of poking her a dozen or more times in arms that had become pincushions. If Leanne needed complicated transfusions, he made sure she could get them at home where she would be most comfortable.

“What drives him is making sure that he’s doing something for somebody else,” says Schoberl, whose family lives in Alexandria Township, N.J. “So many times when Leanne was in the hospital because of immune deficiencies he would come up to visit her, even if he wasn’t her primary caregiver – especially the last four or five years. She had an amazing affection for the way he treated and dealt with her. She loved him.”

Lisa Schoberl, Leanne’s mother, recalls how Oleske was the one doctor Leanne always looked forward to seeing. “We trusted and admired him and felt secure when he told us, ‘Lisa and John, you’re making the right choice,’” she says. “I don’t think that I could have gotten through any of this without having Jim in our lives. He genuinely loved our Leanne.”

For his work and love of children, Oleske has earned honors that include a lifetime achievement award from a national branch of the American Academy of Pediatrics, and most recently “Pediatrician of the Year” in April of this year from the academy’s New Jersey chapter. At age 69, he is determined to train others to follow in his footsteps. He does his best at the medical school “to sensitize students and residents to the value of palliative care,” and says his fondest hope now would be to create a formalized program to certify future end-of-life palliative care specialists.

Kendell Sprott, senior associate dean for clinical affairs at Rutgers New Jersey Medical School, has known Oleske practically from the start. “He wears his concern for kids on his sleeve,” says Sprott. “He’s very passionate about what he does. I think he is in many ways the goodwill ambassador toward the development of palliative care, both in pediatrics and beyond.” 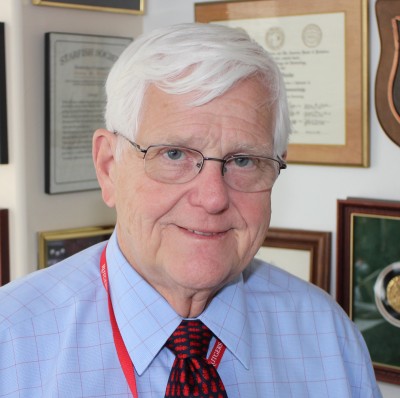 Caption: James Oleske, long admired for his work with young HIV/AIDS patients in the 1980s, is now a champion of palliative care for children with severe illnesses. 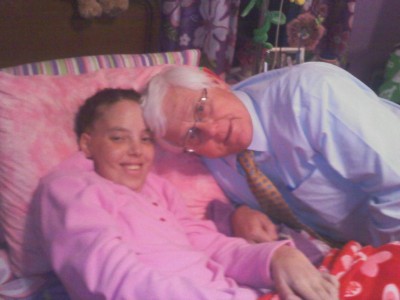 Caption: Leanne Schoberl treasured seeing this picture when she used her cell phone.