A planet that should not exist 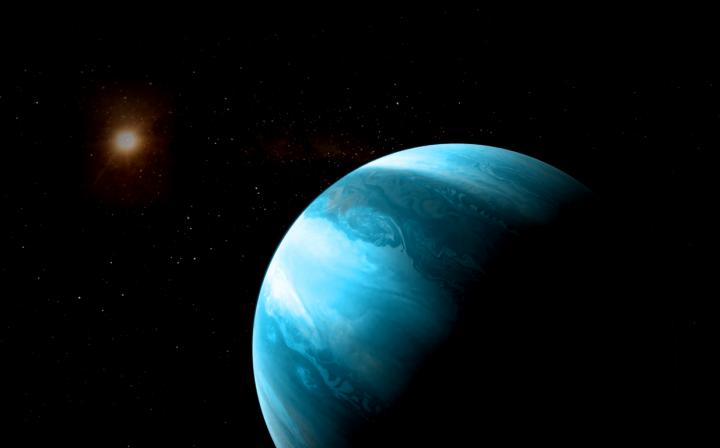 Newswise — The red dwarf GJ 3512 is located 30 light-years from us. Although the star is only about a tenth of the mass of the Sun, it possesses a giant planet - an unexpected observation. "Around such stars there should only be planets the size of the Earth or somewhat more massive Super-Earths," says Christoph Mordasini, professor at the University of Bern and member of the National Centre of Competence in Research (NCCR) PlanetS: "GJ 3512b, however, is a giant planet with a mass about half as big as the one of Jupiter, and thus at least one order of magnitude more massive than the planets predicted by theoretical models for such small stars."

The mysterious planet was detected by a Spanish-German research consortium called CARMENES, which has set itself the goal of discovering planets around the smallest stars. For this purpose, the consortium built a new instrument, which was installed at the Calar Alto Observatory at 2100 m altitude in southern Spain. Observations with this infrared spectrograph showed that the small star regularly moved towards and away from us - a phenomenon triggered by a companion who had to be particularly massive in this case. Because this discovery was so unexpected, the consortium contacted, among others, the Bern research group of Mordasini, one of the world's leading experts in the theory of planet formation, to discuss plausible formation scenarios for the giant exoplanet. The paper with all contributions has now been published in the journal Science.

"Our model of the formation and evolution of planets predicts that around small stars a large number of small planets will be formed," Mordasini summarizes, referring to another well-known planetary system as an example: Trappist-1. This star comparable to GJ 3512 has seven planets with masses roughly equal to or even less than the mass of the Earth. In this case, the calculations of the Bern model agree well with the observation. Not so with GJ 3512. "Our model predicts that there should be no giant planets around such stars," says Mordasini. One possible explanation for the failure of current theory could be the mechanism underlying the model, known as core accretion. Planets are formed by the gradual growth of small bodies into ever larger masses. The experts call this a "bottom-up process".

Maybe the giant planet GJ 3512b was formed by a fundamentally different mechanism, a so-called gravitational collapse. "A part of the gas disk in which the planets are formed collapses directly under its own gravitational force," explains Mordasini: "A top-down process." But even this explanation poses problems. "Why hasn't the planet continued to grow and migrate closer to the star in this case? You would expect both if the gas disk had enough mass to become unstable under its gravity," says the expert and adds: "The planet GJ 3512b is therefore an important discovery that should improve our understanding of how planets form around such stars."