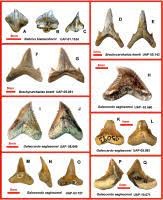 Newswise — Eocene-aged sediments of Madagascar contain a previously unknown fauna of sharks and rays, according to a study released February 27, 2019 in the open-access journal PLOS ONE by Karen Samonds of Northern Illinois University and colleagues. This newly-described fauna is the first report of sharks and rays of this age in Madagascar.

The Mahajanga basin of northwestern Madagascar yields abundant fossil remains of terrestrial and marine ecosystems, but little is known about fossil sharks and rays during the Eocene Epoch, 55-34 million years ago, in this region. This is in contrast to the numerous shark and ray faunas known from other Eocene sites around the globe, and to shark and ray ecosystems known from older and younger sediments in the Mahajanga basin.

In this study, Samonds and colleagues collected isolated teeth, dental plates, and stingray spines from ancient coastal sediments of the Ampazony and Katsepy regions of the basin, dated to the middle to late Eocene. They identified at least 10 species of sharks and rays, including one new species, Carcharhinus underwoodi. This is the oldest named species of Carcharhinus, a genus that has been globally distributed for the past 35 million years but is known only rarely from the Eocene.

Aside from the new species, the fauna of Eocene Madagascar shares many species with Eocene ecosystems across North Africa, suggesting these animals were widespread in southern seas at that time. On the other hand, the Madagascar fauna is uniquely lacking in sandsharks and dominated by eagle rays, indicating a somewhat unusual ecosystem, unsurprising given Madagascar’s long history of isolation. The authors caution that this study provides an incomplete picture given that they collected only fossils larger than 2 millimeters. They recommend that future studies target smaller material for a more complete view of the ancient ecosystem.

In your coverage please use this URL to provide access to the freely available article in PLOS ONE:  http://journals.plos.org/plosone/article?id=10.1371/journal.pone.0211789

Funding: Funded by National Geographic Research and Exploration Grant (Karen Samonds) Standard Grants (#9662-15, #8667-09, #8125-06, #7687-04); https://www.nationalgeographic.org/topics/exploration/. The funders had no role in study design, data collection and analysis, decision to publish, or preparation of the manuscript.