A runaway star ejected from the galactic heart of darkness

Newswise — Astronomers have spotted an ultrafast star, traveling at a blistering 6 million km/h, that was ejected by the supermassive black hole at the heart at the Milky Way five million years ago.

The discovery of the star, known as S5-HVS1, was made by Carnegie Mellon University Assistant Professor of Physics Sergey Koposov as part of the Southern Stellar Stream Spectroscopic Survey (S5). Located in the constellation of Grus - the Crane - S5-HVS1 was found to be moving ten times faster than most stars in the Milky Way.

"The velocity of the discovered star is so high that it will inevitably leave the galaxy and never return," said Douglas Boubert from the University of Oxford, a co-author on the study.

Astronomers have wondered about high velocity stars since their discovery only two decades ago. S5-HVS1 is unprecedented due to its high speed and close passage to the Earth, "only" 29 thousand light years away. With this information, astronomers could track its journey back into the center of the Milky Way, where a four million solar mass black hole, known as Sagittarius A*, lurks.

"This is super exciting, as we have long suspected that black holes can eject stars with very high velocities. However, we never had an unambiguous association of such a fast star with the galactic center," said Koposov, the lead author of this work and member of Carnegie Mellon's McWilliams Center for Cosmology. "We think the black hole ejected the star with a speed of thousands of kilometers per second about five million years ago. This ejection happened at the time when humanity's ancestors were just learning to walk on two feet."

Superfast stars can be ejected by black holes via the Hills Mechanism, proposed by astronomer Jack Hills thirty years ago. Originally, S5-HSV1 lived with a companion in a binary system, but they strayed too close to Sagittarius A*. In the gravitational tussle, the companion star was captured by the black hole, while S5-HVS1 was thrown out at extremely high speed.

"This is the first clear demonstration of the Hills Mechanism in action," said Ting Li from Carnegie Observatories and Princeton University, and leader of the S5 Collaboration. "Seeing this star is really amazing as we know it must have formed in the galactic center, a place very different to our local environment. It is a visitor from a strange land."

The discovery of S5-HVS1 was made with the 3.9-meter Anglo-Australian Telescope (AAT) near Coonabarabran, NSW, Australia, coupled with superb observations from the European Space Agency's Gaia satellite, that allowed the astronomers to reveal the full speed of the star and its journey from the center of the Milky Way.

"The observations would not be possible without the unique capabilities of the 2dF instrument on the AAT," said Daniel Zucker, an astronomer at Macquarie University in Sydney, Australia, and a member of the S5 executive committee. "It's been conducting cutting-edge research for over two decades and still is the best facility in the world for our project."

These results were published on November 4 online in the Monthly Notices of the Royal Astronomical Society, and the S5 collaboration unites astronomers from the United States, United Kingdom, Australia and Chile.

"I am so excited this fast-moving star was discovered by S5," says Kyler Kuehn, at Lowell Observatory and a member of the S5 executive committee. "While the main science goal of S5 is to probe the stellar streams -- disrupting dwarf galaxies and globular clusters -- we dedicated spare resources of the instrument to searching for interesting targets in the Milky Way, and voila, we found something amazing for 'free.' With our future observations, hopefully we will find even more!"

Caption: The location of S5-HVS1 on the sky and the direction of its motion. The star is flying away from the galactic center, from which it was ejected 5 million years ago. 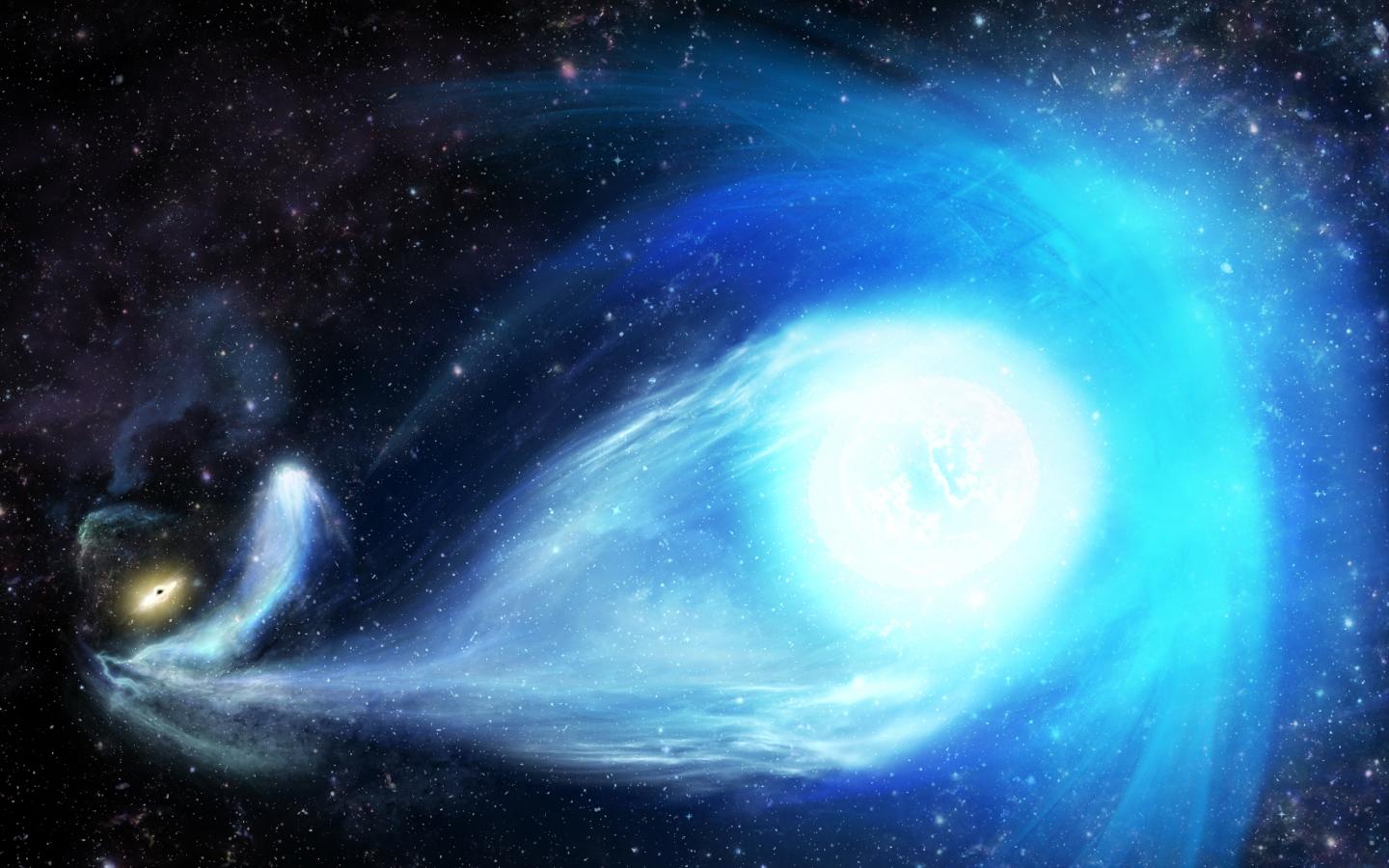 Caption: An artist's impression of S5-HVS1's ejection by Sagittarius A*, the black hole at the center of the galaxy. The black hole and the captured binary partner to S5-HVS1 are seen far away in the left corner of the picture, while S5-HVS1 is in the foreground, speeding away from them.