A Softer Approach to Colon Cancer Screening: A Q&A with Samir Gupta 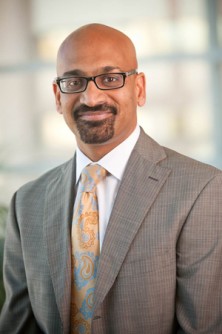 Samir Gupta, MD, is a gastroenterologist at UC San Diego Health with expertise in colorectal cancer screening and prevention.

Newswise — Perhaps you’ve seen the commercial: an animated box sitting on a toilet that tells you to “just go” — that is, collect your stool — and ship the sample to a lab to be screened for cancer and pre-cancer. This DNA-based, non-invasive test is just one option now available to screen for colon cancer.

In the past, colonoscopies were the go-to form of screening. While some people sign up for regular checkups, not everyone is so willing to be probed when they may not feel symptoms of disease. However, cancer can grow without noticeable signs and when disease becomes obvious, it may already be advanced.

Samir Gupta, MD, is a board-certified gastroenterologist at UC San Diego Health and Veterans Affairs San Diego Healthcare System with expertise in colorectal cancer screening and prevention. March is Colorectal Cancer Awareness Month, so we asked him about the importance of early detection and less intrusive testing, including fecal and blood tests, that might increase participation in screening for disease.

Answer: Colorectal cancer is the second leading cause of cancer death in the United States. According to the National Cancer Institute, an estimated 134,000 new cases were diagnosed in 2016 and nearly 50,000 people died. But when discovered early through screening, colorectal cancer is highly treatable. Screening can even prevent cancers from developing through detection and removal of precancerous polyps. Also, screening can detect polyps and cancer before you even have symptoms.

Q: Which screening tests should be used?

A: The best test is the one that is most acceptable to you. The one that you are willing to have done now. Your physician might recommend a specific test based on your medical and family history, but ultimately it’s up to you. Tests include http://jamanetwork.com/learning/video-player/13030589 a traditional colonoscopy, a CT colonography, a stool test to check for blood or abnormal DNA or a sigmoidoscopy.

According to the United States Preventive Services Task Force (USPSTF), an independent group of national experts in prevention that makes evidence-based recommendations about clinical preventive services, including screenings, there is no information demonstrating that any one is better than another so pick one and get screened based on your personal preferences. For example, if you want to place the greatest emphasis on sensitivity for colon cancer and polyps, ability to detect and remove polyps if present and a long interval between normal exams, colonoscopy may be the best test for you. If you prefer the convenience of a non-invasive, at-home test and don't mind repeating a test frequently, consider a stool test that checks for blood or blood and abnormal DNA. Your doctor can also help you decide the best test for you.

Q: Who should be screened for colorectal cancer and when?

A: Men and women of all racial and ethnic groups should be screened for colorectal cancer. The USPSTF recommends that men and women start screening for colorectal cancer at age 50 and continue until age 75. After that, it’s best to have a conversation with your physician to make individualized decisions on whether it is necessary. For people 85 and older, screening is no longer recommended. Although it is most often found in people 50 years or older, incidence in people younger than 50 is on the rise. If you’re under 50 and you have family history or notice a change in bowel movements, blood in your stool and/or weakness or fatigue, talk to your physician. It may be nothing, but to use an old cliché, isn’t it better to be safe than sorry?

Q: What happens if the test shows abnormalities?

A: Should the results of a test come back indicating the presence of polyps or cancer, your physician may request further tests.