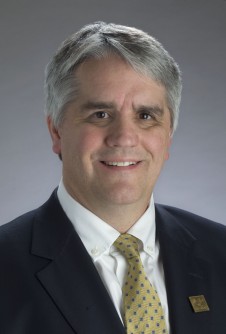 Newswise — The Association of American Cancer Institutes (AACI) announces the election of Roy Jensen, MD, as Vice President/President-elect. Dr. Jensen is director of The University of Kansas Cancer Center. His two-year term will start on October 23, during the AACI/CCAF annual meeting, in Chicago.
In 2004 Dr. Jensen was appointed the William R. Jewell, M.D. Distinguished Kansas Masonic Professor, the director of The University of Kansas Cancer Center, the director of the Kansas Masonic Cancer Research Institute, professor of Pathology and Laboratory Medicine, and professor of Anatomy and Cell Biology at the University of Kansas Medical Center. Under his leadership, Kansas earned designation as a National Cancer Institute cancer center in 2012.
Dr. Jensen has been a member of AACI’s board of directors since October 2013. He chaired the association’s 2013 Annual Meeting program committee and last year served on an educational briefing panel on Capitol Hill, co-sponsored by AACI and the American Association for Cancer Research, in cooperation with the House Cancer Caucus. The briefing focused on educating new legislators, their staff, and Hill veterans about the importance of the nation’s cancer centers.
“Roy has provided invaluable service to AACI as a member of its board of directors for the past three years and I look forward to his leadership of the association,” said AACI Executive Director Barbara Duffy Stewart. “As an executive and physician scientist, Roy is acutely aware of the needs of the talented professionals who collaborate closely to build a cancer center.”
As AACI Vice President/President-elect, Dr. Jensen will work with other AACI leadership to support the organization’s mission of enhancing the impact of academic cancer centers. AACI’s current president is George L. Weiner, MD, director of the Holden Comprehensive Cancer Center, University of Iowa. He will be succeeded in October by Stanton L. Gerson, MD, director of the Case Comprehensive Cancer Center, in Cleveland, OH.
###
The Association of American Cancer Institutes (AACI) comprises 95 premier academic and freestanding cancer research centers in the U.S. and Canada. AACI is dedicated to reducing the burden of cancer by enhancing the impact of the leading academic cancer centers.