AARDA Mourns the Loss of Dr. Noel R. Rose, "The Father of Autoimmunity" 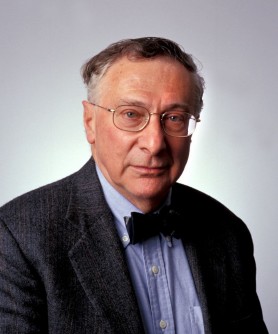 Newswise — Among his peers, Noel R. Rose, M.D. was a giant.  To the American Autoimmune Related Diseases Association (AARDA), he was a friend, mentor, advisor, leader and champion for nearly 30 years.

A prominent figure at board meetings, public forums and Congressional briefings, in webinars and national and international conferences, Dr. Rose shared his vast knowledge and expertise with millions, always with great charm, clarity and his signature bow tie.

Dr. Rose was a founding member and served as chair of AARDA’s Scientific Advisory Board.  He led the renowned Scientific Colloquia; headed the AARDA-supported Center for Autoimmune Disease Research at the Johns Hopkins University Bloomberg School of Public Health; and championed the AARDA mission.  For his incomparable and dedicated service, AARDA presented Dr. Rose with its first Champion Award in 2016, named him a #Autoimmune Hero in 2017, and last year renamed the series of scientific meetings he established and convened, the Noel R. Rose Scientific Colloquia.  Dr. Rose received dozens of other honors and awards from prestigious institutions throughout his career.  He was once nominated for a Nobel Prize, and was awarded the American Association for the Advancement of Science Golden Goose Award in 2019 for his pioneering work in autoimmunity.

“Words cannot express the magnitude of my feelings for this man who was both intellectually and in his personhood a giant,” says Virginia T. Ladd, AARDA founder, immediate past president, and current advisor to the president.  “Noel Rose leaves an incredible legacy and will be remembered always by AARDA and the autoimmune community.  His willingness to always take time to respond to patient calls and emails, which he continued to do until last week, is a tribute to his respect for patients and their need for information.”

Dr. Rose was recognized as the “father of autoimmunity” for his groundbreaking discovery of thyroid autoimmunity in 1956.  With this discovery, he would effectively establish the field of autoimmunology and usher in a new era of autoimmune disease research that today impacts one in every five Americans.

“Our patients with autoimmune diseases of the skin will remember [Dr. Rose] and will be forever grateful for his contributions in understanding their illnesses,” says Luis A. Diaz, M.D., UNC School of Medicine, and member, AARDA Scientific Advisory Board.

“He was one of those giants on whose shoulders we have all stood,” says Robert Eisenberg, M.D., professor emeritus, University of Pennsylvania, Division of Rheumatology.

“We have decided to name a session in the Congress of Autoimmunity after Noel R. Rose,” says Yehuda Shoenfeld, M.D., FRCP, MaACR, professor emeritus of the Zabludowicz Center for Autoimmune Diseases, Sheba Medical Center, Tel-Aviv University.  “We will all remember and memorialize him.”

Noel R. Rose, M.D., Ph.D., was editor or co-editor of 23 books, most notably, “The Autoimmune Diseases”, a classic textbook, and published more than 880 articles and chapters in the fields of immunology, immunopathology, autoimmunity and autoimmune diseases.  In addition, he authored several AARDA patient education brochures.  He was 92.

Dr. Rose’s family has asked that memorial donations be made to AARDA in support of the Noel R. Rose Scientific Colloquia.  Contributions can be made at www.aarda.org/donate or mailed to AARDA, 22100 Gratiot Avenue, Eastpointe, MI  48021.