Despite challenges posed by the pandemic, researchers collaborated to describe new-to-science species from five continents and three oceans 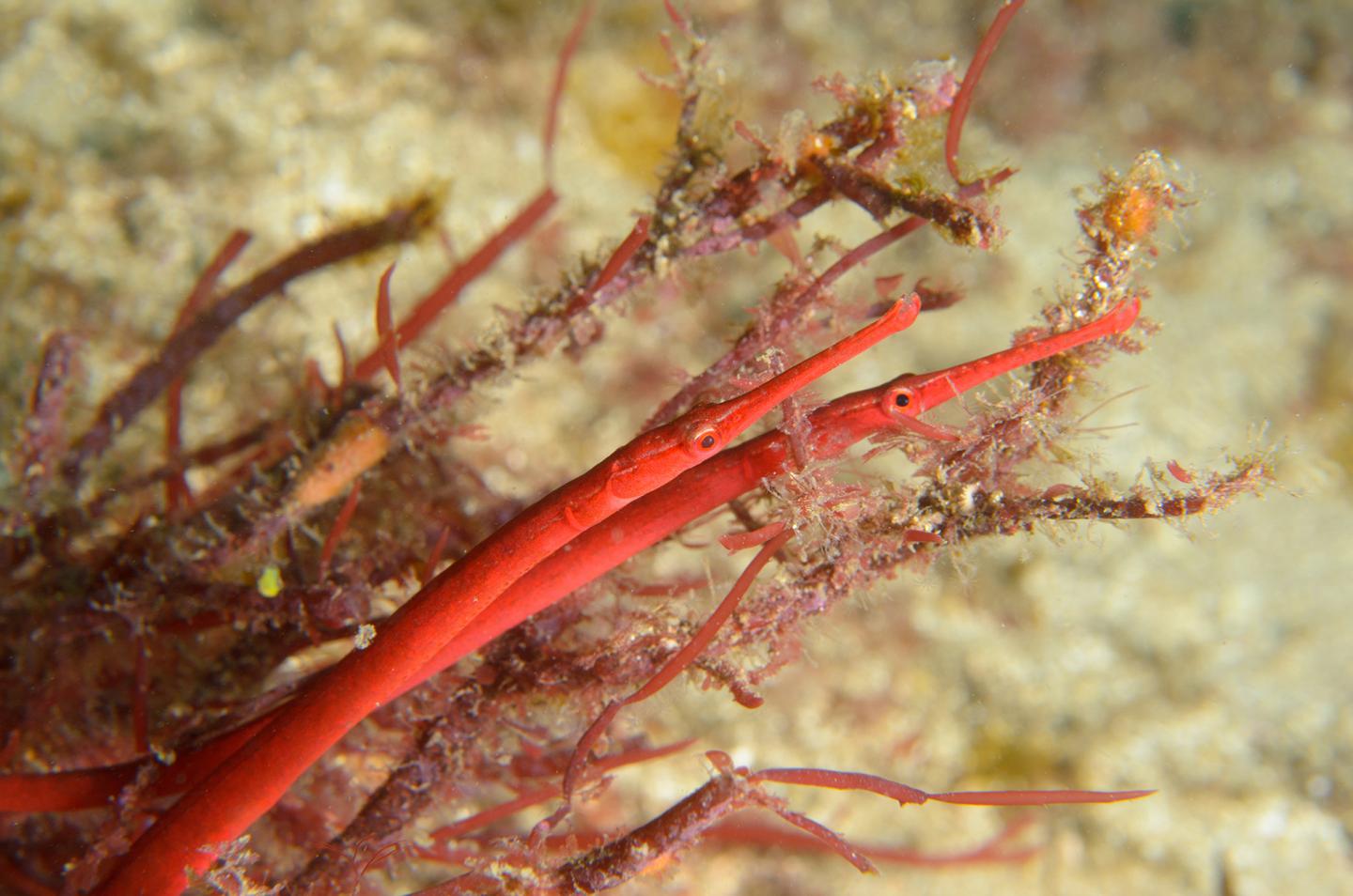 Despite living just off the coast of bustling Sydney, Australia, this pipefish, Stigmatophora harastii, was only just discovered. 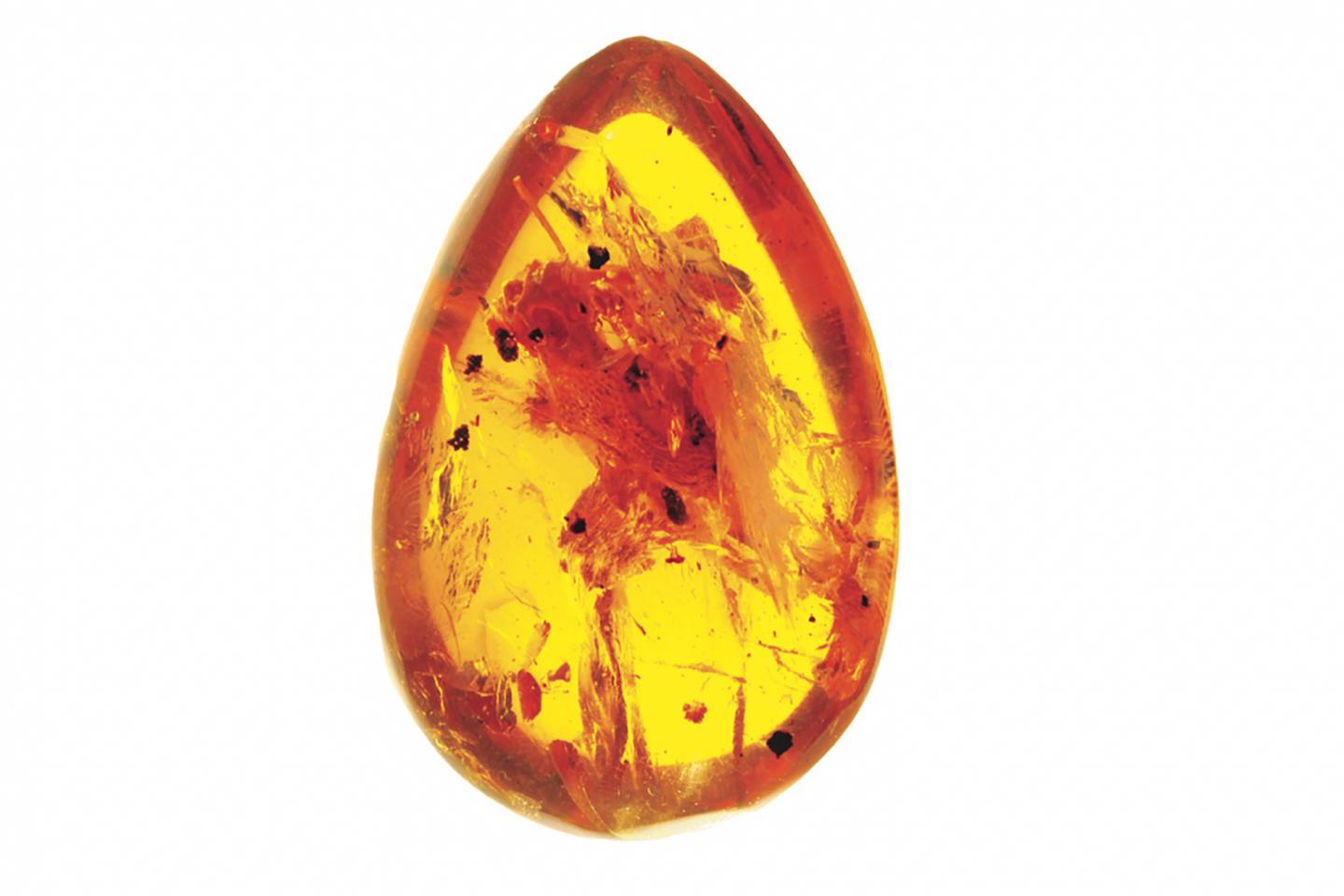 This fossilized amphibian, Yaksha peretti, extends the historical record of slingshot predation to 100 million years ago. 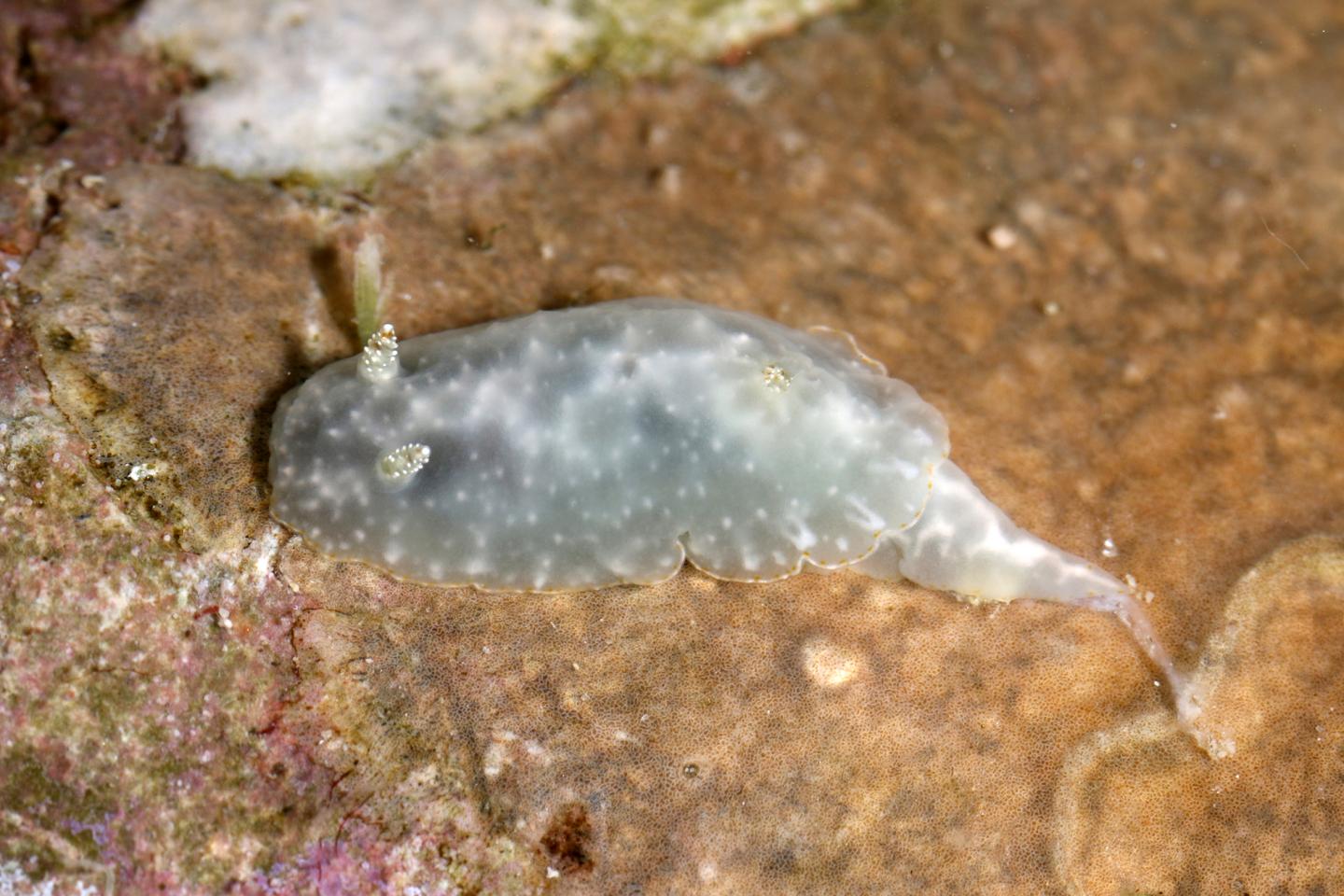 The new-to-science sea slug Chromodoris kalawakan. 'Kalawakan' means 'galaxy' in Filipino, a tribute to the nudibranch's native habitat and its stellar coloration.

Newswise — SAN FRANCISCO (December 9, 2020) -- This past year, researchers at the California Academy of Sciences added 213 plant and animal species to the tree of life, providing deeper insight into the rich biodiversity of our planet and helping to inform global conservation strategies. The new species include 101 ants, 22 crickets, 15 fishes, 11 geckos, 11 sea slugs, 11 flowering plants, eight beetles, eight fossil echinoderms, seven spiders, five snakes, two skinks, two aphids, two eels, one moss, one frog, one fossil amphibian, one seahorse, one fossil scallop, one sea biscuit, one fossil crinoid (or sea lily), and one coral. More than two dozen Academy scientists--along with many more collaborators throughout the world--described the new species.

While the coronavirus has presented unique challenges this year for Academy scientists--whose research typically involves expeditions or visits to scientific collections--it has also underscored the importance of their work. "Unfortunately, the pandemic is a symptom of our broken relationship with nature," says Academy virologist and Chief of Science Shannon Bennett, PhD. "These newly described species represent one aspect of a growing collective effort to mend that relationship. By improving our understanding of Earth's biodiversity and bringing us more in touch with the natural world, each new species serves as an important reminder--as does the pandemic--of our vital role in protecting our planet's ecosystems."

Below are thematic highlights from the 213 new species described by the Academy this past year. On January 7, 2021, there will be a virtual NightSchool event celebrating the new species, featuring several of the researchers who described them. For a full list of species and hi-res images, please contact [email protected].

For researchers interested in describing new species, there are few places more rich in taxonomic treasures than natural history collections like those found at the Academy. Colloquially known as a 'library of life,' the Academy's collections contain more than 46 million specimens representing many branches across the tree of life.

Since describing species takes time and expertise, a number of specimens in our collections represent species unknown to science. Indeed, that was the case for a number of this year's new species, including the striking bush pit viper, Atheris hetfieldi, which was described from a single Academy specimen collected in the early 1900s.

Importantly, the specimens found in natural history collections span both time and space, providing baseline data for the geographic distribution of species at various points in the past. For example, the collections used by Academy Curator of Botany Frank Almeda, PhD, and visiting researcher Ricardo Pacifico for this year's newly described flowering plants in the genus Microlicia provide researchers with potential locations in Brazil where they might find living specimens. Once found in the wild, the locations can be cross-referenced with information from the archived specimens to paint a picture of how the plant's range has changed over time--invaluable information when assessing the conservation status of the species.

To gain a deeper knowledge of these changes, however, requires specimens collected on geologic timescales--across millennia instead of centuries. Fortunately, fossils can provide these windows to the past.

"Fossils provide a unique opportunity to observe how past species, communities, and ecosystems have responded to environmental change," says Academy collections manager Christine Garcia, who described the fossil scallop Lyropecten terrysmithae, which lived in California around 11 million years ago. "Moreover, this evidence can offer insights into how modern species and ecosystems may respond to human-driven changes in the near future."

Amber fossils can be particularly insightful since they often preserve features that other fossils do not, such as muscle tissue or plant matter. Using this additional information, Academy Research Associate Aaron Bauer, PhD, and his colleagues determined that the amber-trapped amphibian Yaksha peretti likely used its tongue as a slingshot to catch prey, similar to modern-day chameleons, extending the evolutionary origins of this adaptation to 100 million years ago.

After running a genetic analysis on an unknown species of sea slug, Lynn Bonomo, an early-career researcher working with Academy Curator of Invertebrate Zoology Terry Gosliner, PhD, was skeptical of her results. "I thought I had messed up," she recalls. According to her analysis, the new nudibranch was a member of Chromodoris, a colorful genus of sea slugs that typically sport prominent black stripes along the length of their bodies. But Bonomo's species, which she aptly named Chromodoris kalawakan ('kalawakan' means 'galaxy' in Filipino), is cloudy gray with pinpricks of white.

After double-checking the analysis and studying the internal morphology of the specimen, however, Gosliner confirmed the finding: C. kalawakan was in an entirely different genus than expected and Bonomo had the basis for describing her first species.

While it is exciting for a new species to bounce between genera, it is not uncommon. Even experts can misidentify unfamiliar species if the organisms lack the typical morphology of one genus or present those of another. To untangle these twisted branches on the tree of life, researchers turn to gene sequencing technologies, like those used by Bonomo, which determine the relationships between species through mathematical analyses.

In addition to morphology and genetics, researchers also use behavior to distinguish species. For example, when describing this year's new species of crickets, Academy Research Assistant David Weissman, PhD, partially relied on analyses of the insects' chirps. Using recording equipment and audio software, entomologists like Weissman capture the sound waves of cricket calls to compare with those of known species.

For some species, technology not only plays a significant role in how they are described but also how they are discovered. At up to 500 feet (approximately 150 meters) below the ocean's surface, mesophotic coral reefs pose challenges for conducting scientific research. Using traditional scuba gear to study these reefs would be impossible due to the intense pressure at such depths and the long duration necessary to reach them.

To overcome these oceanic obstacles, scientists at the Academy use revolutionary diving technologies. Closed-circuit rebreathers scrub the carbon dioxide from exhaled breaths, then return oxygenated air mixed with helium to the diver so they can observe beautiful new species, such as this year's Cirrhilabrus briangreenei, for longer at mesophotic depths.

Together these innovative technologies--gene sequencing, sound analysis, deep-sea diving equipment, and more--allow researchers to explore the biodiversity of our world like never before, adding both species and clarity to the tree of life.

Despite decades of scouring the Earth, it is estimated that more than 90% of species remain unknown to science. More humbling still, a number of the newly described species each year--including an inconspicuous pipefish--are found hidden in plain sight.

Off the coast of Botany Bay, Australia, a popular scuba diving site near Sydney, pipefish have long been known to exist in the shallows among seagrass or brown algae, hiding from would-be predators. Until Research Associate Graham Short, PhD, discovered Stigmatopora harastii, however, none had been documented in red algae before--brown algae's deepwater relative that's lower in abundance. By subverting researchers' expectations of the genus, this unique evolutionary advantage allowed S. harastii to not only avoid competition with shallow-dwelling pipefish that prefer brown algae, but evade scientific scrutiny as well.

In addition to cryptic behavior driven by evolution, another explanation for finding undescribed species in familiar places is human encroachment on nature. As major cities like Guwahati, India--home to the newly described gecko Crytodactylus urbanus--expand, surrounding ecosystems shrink. As a result, some species lose their preferred habitat and are forced out, while others well-suited to urban landscapes thrive, including some that are new to science.

Though urban expansion can be ecologically disruptive, community outreach can inspire appreciation for the species that still call concrete jungles home. Indeed, part of Research Associate Aaron Bauer's motivation for naming the gecko C. urbanus was to raise awareness about the value of urban species. "Since this diversity occurs where people live, it provides an opportunity for them to connect with nature in their own backyard," Bauer says. Importantly, this increased appreciation of local biodiversity can drive conservation efforts to protect these fragile environments.

From urban spaces to unexpected places, understanding biodiversity--particularly where humans and nature coexist and therefore where nature is most vulnerable--is crucial for effectively stewarding the planet. By continuing to scour the known for the unknown, researchers can deepen that understanding and further foster an appreciation for the natural world.

About Research at the California Academy of Sciences

The Institute for Biodiversity Science and Sustainability at the California Academy of Sciences is at the forefront of efforts to understand two of the most important topics of our time: the nature and sustainability of life on Earth. Based in San Francisco, the Institute is home to more than 100 world-class scientists, state-of-the-art facilities, and nearly 46 million scientific specimens from around the world. The Institute also leverages the expertise and efforts of more than 100 international Associates and 450 distinguished Fellows. Through expeditions around the globe, investigations in the lab, and analysis of vast biological datasets, the Institute's scientists work to understand the evolution and interconnectedness of organisms and ecosystems, the threats they face around the world, and the most effective strategies for sustaining them into the future. Through innovative partnerships and public engagement initiatives, they also guide critical sustainability and conservation decisions worldwide, inspire and mentor the next generation of scientists, and foster responsible stewardship of our planet.

Caption: Despite living just off the coast of bustling Sydney, Australia, this pipefish, Stigmatophora harastii, was only just discovered.

Caption: The new-to-science sea slug Chromodoris kalawakan. 'Kalawakan' means 'galaxy' in Filipino, a tribute to the nudibranch's native habitat and its stellar coloration.