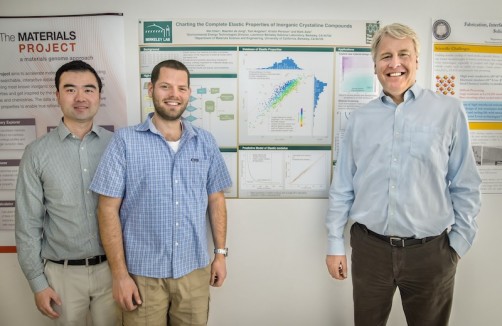 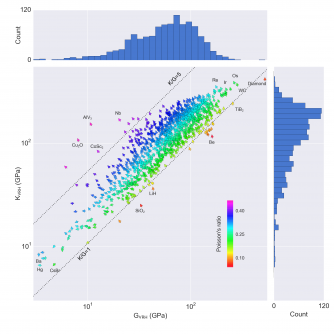 This is a graphical representation of the dataset, showing volume per atom (represented by arrow direction), shear modulus (x-axis), bulk modulus (y-axis), and Poisson’s ratio (color) for all the compounds calculated. For comparison, the actual values for diamond, the hardest known material, as well as other compounds, are also plotted.

Newswise — Scientists at the Department of Energy’s Lawrence Berkeley National Laboratory (Berkeley Lab) have published the world’s largest set of data on the complete elastic properties of inorganic compounds, increasing by an order of magnitude the number of compounds for which such data exists.

This new data set is expected to be a boon to materials scientists working on developing new materials where mechanical properties are important, such as for hard coatings, or stiff materials for cars and airplanes. While there is previously published experimental data for approximately a few hundred inorganic compounds, Berkeley Lab scientists, using the infrastructure of the Materials Project, have calculated the complete elastic properties for 1,181 inorganic compounds, with dozens more being added every week.

Harnessing the power of the Materials Project

The Materials Project is a Google-like database of material properties aimed at accelerating innovation; it uses supercomputers to calculate the properties of all known materials based on first-principles quantum-mechanical frameworks. Co-founded and co-led by Persson and MIT’s Gerbrand Ceder, the Materials Project has attracted more than 10,000 users since launching in 2011.

The elastic properties of a material are important for material design but quite difficult and tedious to measure experimentally, according to Asta, a Berkeley Lab materials scientist who is also chair of the Department of Materials Science and Engineering at UC Berkeley. A compound’s elastic constant is not just one number but a whole tensor, or array of numbers, because the direction in which a material is being pulled or sheared matters.

“In a crystal, the atoms are stacked in certain ways,” he explained. “If one pulls in one direction, they will measure the stiffness of bonds between a certain arrangements of atoms, but if one pulls in a different direction, the stiffness of different combinations of bonds are measured. So the relationship between force and displacement depends on the direction of the force relative to the arrangement of atoms that make a crystal structure. And in addition to pulling there’s also shearing. So the elastic constant tensor can have up to 21 independent numbers.”

Being able to measure all this in the lab requires high-quality materials and equipment, which is one reason for the dearth of experimental data. The Berkeley Lab researchers estimated that no more than 200 materials have been characterized experimentally for their full elastic constant tensor.

Another reason the elastic tensor data has been lacking is that methods for performing calculations of this property in a high-throughput manner have become available only recently. “The computational methods have been available for quite some time, probably at least 20 years, but it’s the infrastructure of the Materials Project that has enabled us to automate the whole process,” said Chen, one of the lead co-authors. “These calculations are tricky to do. Even this year, you can find papers where they have run a calculation for just one elastic constant.”

Asta explained that the Materials Project infrastructure allows the development of custom workflows, and efficient interfacing to the supercomputers, such as those at Berkeley Lab’s National Energy Research Scientific Computing Center (NERSC), which were used in the calculations. “The Materials Project infrastructure enables a calculation to recover when something’s not happening right,” he said.

Study yields big surprise: new thermoelectric material discoveredWhat makes this data even more useful is that the elastic constant can be used to predict some other useful material properties, including thermal conductivity, which is very difficult to calculate. “From a materials design standpoint, what’s really intriguing about the elastic constant is that it correlates with much more complex properties of a material, so it can be used as a way of screening for other properties,” said Asta.

In fact, in running a large-scale screening of materials, the Berkeley Lab scientists have discovered a new thermoelectric material, which will be described in a forthcoming paper. Thermoelectrics convert heat to energy and should have low thermal conductivity; finding a new thermoelectric material that is significantly cheaper or more efficient could lead to a breakthrough energy technology to convert waste heat to electricity.

“We had our experimental collaborators successfully synthesize the material, and they validated our prediction,” Chen said. “So it is very promising. We are now doing more work to further enhance its properties while also doing a larger-scale screening to look for even better thermoelectric materials.”

The compound they found belongs to a new class of compounds that was not being explored for thermoelectrics.

Future work: let the machine do the learningThere are an estimated 50,000 inorganic compounds; given enough time, the Materials Project could eventually calculate the elastic tensor for all of them. But the scientists are now looking at how the process can be accelerated even more. “We want to use statistical learning to extract information to build predictive models in order to predict the elastic constants,” Chen said.

For example, machine-learning algorithms have identified the volume per atom of a material as a key descriptor of the material’s bulk modulus, which is a measure of the pressure required to change the volume of a material.

“If we can come up with a trained algorithm that can relate elastic properties to very simply computed properties that we already have from the Materials Project or from experiments, then we can make predictions across a much broader range of materials,” Asta said.

The Materials Project is funded by the Department of Energy’s Office of Science. This study made extensive use of the resources at NERSC. 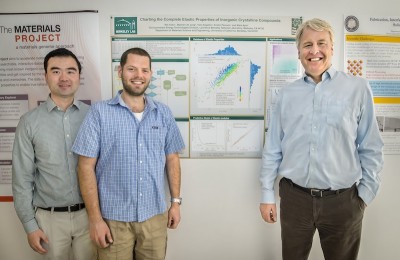 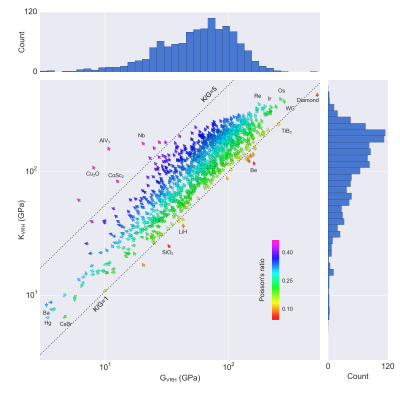 Caption: This is a graphical representation of the dataset, showing volume per atom (represented by arrow direction), shear modulus (x-axis), bulk modulus (y-axis), and Poisson’s ratio (color) for all the compounds calculated. For comparison, the actual values for diamond, the hardest known material, as well as other compounds, are also plotted.