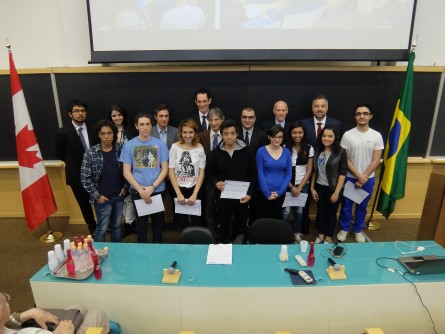 Representatives from UNESP-SAIFR, Perimeter Institute, and the Canadian Embassy in Brazil celebrate the new partnership.

Newswise — Nov. 8, 2016 (São Paulo, Brazil) – Perimeter Institute in Canada and the South American Institute for Fundamental Research (SAIFR), located at the São Paulo State University (UNESP) in Brazil, have formed a partnership to support exceptional young physicists and provide them with access to excellence.

The collaboration was officially celebrated today with dignitaries – including the Canadian Ambassador to Brazil – in a special ceremony held during the Advancement of Science in South America symposium.

The UNESP-SAIFR-PERIMETER partnership will encourage:

• Training programs for emerging talent at the graduate and postdoctoral levels in South America, including special schools and workshops held in Brazil• Opportunities for talented students to attend the renowned Perimeter Scholars International (PSI) graduate program in Ontario, Canada• Educational outreach to middle and secondary schools in South America, engaging youth in the power of scientific and mathematical thinking and training teachers in the use of Perimeter Institute in-class resources throughout school systems• Events for the broader public on the power and wonder of science• Research exchanges and joint scientific conferences between the two institutesA cornerstone of the partnership will involve a shared Faculty member, Dr. Pedro Vieira, who will divide his time between Perimeter and SAIFR in order to maximize collaboration opportunities.

“Brilliant young people are the lifeblood of this basic field of scientific research, where one breakthrough can literally change the world” said Neil Turok, Director of Perimeter. “The values that drive Perimeter’s success – the pursuit of ambitious research goals and the promotion of access to excellence for all – align closely with those of SAIFR at UNESP. We see this as an exceptional opportunity to work together and catalyze rising talent throughout South America while increasing scientific interaction between Canada and the continent.”

On behalf of colleagues at UNESP, ICTP-SAIFR Director Nathan Berkovits said: “We are very pleased to collaborate with one of the world’s leading institutes. Perimeter’s global perspective makes it an ideal partner. Our first joint activities are already showing impact, and there is no limit to what we can achieve together to support the work of talented young scientists.”

Rick Savone, the Government of Canada’s Ambassador to Brazil, said the partnership is “a solid example of international collaboration between the two countries.

“Innovation is a critical driver to the growth of our two economies, as we each try to expand the middle class. We celebrate the foresight of these organizations in coming together, and the determination to maximize opportunities for the research community and others at all age levels. We are pleased to honour this partnership and look forward to working with the leadership on advancing the work of UNESP-SAIFR-PERIMETER in Brazil and beyond.”