Acidification impedes shell development of plankton off the US West Coast

This close-up image of two pteropods of the species Limacina helicina provides a sense of how fragile the carbonate shells of the tiny sea snails are. 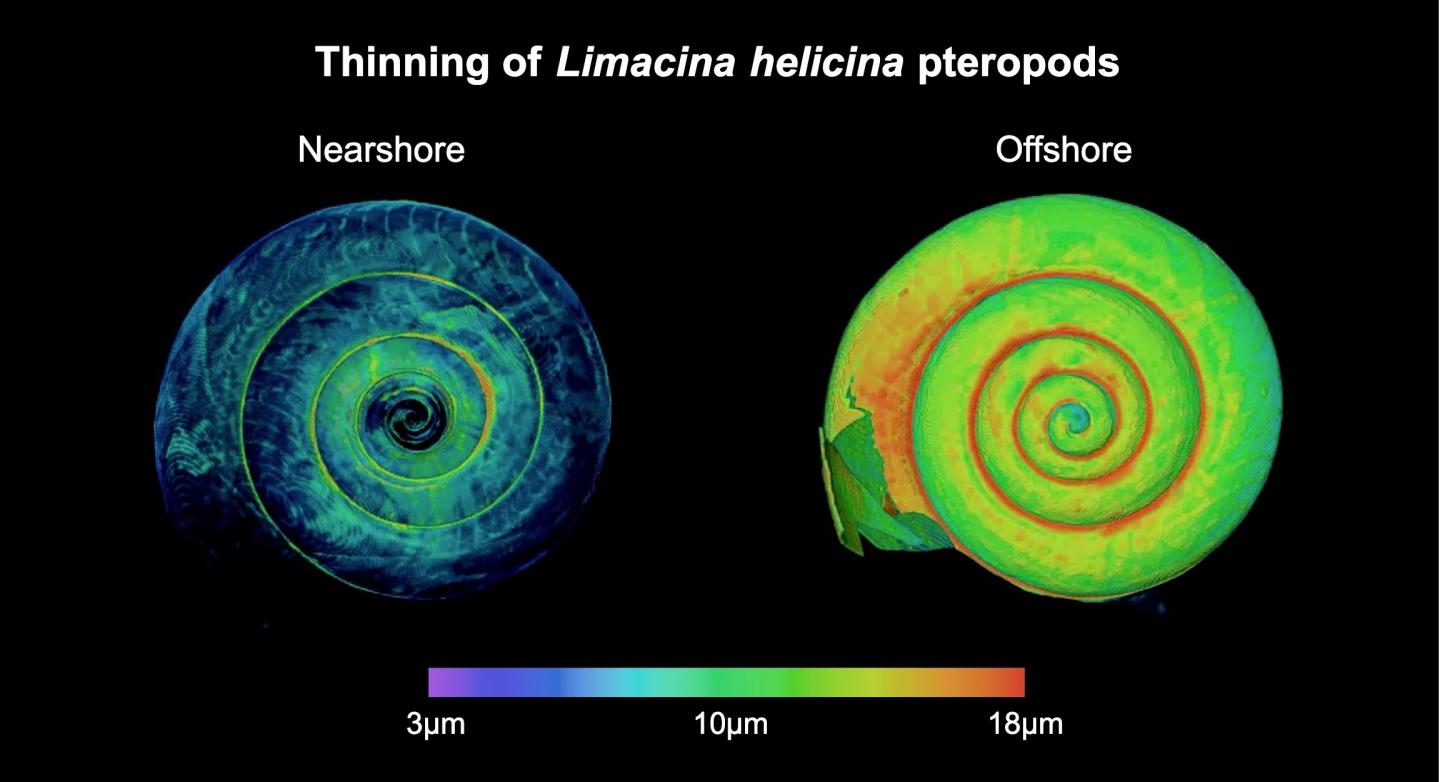 This image depicts the difference in thickness between two specimens of the pteropod Limacina helicina, one collected in more acidified coastal waters, the other collected off shore, that were analyzed as part of a new study published in Science Reports.

Newswise — Shelled pteropods, microscopic free-swimming sea snails, are widely regarded as indicators for ocean acidification because research has shown that their fragile shells are vulnerable to increasing ocean acidity.

A new study, published in the journal Scientific Reports, shows that pteropods sampled off the coasts of Washington and Oregon made thinner shells than those in offshore waters. Along the coast, upwelling from deeper water layers brings cold, carbon dioxide-rich waters of relatively low pH to the surface. The research, by a team of Dutch and American scientists, found that the shells of pteropods collected in this upwelling region were 37 percent thinner than ones collected offshore.

Sometimes called sea butterflies because of how they appear to flap their "wings" as they swim through the water column, fat-rich pteropods are an important food source for organisms ranging from other plankton to juvenile salmon to whales. They make shells by fixing calcium carbonate in ocean water to form an exoskeleton.

"It appears that pteropods make thinner shells where upwelling brings water that is colder and lower in pH to the surface, " said lead author Lisette Mekkes of Naturalis Biodiversity Centers and the University of Amsterdam in the Netherlands. Mekkes added that while some shells also showed signs of dissolution, the change in shell thickness was particularly pronounced, demonstrating that acidified water interfered with pteropods' ability to build their shells.

The scientists examined shells of pteropods collected during the 2016 NOAA Ocean Acidification Program research cruise in the northern California Current Ecosystem onboard the NOAA Ship Ronald H. Brown. Shell thicknesses of 80 of the tiny creatures - no larger than the head of a pin - were analyzed using 3D scans provided by micron-scale computer tomography, a high-resolution X-ray technique. The scientists also examined the shells with a scanning electron microscope to assess if thinner shells were a result of dissolution. They also used DNA analysis to make sure the examined specimens belonged to a single population.

"Pteropod shells protect against predation and infection, but making thinner shells could also be an adaptive or acclimation strategy," said  Katja Peijnenburg,  group leader at Naturalis Biodiversity Center. "However, an important question is  how long can pteropods continue making thinner shells in rapidly acidifying waters?"

The California Current Ecosystem along the West Coast is especially vulnerable to ocean acidification because it not only absorbs carbon dioxide from the atmosphere, but is also bathed by seasonal upwelling of carbon-dioxide rich waters from the deep ocean. In recent years these waters have grown increasingly corrosive as a result of the increasing amounts of atmospheric carbon dioxide absorbed into the ocean.

"Our research shows that within two to three months, pteropods transported by currents from the open-ocean to more corrosive nearshore waters have difficulty building their shells," said Nina Bednarsek, a research scientist from the Southern California Coastal Water Research Project in Costa Mesa, California, a coauthor of the study.

Over the last two-and-a-half centuries, scientists say, the global ocean has absorbed approximately 620 billion tons of carbon dioxide from emissions released into the atmosphere by burning fossil fuels, changes in land-use, and cement production, resulting in a process called ocean acidification.

"The new research provides the foundation for understanding how pteropods and other microscopic organisms are actively affected by progressing ocean acidification and how these changes can impact the global carbon cycle and ecological communities," said Richard Feely, NOAA Pacific Marine Environmental Laboratory and chief scientist for the cruise.

Caption: This close-up image of two pteropods of the species Limacina helicina provides a sense of how fragile the carbonate shells of the tiny sea snails are.

Caption: This image depicts the difference in thickness between two specimens of the pteropod Limacina helicina, one collected in more acidified coastal waters, the other collected off shore, that were analyzed as part of a new study published in Science Reports.