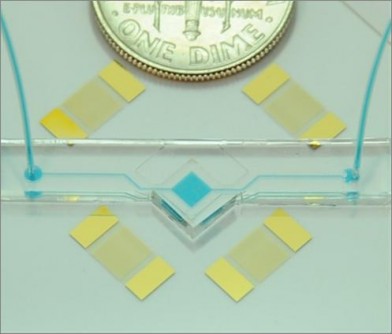 - A miniaturized ultrasonic device capable of capturing and moving single cells and tiny living creatures is compared to a U.S. dime. 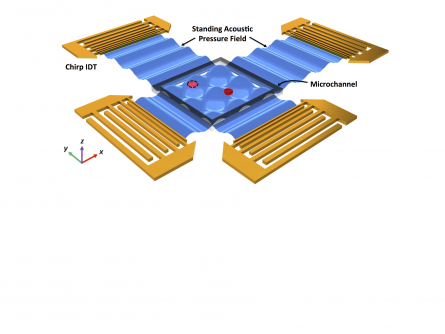 Newswise — A team of bioengineers and biochemists from Penn State University has demonstrated a device about the size of a dime that is capable of manipulating objects, including living materials such as blood cells and entire small organisms, using sound waves. Their research is published online this week in the Proceedings of the National Academy of Sciences (PNAS).

The device, called acoustic tweezers, is the first technology capable of touchlessly trapping and manipulating Caenorhabditis elegans (C. elegans), a one millimeter long roundworm that is an important model system for studying diseases and development in humans. Acoustic tweezers are also capable of precisely manipulating cellular-scale objects that are essential to many areas of fundamental biomedical research.

Acoustic tweezers use ultrasound, the same noninvasive technology doctors use to capture images of the fetus in the womb. The device is based on a piezoelectric material that produces mechanical motion when an electrical current is applied. The vibrations pass through transducers attached to the piezoelectric substrate where they are converted into standing surface acoustic waves (SAWs). The SAWs create pressure fields in the liquid medium that hold the specimen. The simple electronics in the device can tune the SAWs to precisely and noninvasively hold and move the specimen or inorganic object. “We believe the device can be easily manufactured at a cost far lower than say, optical tweezers, which use lasers to manipulate single particles,” says Penn State associate professor of bioengineering Tony Jun Huang, whose group pioneered acoustic tweezers. “Optical tweezers require power densities 10,000,000 times greater than our acoustic tweezers, and the lasers can heat up and damage the cells, unlike ultrasound.”

For many biological systems, acoustic tweezers will provide an excellent tool to mimic the conditions inside the body where cells are subject to waves of pressure and pulses of chemicals. According to Stephen Benkovic, Evan Pugh professor of chemistry and holder of the Eberly family chair in chemistry at Penn State, whose group contributed to the paper, “Acoustic tweezers will be used to position cells for interrogation by pulses of drug-like molecules to test as well as to exert mechanical forces on the cell wall. The cells will contain bio-chemical markers, so we can observe the effect of drug pulses or pressure on the cell’s biochemistry.”

Acoustic tweezers are very versatile, says Huang. “We can manipulate a single cell or we can manipulate tens of thousands of cells at the same time.” Currently, the size of objects that can be moved with acoustic tweezers ranges from micrometers to millimeters, although with higher frequencies, it should be possible to move objects in the nanoscale regime, they believe. Further work will include modifying the device to accommodate more fundamental biomedical studies with the Benkovic group. Ultimately, the patent pending technology could lead to compact, noninvasive, and inexpensive point-of-care applications, such as blood cell and cancer cell sorting and diagnostics. For now, the ability to trap and manipulate a living C. elegans for study is proof of their device’s potential utility.

Proceedings of the National Academy of Sciences (online, June 25,2012)