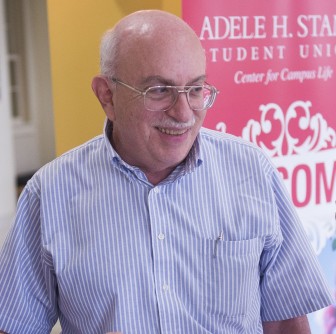 Arthur N. Popper has been selected to be the new Editor of Acoustics Today magazine, published by the Acoustical Society of America (ASA). He began his service in this position on 1 January 2014, succeeding Dick Stern, who was the founding Editor of the magazine.

Newswise — Melville, NY (Jan. 27, 2014) – Arthur N. Popper has been selected to be the new Editor of Acoustics Today magazine, published by the Acoustical Society of America (ASA). He began his service in this position on 1 January 2014, succeeding Dick Stern, who was the founding Editor of the magazine.

“I’m very excited to be taking over as editor of Acoustics Today, Popper said. “My goal is to build upon the excellent magazine that Dick Stern created and nurtured. My vision is to have articles that are understood by all members of ASA, and also to position Acoustics Today so that it is the place where a far broader audience goes for information about acoustics. I also am working towards our having an Acoustics Today web site where articles are easily accessed and searched so anyone can find material of interest to them.”

Arthur Popper is a Professor in the Department of Biology at the University of Maryland, College Park, and serves as Co-Director of the Center for Comparative and Evolutionary Biology of Hearing and Senior Advisor for STEM in the Graduate School. He received a Ph.D. degree from the City University of New York in 1969.

Popper’s work in acoustics has primarily involved the study of hearing by aquatic organisms. His current research is involved with studies on the effects of human-generated (anthropogenic) sound on aquatic organisms. He has is author or coauthor of over 200 peer-reviewed papers, and is a Fellow of the Acoustical Society of America and the American Association for the Advancement of Science. Popper is also editor of the Springer Handbook of Auditory Research, a multi-volume series of books on all aspects ofhearing.

“As the flagship magazine of the Acoustical Society of America, Acoustics Today requires an editor who embraces the diversity of the profession and who thinks broadly about the field, whether applied or theoretical,” said Susan Fox, ASA’s Executive Director. ‘With the selection of Arthur Popper as the magazine’s next editor we are richly endowed with both attributes. He brings boundless energy, creativity and expertise to the position. He is sure to tap in to the many fertile streams of thought and practice that exist throughout the ASA membership and translate them for the general audience. This is an exciting time in ASA’s history. We welcome him with enthusiasm and look forward to his leadership in creating a vibrant future for Acoustics Today.”

ABOUT THE ACOUSTICAL SOCIETY OF AMERICAThe Acoustical Society of America (ASA), headquartered in Melville, NY, is the premier international scientific society in acoustics devoted to the science of technology of sound. Its 7,500 members worldwide represent a broad spectrum of the study of acoustics. ASA publications include The Journal of the Acoustical Society of America—the world's leading journal on acoustics, Acoustics Today magazine, and books and standards on acoustics. The Society also holds two major scientific meetings each year. For more information about the ASA, visit our website at http://acousticalsociety.org.