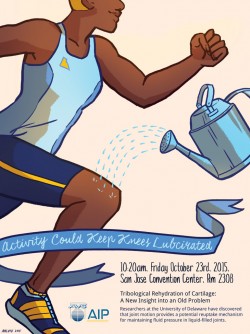 Newswise — WASHINGTON, D.C., October 21, 2015 -- As you sit and read this at your desk, fluid is slowly leaking out of the porous cartilage in your knee into a membrane-walled cavity between your upper and lower leg bones.

Cartilage is filled with fluid -- about 80% of the volume of the cartilage tissue -- that plays the essential roles of supporting weight and lubricating joint surfaces. Loss of this fluid, called synovial fluid, results in a gradual decrease in cartilage thickness and increase in friction, which is related to the degradation and joint pain of osteoarthritis.

Since cartilage is porous, fluid is readily squeezed out of the holes over time. Yet the symptoms associated with osteoarthritis usually take decades to develop.

“The important question is why cartilage doesn’t deflate over the course of days, months or years in our joints,” said David Burris, an assistant professor in the Mechanical Engineering Department at the University of Delaware. Burris and his colleagues have proposed a mechanism that explains how motion can cause cartilage to reabsorb liquid that leaks out. Burris will speak about his research during the AVS 62nd International Symposium and Exhibition, held Oct. 18-23 in San Jose, Calif.

Burris and his colleagues are not the first to study cartilage deflation. In 1995, a group at Columbia led by Gerard Ateshian used theory to show that continuous knee movement could prevent the deflation process if it occurred faster than the fluid could respond. In 2008, Ateshian's group demonstrated this phenomenon for the first time using a small sphere articulated against a cartilage plug, showing that interstitial pressure was maintained indefinitely if the contact area moved faster than the diffusive speed of the synovial fluid.

"This study was the first direct evidence that interstitial pressure is a viable mechanism of long term load support and lubrication," Burris said. "However, it was unclear to us how our joints could prevent deflation given the long periods of time we spend sitting and standing each day without some active input mechanism." That is, there must be some way for the cartilage to reabsorb the fluid that leaks out when we're not moving.

Burris had a hunch that the reabsorption process was driven by hydrodynamic pressurization, which occurs whenever the relative motion of two surfaces causes fluid between them to accelerate in the shape of a triangular wedge. For example, when a normal tire travels over water at a high speed, pressure builds until a film forms to lubricate the interface; this is called hydroplaning, and results in a complete loss of frictional control. If the tire were porous, however, the exterior fluid pressure could force fluid back into the tire.

To investigate whether hydrodynamic pressurization could refill deflated cartilage, Burris and A.C. Moore, a Ph.D. student, placed larger-than-average cartilage samples against a glass flat to ensure the presence of the necessary wedge. They found that at slow sliding speeds (less than would occur in a joint at typical walking speeds) cartilage thinning and an increase in friction occurred over time, but as the sliding speed increased toward typical walking speeds, the effect was reversed.

Since their experiment involved stationary contacts -- in which contact between glass and cartilage occurs at a single site rather than moving across the entire surface of the cartilage plug -- their results couldn't be explained by migrating contact theory, like the Ateshian group's. Burris believes that hydrodynamic pressures, which force fluid flow into the cartilage, must have counteracted the fluid lost to exudation.

"We observed a dynamic competition between input and output [of synovial fluid]," Burris said. "We know that cartilage thickness is maintained over decades in the joint and this is the first direct insight into why. It is activity itself that combats the natural deflation process associated with interstitial lubrication."

Future work for Burris and his colleagues includes exploring the implications for osteoarthritis (OA), which is associated with the degradation of cartilage.

Presentation TR+AS+BI+NS-FrM7, “Tribological Rehydration of Cartilage: A New Insight into an Old Problem,” is at 10:20 a.m. on Friday, Oct. 23.