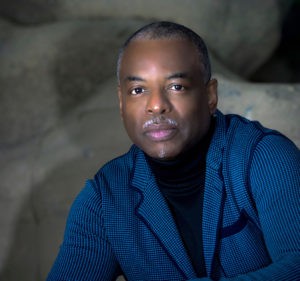 Newswise — CLEVELAND—LeVar Burton, a celebrated American actor, director, producer and writer for more than 40 years, is adding another accolade—this one for his tireless, decades-long dedication to children’s literacy and AIDS research and treatment.

This fall, the Inamori International Center for Ethics and Excellence at Case Western Reserve University will award the 2019 Inamori Ethics Prize to Burton for his outstanding global ethical leadership as an advocate for such important and worthy causes.

“I couldn’t have been more surprised by the news,” Burton said. “This is a very prestigious honor, and as the first recipient from the field of the Arts, I look forward to being able to accept the prize and thank the committee in person.”

Burton will be awarded the prize and deliver a free public lecture about his work as part of an academic symposium and panel discussion during Inamori Center events Sept. 19-20 on the Case Western Reserve campus in Cleveland.

“I'm delighted to have LeVar Burton as our first prize-winner from the Arts,” said Shannon E. French, Inamori Professor in Ethics and director of the Inamori International Center for Ethics and Excellence. “His work for children's literacy has had such profound impact. He has truly transformed lives through PBS's Reading Rainbow and his nonprofit work. And he has also been a change agent in support of more funding for AIDS research.

“Beyond these enduring contributions,” French said, “as an actor he made the world confront the inhumanity of slavery with his searing, unforgettable performance as Kunta Kinte in Roots and helped us all imagine a better, more just future as a star of Star Trek: The Next Generation. He's a wonderful example of what it is to be an ethical leader in the arts, and I know he will inspire our students and our community.”

Burton is best known for hosting Reading Rainbow, a children’s program launched in 1983 on PBS to foster and inspire a love of reading, and for his roles in Star Trek: The Next Generation and the 1977 award-winning ABC television miniseries Roots.

Reading Rainbow ran for 23 seasons, making it one of the longest-running children's programs on PBS. The program received a Peabody Award and 26 Emmy Awards—11 of which were for Outstanding Children's Series. Burton, himself, won 12 Emmy awards for the show.

And he’s long been involved in charitable ventures, using his award-winning talent and influence to benefit children’s literacy and development, as well as AIDS research and treatment.

Burton serves on the board of directors for the AIDS Research Alliance (ARA), a non- profit, medical research organization dedicated to finding a cure for AIDS. The ARA helps fast-track HIV-treatment medications and conducts clinical trials for many pharmaceutical companies.

The Inamori Center was endowed by a generous gift from Kazuo Inamori, who established Kyocera Corp. and is a global telecommunications leader and founder of the Inamori Foundation that presents the annual Kyoto Prize in Kyoto, Japan.