It's a pillow fight for autoimmune disease awareness. 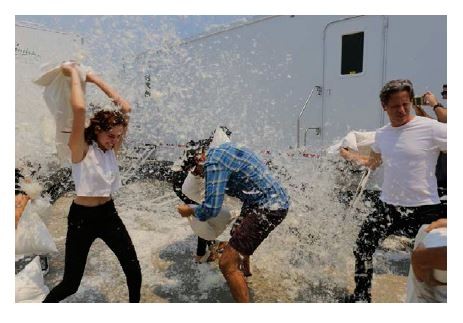 The cast of "Chasing Life" have a pillow fight to spread autoimmune diseases awareness on behalf of AARDA.

Timed with last night’s premiere of season two of Chasing Life, Haley and castmates Richard Brancatisano (@richardbrancat), Aisha Dee (@aishadee), Steven Weber (@TheStevenWeber) and Jessica Meraz (@jessicameraz) have released a video on their social media channels having a pillow fight in their pajamas and challenging the casts of other ABC Family and other network television shows, as well as individuals and organizations across the country to take the PJ Challenge for AARDA.

“AARDA and the 50 million Americans with autoimmune diseases and their families, are giving a standing ovation to Haley, Richard, Aisha, Steven and Jessica and the entire cast of ABC Family’s Chasing Life for helping to bring significant attention not just to autoimmune disease, but to the extreme fatigue that plagues many patients,” said Virginia Ladd, Founder and Executive Director, AARDA. “Many autoimmune disease (AD) patients have what they call their ‘pajama days.’ Those days when the fatigue is so bad, it’s hard for them to accomplish everyday tasks like taking a shower, getting dressed, caring for their children and going to work.”

It was that personal understanding of extreme fatigue as an AD patient that led Michigan resident Kim Radomski to spearhead the Pajama Challenge to support AARDA. Since she released her first video earlier this year, scores of videos have popped up from all around the world. Familiar faces like AARDA’s national spokesperson Kellie Martin (@Kellie_Martin) and actress Melissa Joan Hart (@MelissaJoanHart) have shared videos as well.

In March, during National Autoimmune Disease Awareness Month, AARDA released the results of a survey of more than 7,800 autoimmune patients that found fatigue is a major issue that impacts nearly every aspect of their lives. Nearly all reported experiencing “profound,” “debilitating” fatigue that “prevents them from doing the simplest everyday tasks.” It affects their mental and emotional well-being and their ability to work. While most AD patients have discussed their fatigue with their physicians, many have not been prescribed treatment for their fatigue. And, many report that friends and family don’t understand the depth of their fatigue either.

About AARDAAmerican Autoimmune Related Diseases Association (AARDA) is the nation's only non-profit organization dedicated to bringing a national focus to autoimmunity as a category of disease and a major women's health issue, and promoting a collaborative research effort in order to find better treatments and a cure for all autoimmune diseases. For more information, please visit www.aarda.org.