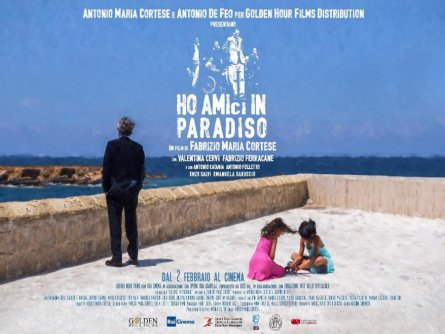 Newswise — The Sbarro Health Research Organization at Temple University, under the direction of Dr. Antonio Giordano, usually collaborates with Italian scientists working both in the U.S. and Italy. But today, the organization is praising a group of Italian filmmakers for their contribution to medicine through the arts. Their film, Ho Amici In Paradiso [I Have Friends in Heaven], will screen this week at the Los Angeles Italia Film, Fashion, and Art Fest.

“I Have Friends in Heaven is a great achievement in the honest and sympathetic portrayal of people with disabilities,” Dr. Giordano said. “The Sbarro Health Research Organization at Temple University is very interested in participating in research and assisting people with a cognitive impairment, intellectual disability, and mental illness.”

Director Fabrizio Cortese’s film tells the story of a troubled man who finds meaning in life after working with the disabled at the Opera Don Guanella, a Catholic Servants of Charity organization serving people with disabilities in Rome.

After screening at the Rome International Film Festival in 2016 and gaining recognition from Pope Francis, the film will screen at the Hollywood TCL Chinese Theater on February 22. Director Fabrizio Maria Cortese will attend, along with Michele Iannaccone and Stefano Scarfini, two of the disabled actors from the Center who performed in the film.

The festival is supported by the Italian Consulate in Los Angeles to promote Italian excellence in the arts.

Also in attendance will be producer Antonio Maria Cortese, and a delegation from the 'Opera Don Guanella' rehabilitation center in Rome, including the Chief of Casa San Giuseppe Don Pino Venerito, and medical director Simonetta Magari. The rest of the cast included five other disabled actors from the Opera Don Guanella, as well as veterans of Italian stage and screen Valentina Cervi, Fabrizio Ferracane, Antonio Catania, Antonio Folletto, Enzo Salvi and Emanuela Garuccio.

Synopsis of the FilmFelice Castriota is an impulsive and superficial person who lives in the South of Italy as an accountant. Both his recklessness and greed for money bring him to tighten ties with crime. One day he is discovered. The State's attorney of Lecce proposes assignment as a social worker to Felice as an alternative to jail. At Centro Don Guanella, a Catholic charity for the disabled, everything changes. In fact, he gains awareness about his mistakes and the important things in life, thanks to the entire group of disabled people he encounters during his amazing rehabilitation path.

I Have Friends in Heaven press kil