University of Kansas associate professor Marta Vicente talks about her essay (http://bit.ly/2snIzvU) on 18th century Spanish celebrity actresses who used femininity to challenge norms and tenets of the Spanish Enlightenment that centered around expectations on how women should act. 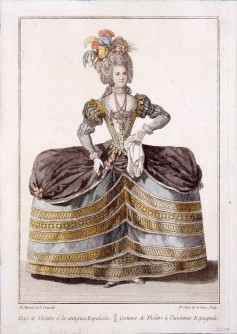 Newswise — LAWRENCE — One of the marks of the foundation of 18th century Spanish Enlightenment was the ideal of women as displaying virtues such as loyalty, honor, honesty, obedience and resignation.

But, according to a University of Kansas researcher who specializes in European women's history, gender and sexuality, actresses, such as María Ladvenant, challenged those notions with their behind the scenes and onstage behavior. Women like Ladvenant — also known as “The Divine” —, La Portuguesa "The Portuguese," and Mariana Alcázar, were all recognizable celebrities in 1760s Madrid.

"These actresses were totally mocking and bypassing these tenets of the Enlightenment, and the public knew it. They loved it," said Marta Vicente, a University of Kansas associate professor of history and women, gender and sexuality studies.

In her recent essay "Staging Femininity in Early Modern Spain," Vicente examines the role of Ladvenant and other actresses, known as the tonadilleras, and how they worried the writers and intellectuals, known as ilustrados, who championed the Spanish Enlightenment. The ilustrados hoped to communicate the Enlightenment's main goals to liberate individuals from the yoke of their uncontrolled emotions by using their reason. This often meant in public presenting a moral message intended for social utility, especially in the theater.

Vicente examined documents from the Archivo Histórico Nacional in Madrid that included a 1764 complaint filed with the municipal government about a play starring Ladvenant — often referred to as the first lady of Spanish theater — not starting on time, as prescribed by law.

The investigation revealed how authorities faced difficulties in dealing with Ladvenant and other popular actresses. At one point, she told an investigating officer to "shut up," and the play eventually started well after another actress had arrived, which she said was the reason for the hold up. Documents reveal officers basically issued her a notice to obey start times by law in the future, as a warning, though appearing to be a somewhat toothless response.

"If they were doing anything to her, they were facing popular riots," Vicente said. "It shows the limits of the project of the Enlightenment. On one hand you have the politicians, philosophers and writers who followed this program of how to educate people, to create this new society or order and reason, and then you have this group of people who with their behavior jeopardized this very same concept of the ideal of womanhood."

The tonadilleras were more famous for their promiscuous sexuality, having children outside of wedlock and being married several times.

"Their main interest was not only to promote their own celebrity and their persona, but also to please the audience. One of the things that pleased the audience was the tonadillera’s telling of gossipy stories and events in their performances, which brought in their audience emotional responses, rather than following educational stories that the Enlightenment project demanded," Vicente said.

The actresses exhibited excessive femininity, which jeopardized the project of the Enlightenment asking for women to be first and most of all mothers and wives, she said.

"They were challenging that by dressing with excessive adornment and their laughter when they interacted with the public," Vicente said. "They were getting away with all of this because they were similar to modern day 'celebrities.' And they were doing all of this in the theater, which was meant to be one of the venues to put forward this project of the Enlightenment."

This case illustrates that the Spanish Enlightenment and those seeking to communicate its ideals still faced challenges. It also provides valuable examples of social issues today, including treatment of the celebrity culture and gender equity, she said.

"The Enlightenment faced criticism not only from the elites and the thinkers themselves, many of whom were men," Vicente said, "but also from ordinary people, in this case women, who were not supposed to speak up or respond in such a way."

Vicente's essay appears in a recent volume of the book "The Early Modern Hispanic World: Transnational and Interdisciplinary Approaches," edited by Kimberly Lynn, of Western Washington University, and Erin Kathleen Rowe, of Johns Hopkins University. The book is published in honor of Richard Kagan, Academy Professor and Arthur O. Lovejoy Professor Emeritus of History at Johns Hopkins. Kagan, a well-known scholar on the history of early modern Europe, was Vicente's graduate adviser.