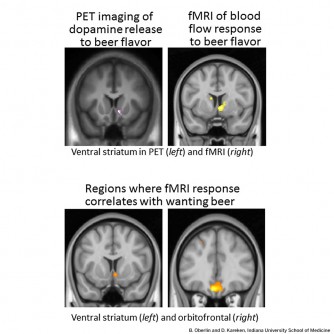 B. Oberlin and D. Kareken, Indiana University School of Medicine.

Newswise — INDIANAPOLIS – If you really want a drink right now, the source of your craving may be a pea-sized structure deep inside the right side of your brain, according to scientists at the Indiana University School of Medicine.

Using two different kinds of advanced brain imaging techniques (PET and fMRI), the researchers compared the results of giving beer drinkers a taste of their favorite beer versus a sports drink. After tasting the beer the participants reported increased desire to drink beer, whereas the sports drink did not provoke as much desire for beer. The brain scans also showed that the beer flavor induced more activity in both frontal lobes and in the right ventral striatum of the subjects’ brains than did the sports drink.

More specifically, both methods of brain imaging showed increased activity in the right ventral striatum, a deep structure inside the brain that is linked to motivated behavior and reward. The researchers previously showed that beer flavor triggered dopamine release; the addition of fMRI showed that craving for alcohol correlated with frontal as well as right ventral striatum activation. The study was published recently in the journal Alcoholism: Clinical and Experimental Research.

In an earlier study of 49 men, the research team, led by David A. Kareken, Ph.D., professor of neurology at the IU School of Medicine and the deputy director of the Indiana Alcohol Research Center, found that just the taste of beer, without any intoxicating effects of alcohol, was enough to cause the release of dopamine, a brain neurotransmitter. Much research has linked dopamine to consumption of drugs of abuse.

The new study was conducted with 28 beer drinkers who had participated in the first study, who then underwent functional magnetic resonance imaging – fMRI scans – during the separate beer and Gatorade tastings.

"We believe this is the first study to use multiple brain imaging modalities to reveal both increased blood oxygen levels and dopamine activity in response to the taste of an alcoholic beverage," said Brandon G. Oberlin, Ph.D., assistant research professor of neurology and first author of the paper. "The combination of these two techniques in the same subjects strengthens the evidence that these effects may be strongest in the right ventral striatum.

"Our results indicate that the right ventral striatum may be an especially important area for addiction research," Dr. Oberlin said.

In addition to Drs. Oberlin and Kareken, investigators contributing to the research were Mario Dzemidzic, Jaroslaw Harezlak, Maria A. Kudela, Stella M. Tran, Christina M. Soeurt and Karmen K. Yoder of the IU School of Medicine.