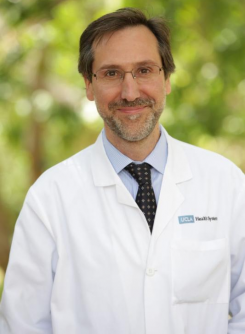 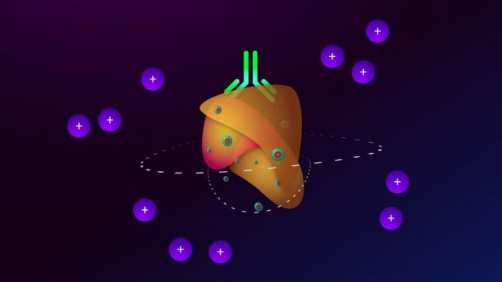 The orange object is a tumor,circles with + symbols represent CD8+ cells, the light green form (top center) is pembrolizumab, and the green circles with red centers represent T-VEC cells.

Previous Next
FINDINGS
In a two-year UCLA-led study, nearly two-thirds of people with advanced melanoma responded positively to a treatment that combines the immunotherapy drug pembrolizumab with a herpes virus called talimogene laherpareovec, or T-VEC. Researchers led by Dr. Antoni Ribas found that the treatment's side effects were manageable, and comparable to side effects for people who took either pembrolizumab or T-VEC as a standalone treatment.
BACKGROUND
UCLA scientists are testing the combination of pembrolizumab (marketed as Keytruda) and T-VEC (marketed as Imlygic) as a treatment option for people with advanced melanoma that doesn't fully respond to either treatment separately.
T-VEC is a genetically modified version of the herpes simplex virus that causes cold sores, but is safe to use. T-VEC has already been approved for the treatment of melanoma and it works both by directly killing cancer cells and using a protein that attracts immune cells into the cancers. Pembrolizumab has become a standard-of-care treatment for advanced melanoma, and it is also being used to treat non-small-cell-lung cancer, cancers of the head, neck, kidney and bladder, and Hodgkin's disease. It works by taking the "brakes" off of the body's immune system, enabling it to attack cancer.
According to Ribas, people whose melanoma does not respond to pembrolizumab often lack a type of T cell called CD8+ in their tumors; the lack of CD8+ cells seems to prevent immunotherapy drugs from working. But the researchers believe those people might benefit from a combination therapy, because T-VEC attracts CD8+ immune cells to the tumors and pembrolizumab allows them to attack the cancer cells.
METHOD
The phase 1 clinical trial evaluated 21 people with advanced melanoma. Researchers injected patients' melanoma tumors with T-VEC for six weeks and then gave them infusions of pembrolizumab. Sixty-two percent of the patients had a partial or complete response, meaning that their tumors either shrank or were no longer detectable.

IMPACT
The combination therapy could provide an alternative treatment for people with melanoma whose tumors don't respond to other therapies. It also being tested in  people with head, neck and colon cancers.
AUTHORS
Ribas, the study's lead author, is director of the immunology program at UCLA's Jonsson Comprehensive Cancer Center, professor of hematology and oncology at the David Geffen School of Medicine at UCLA, and a member of the Parker Institute for Cancer Immunotherapy.
JOURNAL
The study is published online in the Cell. It is the first full report clinical trial to be published in the journal.
FUNDING
Funding was provided by Amgen and Merck.
DISCLOSURES
Ribas has received consulting fees from Amgen and Merck.
VIDEO ABSTRACT
A video abstract of the study is available for media use. YouTube link: https://youtu.be/pm46mQ7SeXU. For a broadcast-quality version, please contact Peter Bracke at [email protected].
***
UCLA's Jonsson Comprehensive Cancer Center has more than 500 researchers and clinicians engaged in cancer research, prevention, detection, control, treatment and education. One of the nation's largest comprehensive cancer centers, the Jonsson Comprehensive Cancer Center is dedicated to promoting research and translating basic science into leading-edge clinical studies.