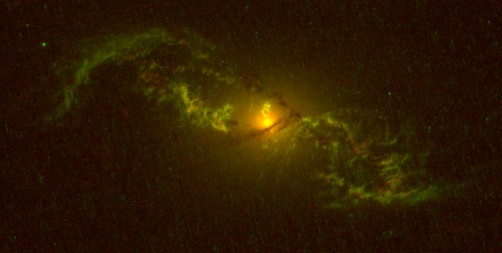 This image of the active galaxy NGC 5972 was produced from data acquired by Keel's team using the NASA/ESA Hubble Space Telescope. It combines filtered exposures with the telescope's Advanced Camera for Surveys and Wide Field Camera 3. Red and green represent radiation from ionized hydrogen and oxygen atoms, respectively. This is one of the nearest galaxies included in the team's program on giant gas clouds illuminated by fading events around massive black holes, and it shows intricate details in the surrounding gas clouds.

This back story to the research venture, along with other science- and science-fiction related stories, games, puzzles and more, will be highlighted in an online webcomic to be unveiled Sunday, Sept. 2. The material will be released during DragonCon, an annual Atlanta event dubbed the world’s largest fantasy-science fiction convention.

“This sort of involvement does for the intellect what people’s involvement in sports does for self-esteem and fitness,” said Dr. William Keel, professor of astronomy at The University of Alabama, and a collaborator on the online book with a working title of “Monster Clouds Around Active Galaxies.”

Scientists reaching out through atypical means to involve the general public can be helpful to science and result in a more scientifically-literate public, Keel said.Dr. Pamela Gay, an assistant research professor at Southern Illinois University, is the book’s editor.

In 2010, Gay, Keel and others collaborated on an astronomy-based comic book through a grant from the Space Telescope Science Institute. That 2010 comic book detailed one of the strangest space objects ever seen, a glowing, green glob of gas that came to be known as Hanny’s Voorwerp. A Hubble study led by Keel indicated the unusual sight was the afterglow from a quasar near a galaxy.

That unusual find, which was initially spotted by a Dutch school teacher combing through space photographs at galaxyzoo.org, sparked much attention and resulted in this latest project, where astronomers asked for the public’s help in evaluating other space oddities via the website.

In the new project, telescopic images of approximately 18,000 galaxies appearing to create black holes were posted. Volunteers were asked to review the images and vote “yes,” “no,” or “maybe” as to whether the images also contained oddly colored clouds worthy of additional exploration by astronomers.

“We wanted each one to be looked at, at least 10 times,” Keel said. “Inside of six weeks, all of them had been looked at 11 or 12 times. Seven people did them all.”

Of the 18,000, 50 were selected, based on the public’s feedback, for a closer look. Measurements with large telescopes in Arizona and California confirmed 19 of these galaxies hosting glowing clouds of gas that extended more than 30,000 light-years from the galaxy cores.

Of these, Keel’s team was awarded time to use the Hubble Space Telescope to observe seven. The team has completed observations of five of them, and it will use Hubble to peer at one in October and the final one in December.

“We were particularly interested in the cases of black holes actively turning off.”

The volume of images available – the survey has collected millions over the last 12 years – makes it impossible for scientists to review them all. And software, Keel said, still falls behind human perception in identifying certain kinds of subtle patterns. These are primary reasons why the researchers decided to start the website to seek the public’s assistance.

Launched in July 2007, galaxyzoo.org provides an opportunity for anyone with an Internet connection to assist researchers by participating in projects highlighted by Galaxy Zoo operators. Leading the effort are researchers at Oxford University and Portsmouth University in the UK, Chicago’s Adler Planetarium and Johns Hopkins University.

Since its launch, more than 300,000 people, from all walks of life, have logged onto galaxyzoo.org and, following completion of an online tutorial, made more than 60 million classifications of astronomical objects photographed by the Sloan Digital Sky Survey.Keel says people from home-school teenagers to retirees, and from various countries, including the U.S., Canada, the U.K., France, Germany and Belgium, have participated in the project that he’s been part of since a few weeks after its inception.

Professional computer-game designers are involved in the upcoming webcomic. They developed role-playing science games which will be unveiled as part of the online package, and science-fiction writers earlier participated in a writer slam event, churning out stories for the site.

Unusual space objects sometimes prove scientifically important and, other times, not so much, the UA astronomer said. They must be closely reviewed, of course, to make a determination.

“An object is either a Rosetta Stone or a pet rock,” Keel said.