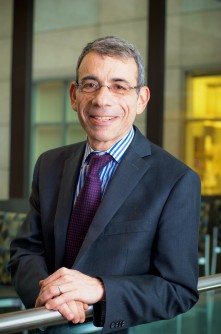 Newswise — SAN ANTONIO— In a nationwide study of women with “triple-negative” breast cancer, adding the chemotherapy drug carboplatin or the angiogenesis inhibitor Avastin to standard chemotherapy drugs brought a sharp increase in the number of patients whose tumors shrank away completely, investigators will report at the 2013 San Antonio Breast Cancer Symposium. The results are especially promising in the case of carboplatin, study leaders say, as Avastin has shown little effectiveness as a long-term preventer of cancer recurrence. The study is scheduled to be presented Friday, December 13, at 9:30 a.m., CT. “Our findings suggest that carboplatin could be used either in addition to or instead of some of the drugs in the standard chemotherapy regimen for women with triple-negative breast cancer,” says the study’s senior author, Eric Winer, MD, chief of the division of Women’s Cancers in the Susan F. Smith Center for Women’s Cancers at Dana-Farber Cancer Institute. Triple-negative breast cancer, named for the lack of three growth-spurring receptors on its cells’ surface, accounts for 15 to 25 percent of all breast cancer cases. Although it often goes into remission in response to chemotherapy, it can be more aggressive and more likely to recur than other breast cancers. Because of the dearth of three common receptors on the cell surface, triple-negative cancers usually aren’t vulnerable to drugs that block these receptors in other types of breast cancer. The current study involved 450 women with stage II or III triple-negative breast cancer. It was sponsored by the Cancer and Leukemia Group B, which is part of the Alliance for Clinical Trials in Oncology, a national clinical research network supported by the National Cancer Institute. As a pre-surgery treatment, the women were randomly assigned to receive either standard chemotherapy (a combination of paclitaxel, adriamycin, and cyclophosphamide), standard chemotherapy plus carboplatin, standard chemotherapy plus Avastin (a drug that blocks cancers from generating blood vessels), or standard chemotherapy plus both carboplatin and Avastin. Among patients who received standard chemotherapy alone, 34 percent had their tumors disappear. That compares with 48 percent of patients in the chemotherapy plus carboplatin group, 51 percent those in the chemotherapy plus Avastin group, and 61 percent of those in the chemotherapy plus carboplatin and Avastin group. Promising as the results are, “more research is needed to determine which women with triple-negative breast cancer particularly benefit from added carboplatin and which do not,” says Winer. “As we learn more about triple-negative breast cancer, we’ll be better able to determine which set of drugs is most effective for individual patients. The lead author of the study is William Sikov, MD, of Brown University. Co-authors are Donald Berry, PhD, of University of Texas M.D. Anderson Cancer Center; Charles Perou, PhD, and Lisa Carey, MD, of UNC Lineberger Comprehensive Cancer Center, Chapel Hill, N.C.; Baljit Singh, MBBS, MD, of New York University Medical Center; Constance Cirrincione, MD, Alliance Statistical Center, Durham, N.C.; Sara Tolaney, MD, MPH, Mehra Golshan, MD, and Jennifer Bellon, MD, of Dana-Farber; Charles Kuzma, MD, of Southeast Cancer Control Consortium, Winston-Salem, N.C.; Tim Pluard, MD, of Washington University-St. Louis Medical Center; George Somlo, MD, of City of Hope Comprehensive Cancer Center; Elisa Port, MD, of Mount Sinai Medical Center, New York, N.Y.; Deborah Collyar of Patient Advocates in Research, Danville, Calif.; Olwen Hahn, MD, of University of Chicago Medical Center; and Clifford Hudis, MD, of Memorial Sloan-Kettering Cancer Center.

Dana-Farber Cancer Institute is a principal teaching affiliate of the Harvard Medical School and is among the leading cancer research and care centers in the United States. It is a founding member of the Dana-Farber/Harvard Cancer Center, designated a comprehensive cancer center by the National Cancer Institute. It provides adult cancer care with Brigham and Women’s Hospital as Dana-Farber/Brigham and Women’s Cancer Center and it provides pediatric care with Boston Children’s Hospital as Dana-Farber/Boston Children’s Cancer and Blood Disorders Center. Dana-Farber is the top ranked cancer center in New England and fifth nationally, according to U.S. News & World Report, and one of the largest recipients among independent hospitals of National Cancer Institute and National Institutes of Health grant funding.

About Alliance for Clinical Trials in Oncology

The Alliance for Clinical Trials in Oncology is a national clinical trials network supported by the National Cancer Institute that consists of nearly 10,000 cancer specialists at hospitals, medical centers, and community clinics across the United States and Canada. The Alliance is dedicated to developing and conducting clinical trials with promising new cancer therapies, and utilizes the best science to develop optimal treatment and prevention strategies for cancer, as well as researching methods to alleviate side effects of cancer and cancer treatments. To learn more about the Alliance, visit our website at www.allianceforclinicaltrialsinoncology.org.