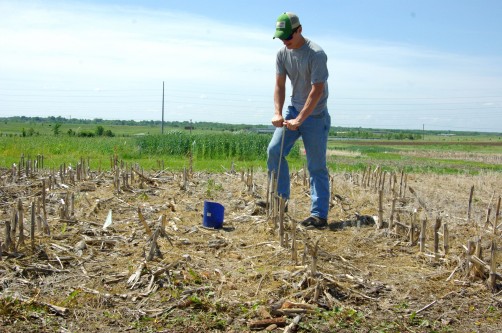 Lead researcher Lance Conway conducts a soil test on one of the research plots used in the study he authored on claypan soils. 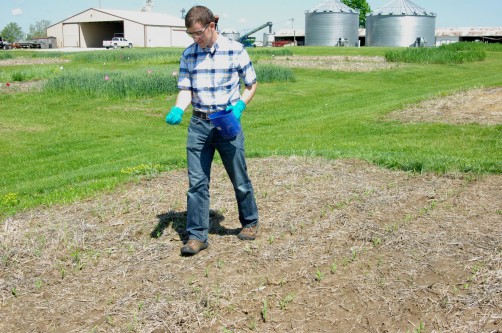 Researcher applies fertilizer on one of the plots used in the study. 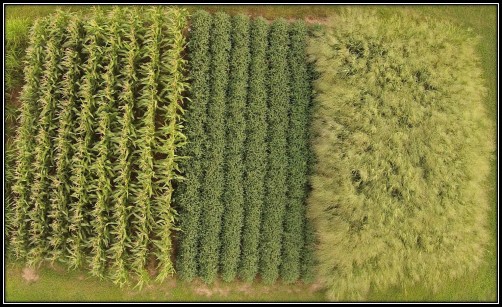 A drone image shows an aerial view of an experimental plot planted with, from left, corn, soybeans and switchgrass.

Newswise — All soils are not equal. Rich loams support the world’s most productive agricultural regions, including swaths of the American Midwest. But in some parts of the Midwest, including areas in Missouri and Illinois, claypan soils dominate. And where claypans reign, problems for producers abound. New research from the University of Missouri could help claypan farmers improve yields while saving costs.

Claypans have a clay-rich layer beneath a layer of loose topsoil. This clay layer poses challenges for producers, according to Lance Conway of the University of Missouri Department of Plant Sciences. Conway studies productivity in claypans.

“Claypans are really interesting and pose some unique problems,” Conway said. Those problems include erodibility. Claypans can easily erode even on fields with little slope. That’s because water does not flow quickly through the clay layer, which can then lead to surface runoff. Springtime erosion is often exaggerated after fresh tilling in the fields. But claypan soils often require this tilling to prevent the field from being too wet for planting.

“Because claypans don’t drain very well, they stay wet and cold in the spring,” Conway said. “On the flipside, in the summer they dry out really easily. Then you get drought issues. You can easily get both extremes in one growing season.”

Another challenge with claypans is nutrient management. Nitrogen loss is the main problem, Conway said. When the cold, waterlogged soils warm up in the spring, nitrogen loss as a gas is inevitable.

Conway wanted to know if there were other aspects of farming claypans that could be optimized to improve yields and reduce nutrient losses. He and his research team saw an opportunity in understanding phosphorus and potassium dynamics in claypans. Like nitrogen, these two nutrients are vital for crop growth—but also likely to become runoff if there’s extra.

Conway devised an experiment where corn and soybeans were planted in rotations in small plots with claypans at various depths below the topsoil layer. Perennial switchgrass was also planted in some plots. The experiment began in 2009, when the plots were soil tested and fertilizer was first applied. Conway soil tested and fertilized again in 2015, and soil tested one final time in 2016. He wanted to understand long-term and short-term phosphorus and potassium dynamics with these three tests. The test numbers also pointed to claypan-specific recommendations.

Conway found that farmers of claypans likely need to apply less potassium than what is generally recommended. That’s because claypan soils are rich in native potassium. This is especially true in places where the clay layer gets closer to the surface. On the other hand, these areas with shallower claypans seem to require more phosphorus than those at greater depths. That’s because phosphorus becomes locked into the acidic clay layer.

For producers with access to technology that reveals topsoil depth, Conway’s recommendations can be followed precisely. But for all growers, farmers and gardeners alike, the general recommendations should hold true: shallower topsoils will require less potassium and more phosphorus—through more frequent and lower rate applications—than deeper topsoils.

“But each field is different,” Conway said. “It’s going to depend on previous management and how high soil test potassium is to begin with. In general we can get away with slightly less potassium fertilizer.”

Conway’s recommendations are based on a small plot experiment. They still need verifying in the field. He’s conducting a similar experiment on larger plots that also compares till versus no-till approaches to field management. He plans to eventually move the experiment to a large-scale field environment.

Read more about Conway’s research in Agronomy Journal. This research was funded by USDA-ARS and the USDA-NIFA South Central Region Sun Grant.