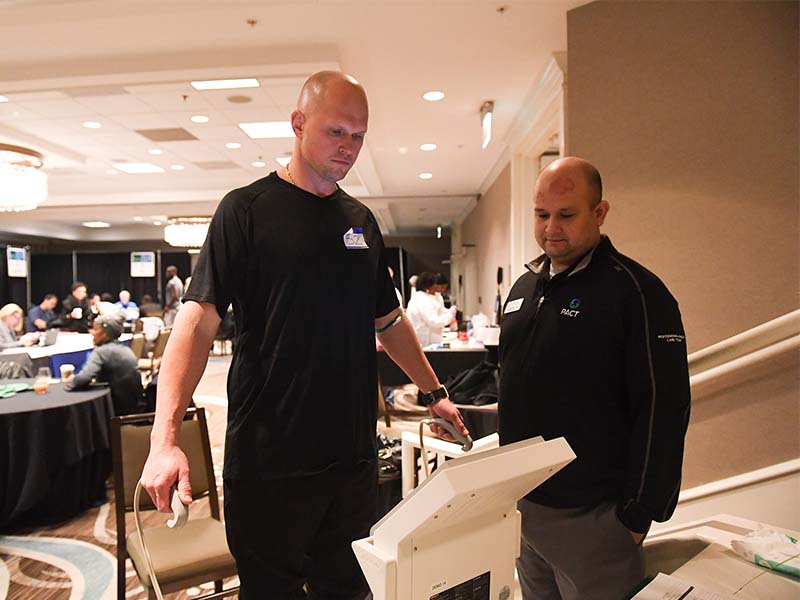 Former NFL player Steve Herndon (left) goes through a health assessment on the InBody under the supervision of PACT athletic trainer Scott Hebert (right) during a patient health screening at Super Bowl LIII in Atlanta.

Newswise — The New England Patriots weren't the only team to have a championship season last year. The Tulane University Professional Athlete Care Team (PACT) had its most successful year in 2018-19, as well, completing over 600 patient screenings, including a record 139 former players at Super Bowl LIII in Atlanta.

The national screening program is free and open to all former NFL players and includes a series of private and confidential cardiovascular and prostate screenings, as well as mental health resources and education. Spouses of former players are eligible for bloodwork.

In some cases, the tests have identified life-threatening medical conditions in players, including prostate and kidney cancer. Other urgent conditions, such as dangerously elevated blood pressure and blood sugar, have been identified as well. Some of these findings eventually led to lifesaving procedures, several of which were performed at the Tulane Medical Center.

Along with the extensive testing, the PACT team has raised the bar with their level of patient care to continue to provide the former players with the most comprehensive information possible and the best chance to succeed with their health.

“We have added a new piece of technology called the InBody because we need to be able to take a closer look at body measurements,” said Dr. Greg Stewart, W. Kennon McWilliams Professor in Sports Medicine at Tulane, who oversees all medical aspects of the NFL Player Care Foundation Healthy Body and Mind Screening program. “We can obtain a detailed analysis of body composition and then use that as we begin to look at things like cholesterol, hypertension, diabetes and the other items that we are already testing.”

The InBody is an advanced body composition analyzer that provides a detailed breakdown of weight in terms of muscle, fat and body water through weight measurement and the use of an eight-point tactile electrode and a patent thumb electrode.

“This new technology gives us almost a gold standard and allows us a chance to look at where their obesity is located within their body. It looks at the amount of skeletal muscle by extremity, total body fat in the torso and each of the extremities. We know abdominal fat is bad and that's what we look at from the standpoint of long-term metabolic problems,” said Stewart.

The group has also added another test with the use of specially-designed hand grips. While grabbing a pair of hand grips may sound easy, the results are very telling over time. A handgrip decline correlates with overall mortality and cardiovascular morbidity and has a predictive effect.

One of the many goals of the groups behind the screenings is to spread the word about the opportunity to other former players who either have not seen a physician recently or are unaware of the free screenings. The second point of emphasis is to have the players return every two to three years for testing to gauge their health path. Events such as the three-day record number of participants at Super Bowl LIII has led to many former players spreading the word about the PACT group and the importance of a free health screen.

“I think it's invaluable to have a guy like Dr. Stewart leading the program,” said Steve Largent, Pro Football Hall of Fame receiver for the Seattle Seahawks. “It's not just his knowledge, but his personality and spirit that he brings to Tulane and the students there, as well as to all the players that he's seeing. It's a genuine concern that he's interested in you. He and his team want to give you all the information, and that to me speaks volumes. Dr. Stewart is like my new best friend. He's a guy that you just really trust when you get to know him, and it doesn't take long to get to know Dr. Stewart. But when you do get to know him, you just have imminent trust in what he's saying and doing for you.”

“I walked into the screening at the Super Bowl and was incredibly impressed with the Tulane staff and their activity and attentiveness to the players. All the former players seemed to be comfortable, and it was all very well executed,” said Belinda Lerner, executive director for the NFL Player Care Foundation and vice president of NFL Alumni Affairs and Retired Player Programs.

Steady increases in the numbers of former players participating in the screenings, the success of PACT, which annually performs 10 screenings around the nation, and the fact Tulane is one of the top research universities in America, were all factors that contributed to the PCF selecting Tulane as one of its research universities.

“We had a relationship with Tulane prior to making them a formal research partner. We were familiar with the medical school and the quality and dedication of their care. Other organizations similar to ours and who share our commitment to former players, like the NFLPA Trust, already had a relationship. So, knowing their focus, which we thought was important, their knowledge of former player issues, personalities and having worked extensively with them, as well as being a stellar medical provider, it seemed like the perfect combination for us to bring them on board and make them our partner,” said Lerner.

Over the past four years, around 1,800 former players have participated in the screenings, and the group has collected a mountain of data to use for research purposes. What began as a cross-sectional study has become more longitudinal, and the research piece now allows the PACT medical group to answer some of those questions regarding how the health of these former players changes over time.

PACT had two abstracts accepted by the American College of Sports Medicine (ACSM) last year, and two at the American College of Cardiology (ACC) this year. Earlier this year, the ACC accepted a new, first-time study from Tulane that revealed how former NFL Legends, particularly those with larger body sizes, were found to have heart abnormalities specifically associated with high blood pressure.