These synthetic diamonds have produced nearly twice the pressure found at the center of the Earth.

5-Feb-2018 4:30 PM EST, by University of Alabama at Birmingham
favorite_border 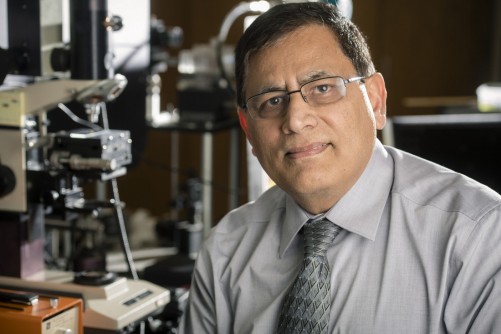 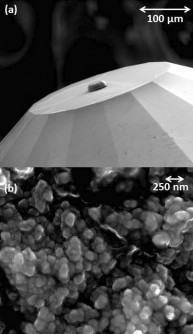 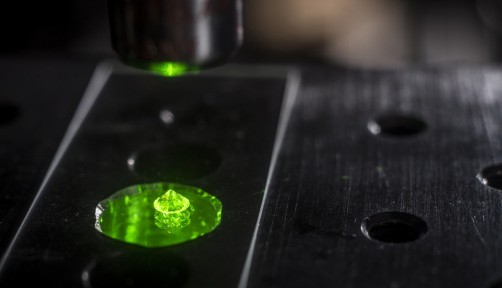 Newswise — BIRMINGHAM, Ala. – Using a nanocrystalline diamond built by plasma vapor deposition, Yogesh Vohra, Ph.D., has already produced a pressure nearly two times greater than that found at the center of the Earth.

Now he reports, in a study published in Scientific Reports, that the manufacturing process of these novel, nanocrystalline-diamond micro-anvils has proved to be “remarkably consistent” and demonstrates “a high level of reproducibility in fabrication.”

These results are encouraging for continued research to study materials under extreme conditions of pressure and temperature, says Vohra, a professor and university scholar of physics in the UAB College of Arts and Sciences at the University of Alabama at Birmingham.

The nanocrystalline diamond looks like a tiny nubbin of material grown on top of the flat culet surface of a one-third-carat gem diamond. To construct the nubbin, the gem diamond is coated with a tungsten thin film that has a 15- to 20-micrometer circle etched out at the center. The nanocrystalline diamond begins to grow as tiny diamond grains in that circle on top of the gem diamond surface. The grains form through vapor deposition from plasma made by heating methane, hydrogen and nitrogen gases

Plasma is a hot, ionized gaseous substance that is the fourth state of matter after liquids, solids and gasses. Grains of nanocrystalline diamond are typically between 5 and 100 nanometers in size.

Vohra and UAB colleagues looked at early-stage nucleation morphologies of the nanocrystals at one, three and 15 minutes after start of synthesis. They found that nucleation of nanocrystalline diamonds begins rapidly, and without need of pre-growth surface seeding with tiny specks of diamond. In contrast, such a seeding is required for diamond growth on some other surfaces.

After only one minute of growth, electron microscope images showed substantial nucleation sites on the surface of the single-crystal gem diamond anvil. At three minutes, only small areas of the gem surface lacked nanocrystalline diamond coverage, and by 15 minutes, there was complete and uniform coverage by nanocrystalline grains that begin to clump together over the entire growth region.

Growth slowed between three and six hours, and the nanocrystalline diamond tended to coalesce into a hemi-spherical structure. Vohra says this geometry has been observed consistently over every two-stage growth experiment the UAB researchers have performed. In addition, there seems to be a geometrical limit to the total dimensions of growth.

This immense pressure can potentially create as yet unknown new materials and are also utilized to study phase changes and compression behavior of materials. In the natural world, such immense forces deep underground can turn carbon into diamonds, or volcanic ash into slate.

The UAB team also examined nanocrystalline diamond micro-anvils that showed detachment during the compression and decompression in a diamond-anvil cell device. Using electron force microscopy, scanning electron microscopy and Raman spectroscopy, the researchers found that the detachment failure occurred in the bulk of the single-crystal gem diamond anvil below the culet surface, not at the interface between the gem diamond and the nanocrystalline diamond nubbin.

Vohra says UAB researchers will continue studies to manipulate grain size and the adhesive strength at the interface to optimize nanocrystalline diamond micro-anvils for high-pressure research.

Besides Vohra, authors of the paper “Rapid growth of nanocrystalline diamond on single crystal diamond for studies on materials under extreme conditions” are Samuel L. Moore, Gopi K. Samudrala and Shane A. Catledge, UAB Department of Physics. 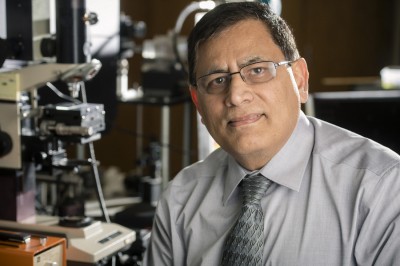 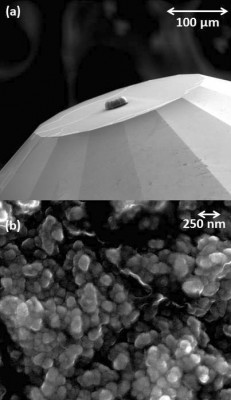 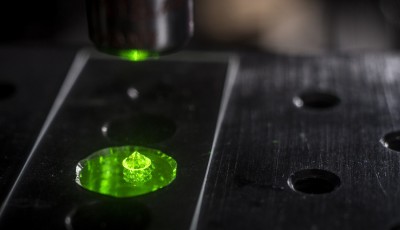