Advancing Access to Mental Health Care in the U.S. And Around the World 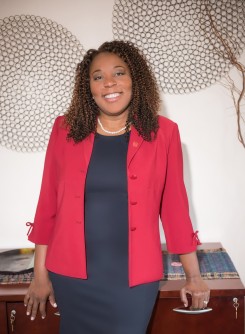 Francine Conway, dean of Rutgers' Graduate School of Applied and Professional Psychology, wants to disseminate the best evidence-based practices for psychotherapy and treatment inside and outside the U.S.

Newswise — As a child, Francine Conway often walked down dirt roads in Guyana to fetch water and wash clothes in a river.

Today, she is the first African-American dean of one of the world’s leading professional schools of psychology: the Graduate School of Applied and Professional Psychology (GSAPP) at Rutgers University-New Brunswick.

And she plans to expand the school’s reach, to assist areas inside and outside the U.S. that lack access to mental health care.

Before joining Rutgers in July 2016, she chaired the Psychology Program at Adelphi University’s Gordon F. Derner Institute of Advanced Psychological Studies in Garden City, New York. She earned a doctorate from the institute after graduating from Cornell University and Columbia University.

Conway’s research largely focuses on understanding the internal lives of children, including those with attention deficit hyperactivity disorder, bipolar disorders, chronic stressors and trauma impacts. Collaborating with experts in Germany and the U.K., she has won international recognition for work on the psychodynamic treatment of children with ADHD. Her new book, Cultivating Compassion: A Psychodynamic Understanding of Attention Deficit Hyperactivity Disorder, is aimed at practitioners but can help parents.

Now as GSAPP’s dean, she intends to make the school a more active resource for areas in need of better access to care, by disseminating the best evidence-based practices for psychotherapy and treatment.

This commitment began with Conway’s childhood in a nation that has one of the world’s highest suicide rates but no doctoral or master’s degree programs in psychology, and few mental health professionals.

“My grandmother took me and my cousins to the almshouses, where destitute folks lived, every week,” Conway said. “We brought food, said prayers, sang for them and did whatever we could to lift their spirits. That really got me interested in psychology, especially with a social justice bent.”

One of Conway’s plans is to develop a train-the-trainer model, to help make needed treatment more accessible to remote areas. GSAPP distinguished professor Terry Wilson, for example, is working with other universities to train people in India to provide targeted mental health interventions. Skype and mobile apps could also help provide treatment.

“We cannot physically treat the needs of everyone around the world, and we can’t produce enough psychologists to meet that need, but we can train other folks,” Conway said.

She also intends to develop a Rutgers-based, state-of-the-art integrated behavioral health program for the treatment of children. It would include primary care physicians, social workers, psychologists, nurses, nutritionists and other professionals to increase access to behavioral health care and hopefully serve as a model for such programs in the U.S.

Looking back at her origins in Guyana, Conway said, “Never in a million years did I think that I would be here. When you meet a child, you never know what that child will become, what they’re going to do and what they’ll accomplish, so we can’t write people off. Nurture them and give them every opportunity to be their best selves.”