Newswise — UNIVERSITY PARK, Pa. — Xin Ning, assistant professor of aerospace engineering at Penn State, is applying the ancient folding art of origami to reconfigurable, multifunctional materials that could be used to build structures in harsh environments, such as outer space. His work was recently recognized by the Applied Mechanics Division of the American Society of Mechanical Engineers (ASME).

The division awarded Ning a Haythornthwaite Foundation Research Initiation Award, which provides one year of seed funding to continue pursuing his project. Ning will receive the award at the ASME’s annual International Mechanical Engineering Congress and Exposition on Nov. 12 in Salt Lake City, Utah.

“I’m very excited that the potential of this work is being recognized by the ASME Applied Mechanics Division,” Ning said. “I’m just starting my second year as an assistant professor at Penn State, and this recognition helps me feel like I’m on the right track with my current research.”

Ning studies how to make electronics as thin and flexible as possible. As a post-doctoral research associate, he worked in the laboratory of John A. Rogers, the Louis Simpson and Kimberly Querrey Professor of Materials Science and Engineering, Biomedical Engineering and Neurological Surgery at Northwestern University. There, Ning developed electronic devices with the aim of improving human health monitoring and medical care.

“It’s different, to go from human bodies to outer space, but the underlying principles are similar,” Ning said. “Ultimately, the electronics need to be super thin, highly flexible and able to constantly monitor and adjust to external stressors. This project is just taking it to a much larger scale.”

In his current research, Ning works to develop electronics that can be folded for their journey to space and then assembled into a larger structure once in orbit.

“You can’t put a full structure into a rocket and launch it,” Ning said. “There’s not enough room for large structures. With this work, we can fold up the components, reducing the space they occupy, making it easier to transport them to space.”

Ning has already made a few small and simple structures out of foldable electronics. He is now working on scaling up the work, as well as adding sensors to the modules to monitor such things as temperature, humidity, radiation and more.

“There are a lot of stressors in space that could negatively impact the electronics and larger components of these structures,” Ning said. “Of course, we want to make them as flexible as possible for travel, but they also need to be strong enough to resist degradation that could result from any of these stressors.”

Ning will present his progress at the 2020 International Mechanical Engineering Congress and Exposition meeting.

“It’s nice to be recognized by my field, and I hope this year’s work will lay the foundation for more funding,” Ning said.

Ning’s research involves both graduate and undergraduate researchers. In addition to his research activities in foldable and deployable structures, Ning developed and teaches a combined senior- and graduate-level course: AERSP 497/597 Deployable Structures.

“With the integrated research and educational approach, I hope to educate the next-generation aerospace engineers who can push the boundaries of future large-scale space structures,” Ning said.

The Robert M. and Mary Haythornthwaite Foundation supports scientific research, primarily research in the field of theoretical and applied mechanics. Robert Haythornthwaite was the founder and first president of the American Academy of Mechanics. 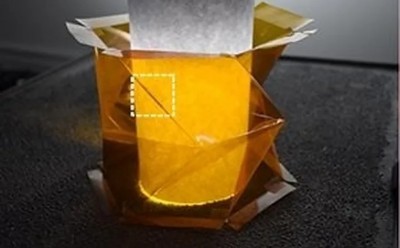 Caption: Xin Ning, an assistant professor in the Department of Aerospace Engineering, develops foldable and deployable structures, such as the cylindrical structure (left), with multifunctional electronics as a functional skin (zoomed-in view on the right) 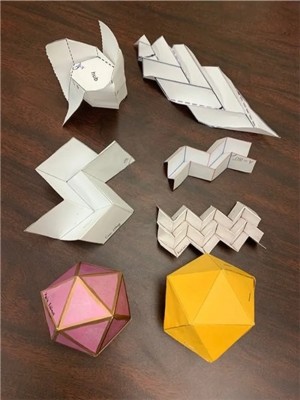 Caption: Students in Xin Ning’s course made origami models to represent potential foldable structures to be deployed in space.