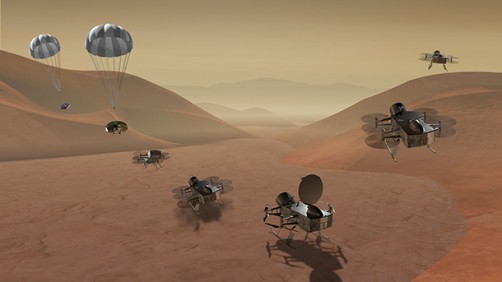 The Dragonfly dual-quadcopter, shown here in an artist’s rendering, would land on Saturn’s moon, Titan, and then make multiple flights to explore diverse locations as it characterizes the habitability of the ocean world’s environment. Dragonfly was chosen as a finalist for NASA’s New Frontiers program.

Newswise — UNIVERSITY PARK, Pa. — Researchers from the Penn State Department of Aerospace Engineering are part of a team led by the Johns Hopkins Applied Physics Laboratory (APL) whose proposal for a revolutionary rotorcraft to investigate Saturn’s largest moon, Titan, has been selected by NASA as one of two finalists for the agency’s next New Frontiers mission.

“We are tremendously excited and proud to be a part of the Dragonfly team,” said Langelaan. “Titan’s environment is ideal for flying, and the mobility of a flight vehicle will give planetary scientists access to a broad area of Titan, letting us see variations in geology, surface and subsurface geochemistry and atmospheric conditions.”

The Penn State team has already built a half-scale engineering test vehicle and has conducted several flight tests. This vehicle is designed to be easily reconfigurable and will be used to develop and test flight control algorithms and examine the effects of vehicle design changes on flight performance.

Dragonfly’s dual quadcopter (four pairs of stacked rotors) configuration provides excellent control of the vehicle, as well as redundancy—the vehicle can fly even if some rotors fail. Since solar power is unavailable because of Titan’s distance from the sun and its dense, hazy atmosphere, Dragonfly would use a Multi-Mission Radioisotope Thermoelectric Generator (MMRTG), like the Curiosity rover on Mars, to power its systems. The MMRTG would recharge a flight battery during Titan’s night, and allow Dragonfly to fly tens of miles on each charge.

“We’re using technologies developed for drones that fly here on Earth and modifying them so we can enable science missions on different planets. That’s about as cool as it gets!” said Langelaan. “We are also using computational techniques that are being developed to help design wind turbine farms to model Titan’s atmosphere: this will help us develop and test the flight control systems. And we are also developing and testing methods to protect the vehicle from Titan’s cold environment.”

The two mission finalists—the APL-led Dragonfly, and the Comet Astrobiology Exploration Sample Return (CAESAR) led by Cornell University and NASA Goddard Space Flight Center—will receive funding in 2018 to further develop and mature their concepts. NASA plans to select one of these investigations in the spring of 2019 to continue on to subsequent mission phases.

If selected, Dragonfly would have a planned mission launch in the mid-2020s with a target landing in 2034. The mission on Titan would last more than two and a half years.

The selected mission will be the fourth in NASA’s New Frontiers portfolio, a series of principal investigator-led planetary science investigations that fall under a development cost cap of approximately $850 million.