After One Dose of Gene Therapy, Hemophilia B Patients Maintain Near-Normal Levels of Clotting Factor 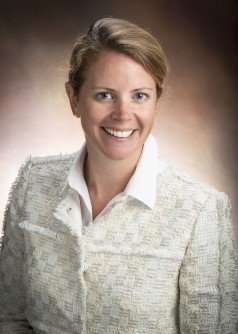 Lindsey A. George, MD, is a hematologist at Children's Hospital of Philadelphia

Newswise — San Diego, Dec. 3, 2016 – Researchers are reporting the highest and most sustained levels to date of an essential blood-clotting factor IX in patients with the inherited bleeding disorder hemophilia B. After receiving a single dose of an experimental gene therapy in a clinical trial, patients with hemophilia produced near-normal levels of clotting factor IX, allowing them to stop clotting factor infusions and to pursue normal activities of daily life without disabling bleeding episodes.

Lindsey A. George, MD, a hematologist at Children’s Hospital of Philadelphia (CHOP) is the lead investigator of the phase 1/2 clinical trial sponsored by Spark Therapeutics, Inc. and Pfizer, Inc. The American Society of Hematology (ASH) today highlighted updated findings from that trial in a press conference during its annual meeting in San Diego. George will present those study results tomorrow at an ASH plenary scientific session.

Katherine High, MD, a senior author of the study and Spark Therapeutics’s president and chief scientific officer, described the updated interim trial data at today’s press conference. The clinical trial of nine adult hemophilia B patients, aged 18 to 52 years, used a single dose of a gene therapy product engineered to enter patients’ liver cells and direct the production of the blood clotting factor that they lack.

George notes, “Our goal in this trial was to evaluate the safety of the gene therapy product and secondarily, to determine if we could achieve levels of factor IX that could decrease bleeding events in patients.” She added, “These patients have a severe or moderate level of hemophilia, with baseline clotting factor level less than or equal to 2 percent of levels in healthy people. In current treatment, patients with hemophilia give themselves intravenous doses of factor IX up to a couple times a week. While generally effective, factor levels fluctuate, and patients may suffer painful, disabling joint bleeds when their clotting factor levels drop. Such a regimen requires significant planning of daily activities.”

In the current trial, said George, the patients maintained factor levels of approximately 30 percent, enough to lift them out of the severe category. “At these new levels, hemophilia patients do not typically need to self-treat with factor to avoid bleeding events,” she said, adding, “This represents a potential dramatic improvement in their quality of life and a shift in the way we think about treating hemophilia.” A factor level of 30 percent is near-normal, she added, and patients would be expected to experience bleeding only in the event of major trauma or surgery.

One subject self-infused two days after receiving the gene therapy vector. Beyond this, no patients had any bleeding events or required factor for any reason. With significant reduction in bleeding events and factor use, six of the first seven patients reported increased physical activity and all reported improved quality of life. Two additional patients received the gene therapy product too recently to determine quality-of-life measures.

George reported that she is cautiously optimistic, acknowledging that this trial is a small study, with a short follow-up period as yet. However, as the researchers continue to monitor patients in the current trial, next steps will be to discuss with the U.S. Food and Drug Administration the outlines of a larger, phase 3 clinical trial. No gene therapies for any genetic diseases have yet been approved for clinical use in the U.S.

Formerly a research leader at CHOP, High pursued groundbreaking preclinical investigations in hemophilia B gene therapy and provided scientific expertise to previous gene therapy trials in hemophilia and other genetic disorders at CHOP before moving to Spark Therapeutics, which was spun off from CHOP in 2013. CHOP maintains a financial interest in the company.

About Children’s Hospital of Philadelphia: Children’s Hospital of Philadelphia was founded in 1855 as the nation’s first pediatric hospital. Through its long-standing commitment to providing exceptional patient care, training new generations of pediatric healthcare professionals, and pioneering major research initiatives, Children’s Hospital has fostered many discoveries that have benefited children worldwide. Its pediatric research program is among the largest in the country. In addition, its unique family-centered care and public service programs have brought the 535-bed hospital recognition as a leading advocate for children and adolescents. For more information, visit http://www.chop.edu