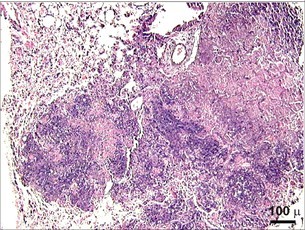 Newswise — A toxic gas present in air pollution and tobacco smoke plays a significant role in triggering tuberculosis infection, according to a new study from researchers at the University of Alabama at Birmingham (UAB).

The study showed that CO triggers Mycobacterium tuberculosis (Mtb), the causative agent of tuberculosis, to shift from active infection to a drug-resistant dormant state. This is called latency, a global problem that results in tuberculosis escaping detection and treatment, and which contributes to overall tuberculosis transmission.

"This is the first description of a role for CO in mycobacterial pathogenesis, and may explain why smoking and air pollution contributes to TB," said Adrie Steyn, Ph.D., assistant professor in UAB's Department of Microbiology and lead author on the study.

The findings were published online in The Journal of Biological Chemistry.In the study, the researchers worked with Mtb cells under biosafe laboratory conditions and found Mtb proteins 'sense' CO at the molecular level, much like the bacteria's proteins sense other gases in the lungs. The CO interaction is what led to a series of biological steps that sent Mtb into latency.

The finding holds political and social implications for speeding up clean-air measures as a way to improve public health, in addition to the environmental significance. The study holds promise for helping to discover new ways to fight extreme drug-resistant tuberculosis, or XDR TB, the UAB researchers said.

"We're talking about huge socio-economic and public health implications," said Steyn. One third of the world's population is infected with undetectable forms of tuberculosis, which hinders screening and eradication efforts.

The finding adds to a growing understanding that exposure to high levels of CO through air pollution and cigarette smoke plays a role in tuberculosis infection rates. Also, the study showed that low levels of CO present in the body are capable of triggering tuberculosis latency, Steyn said. Inflammation, infection and oxidative stress are among contributors to CO in the body.

Research published by Steyn in 2007 showed that combined production of CO, oxygen and nitric oxide should be used in future models of Mtb persistence.Tuberculosis is the leading cause of death in the world from a single bacterial infection, and it kills 1.5 million people per year. The rate of infection in Alabama is slightly lower than the United States. Tuberculosis infection rate: 4.3 (Alabama) per 100,000 people compared to 4.6 (U.S.) per 100,000 people.