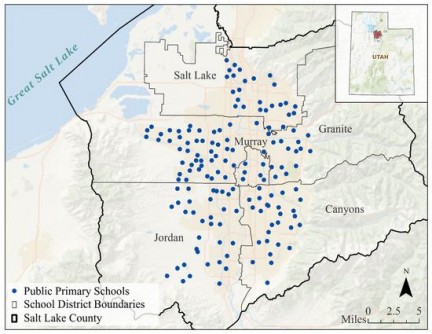 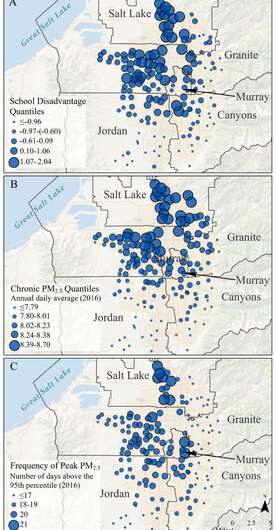 Fine particulate matter (PM2.5), the tiny particles responsible for hazy air pollution, are detrimental to children’s health even inside the classroom. Mounting evidence has linked chronic exposure with poor academic performance in K-12 students. Until now, no research had examined the impact of “peak” air pollution events, the 24-hour spikes of extremely high PM2.5 levels. For students in Salt Lake County, Utah, these episodes are a dangerous reality—the county’s largest city, Salt Lake City, was among the top 10 most polluted American cities for short-term particle pollution in the latest American Lung Association report.

In a new study, University of Utah researchers found that more frequent peak air pollution exposure was associated with reduced math and English language arts (ELA) test scores for third graders in all primary public schools in Salt Lake County during the 2016-2017 year. The minimum peak pollution levels in this study are below what the U.S. Environmental Protection Agency (EPA) determines are “safe” levels of PM2.5. The results stress the need for legislators to enact policies that reduce the number of peak pollution days, and to advocate for lower federal pollution standards.

“The huge takeaway is that this isn’t about school location—it’s not just the schools in the most polluted parts of the city. Everyone is impacted by peak pollution,” said lead author Casey Mullen, doctoral student in sociology at the University of Utah.

The study highlights the environmental injustice of Salt Lake County’s air pollution problem— schools with a higher proportion of students of color and from households experiencing poverty were exposed to higher mean concentrations of fine particulates and more peak pollution days than were schools serving middle- to upper- class and predominately white students. Though peak exposures had a stronger effect on lower math proficiency in more socially advantaged schools.

“There are so many studies showing us that air pollution damages our brain’s cognitive processing ability,” said co-author Sara Grineski, professor of sociology at the University of Utah. “Utah has made great strides to lower pollution in the past decades, but we need to keep pushing forward policies to reduce pollution. We already know it will improve Utahns respiratory health, but it also can help kids do a little bit better in schools.”

The paper published online on Sept. 22, 2020, in the International Journal of Environmental Research and Public Health. This research was funded by the Interdisciplinary Exchange for Utah Science at the University of Utah.

The researchers looked at the Student Assessment of Growth and Excellence (SAGE) math and ELA scores of third graders in 156 primary public schools in Salt Lake County in 2017. They focused on the percentage of students whose scores were lower than grade-level expectations.

In order to ensure that air pollution was the only variable affecting test scores, the researchers created a school disadvantage variable that took into account Title I school status; Hispanic students; the percentage of non-Hispanic minority students who were Black, Asian/Pacific Islander or Native American/Alaska Native; and the percentage of students on free and/or reduce-priced meals. They also accounted for the school’s neighborhood context.

“It is important to account for social disadvantage since social factors are tightly linked with standardized test scores. Students from low-income families have additional struggles that don’t tend to affect more affluent students, such as food insecurity. Students from racial/ethnic minority backgrounds often have unequal educational experiences in the U.S. In some cases, they are immigrants themselves or the children of immigrants, and they might still be learning English,” said Grineski. “These factors influence standardized test scores.”

While chronic pollution exposure was associated with lower test scores, the effect disappeared when researchers controlled for the social disadvantage factors. In contrast, the frequency of peak pollution exposure was associated with a higher percentage of students who tested below grade proficiency in math and ELA, even after controlling for social disadvantage.

The authors suggest that legislators could advance public health initiatives that protect children’s exposure to air pollution. The researchers have consulted with urban planners about creating cleaner air routes for children to move around their communities. For the future, the state could improve regulations that would prevent schools from being built in high pollution areas. For now, investing in better air filtration systems in classrooms could help mitigate the poor air quality already exists. In the face of growing evidence that even low PM2.5 concentrations does damage to the human body, legislators should advocate for lower federal air pollution standards.

“Here, with constant air quality issues throughout the seasons, we need to increase awareness about air pollution exposures,” Mullen said. “This is a conversation everyone should be having—people need to be informed about what’s at stake.”