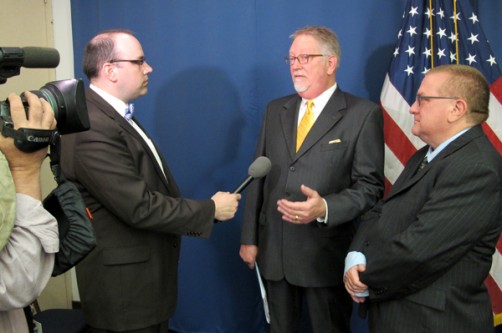 Dean Headley (center) and Brent Bowen (right), co-authors of the Airline Quality Rating, will reveal the results for 2014 airline performance on Monday, April 13.

Newswise — The results of the 25th annual national Airline Quality Rating (AQR) will be announced at 9:30 a.m. EDT, Monday, April 13, at a news conference at the National Press Club, Zenger Room, in Washington, D.C.

As the longest-running and most established measure of airline performance and quality of the 12 largest airlines in the United States, the study helps sort out the difference in airline performance for the business community, the media and the general public. The rating is conducted annually by researchers Dean Headley at the W. Frank Barton School of Business at Wichita State University and Brent Bowen, dean of the College of Aviation at Embry-Riddle Aeronautical University’s Prescott, Ariz., campus.

AQR researchers use performance-based data to show whether actual performance of airlines correspond with the public perception of airline quality.

“Defining what airline passengers want, and more importantly, what they need, should be a top priority for airlines,” Headley said. “This report could reveal that things aren’t as they should be.”

A multifactor look at the overall performance quality of the airlines, the reseach-based report delves into elements such as on-time performance, denied boardings, mishandled baggage and customer complaints. The rating includes multiple criteria by which airline performance is measured in a quantitative and unbiased manner. “The timing of this report given recent aviation incidents couldn’t be more vital to provide accurate, verifiable information to the American traveling public,” said Bowen.“

Additional issues the researchers will speak to reporters about include: - How 2014 airline performance compares to 2013.- How on-time performance, involuntary denied boardings, mishandled bags and customer complaints have changed during the past year.- How airline performance has been affected by airline mergers.- How the airline industry has performed during the past two decades.- How key industry elements have changed since 1991.

Researchers also will address the impact new pilot training and qualification regulations are having on the industry.

For more information about the Airline Quality Rating, go to www.airlinequalityrating.com.# # # # #

For information about the AQR or to schedule interviews with the researchers, contact Joe Kleinsasser, director of news and media relations, Wichita State University, at 316-978-3013, cell 316-204-8266 or [email protected]; or Melanie Hanns, director of university communications, Embry-Riddle Aeronautical University, at 386-226-7538, cell 386-283-0753 or [email protected].