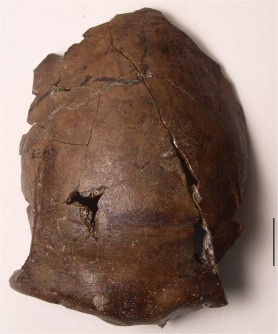 This photo shows the skull bone fragment found outside Aitape, Papua New Guinea, in 1929. The bone has been dated to be about 6,000 years old and likely belongs to the world's first known tsunami victim. 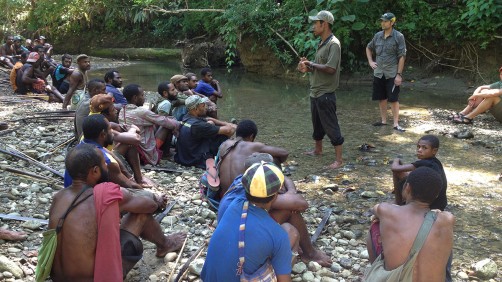 Jason Kariwiga, University of Papua New Guinea, (front) and Mark Golitko, assistant professor of anthropology at the University of Notre Dame, talk to some of the people from Aitape about their work. They're standing in a field at the location they drew their samples from for their study.

Newswise — In 1929, Australian geologist Paul Hossfeld stumbled upon a partial human skull in a mangrove outside the coastal town of Aitape in Papua New Guinea. Originally thought to belong to Homo erectus, the skull was subsequently dated to the mid-Holocene period, about 6,000 years ago. Now, new research suggests the bone fragment belongs to the world’s oldest known tsunami victim — an important piece in the conversation about how modern populations can adapt to rising sea levels.

Mark Golitko, assistant professor of anthropology at the University of Notre Dame, worked with colleagues from the Field Museum in Chicago and institutes in Australia, New Zealand and Papua New Guinea to study the Aitape skull and the area it was found in. In a new PLOS One paper published Wednesday (Oct. 25), the researchers lay out evidence showing that the skull was victim to a violent tsunami that struck the coast about 6,000 years ago.

Golitko and his research team went back to the place the skull was found, near a place Hossfeld called Paniri Creek, to analyze the soil and strata for clues about what killed this person.

“Hossfeld hadn’t really sampled anything; he just did a field description and took the skull out and that was it,” Golitko said. “What we were doing was actually going in and sampling the sediments to bring back for lab analysis that would tell us a lot more about the age and depositional history there.

“We don’t know exactly where Hossfeld found the skull, but I think we were within 100 meters of the original location based on his description. We were able to use modern scientific techniques to understand a little more about how this place formed and what we were actually looking at,” he said.

The team did lab tests on the sediment to look at grain size and its geochemistry. They found diatoms, small single-cell organisms that live in water and are sensitive environmental indicators, and used those to learn more about the water conditions at the time.

“Diatoms make little silica shells around themselves, and when they die, those sink to the bottom,” Golitko said. “So we put the sediment under a microscope and counted these diatoms, and it more or less tells you about the temperature, salinity and how energetic the water was that they were living in.

“These sediments that the Aitape skull was in have pure marine diatoms in them, which is ocean water that’s inundating it. It’s really high-energy ocean water — high-energy enough for these little tiny specks of silica that the diatoms build to be broken as they’re washing in.”

The high-energy water, Golitko said, combined with chemical signatures and specific sediment grain sizes all indicate the presence of a tsunami at the time the skull was buried. It’s possible that the skull was buried before and it was washed out as the tsunami came across, Golitko said, but based on observations of modern tsunamis, Golitko and his team don’t think that’s likely.

Golitko hopes this study can help start a conversation about how people adapt and thrive in these coastlands that are subject to tropical storms, earthquakes and tsunamis — the Aitape region has endured several tsunamis; the most recent in 1998 killed more than 2,000 people. People likely started moving from the mountains to the coastlines in this area around 6,000 years ago, Golitko said.

“What’s interesting is despite the fact that they’re now moving to this super risky environment, we see that people seem to have been living there more or less continuously from then on,” he said, “so they obviously come up with strategies for dealing with these risks, which could be very pertinent for thinking about what’s going to be happening in the next couple hundred years. It’s the next challenge to look at how people were living in that area and how they’re responding to these risks as they start to move into these environments.”

Golitko co-authored the paper, “Reassessing the environmental context of the Aitape Skull — the oldest tsunami victim in the world?” with James Goff and Darren Curnoe, University of New South Wales; Ethan Cochrane, University of Auckland; Shaun Williams, National Institute of Water and Atmospheric Research, New Zealand; and John Terrell, Field Museum of Natural History, Chicago. Their research was contributed to by the University of Papua New Guinea, the Papua New Guinea National Museum and Art Gallery and l’Université de Bourgogne-Franche-Comté. 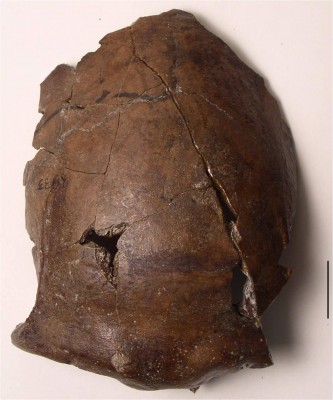 Caption: This photo shows the skull bone fragment found outside Aitape, Papua New Guinea, in 1929. The bone has been dated to be about 6,000 years old and likely belongs to the world's first known tsunami victim. 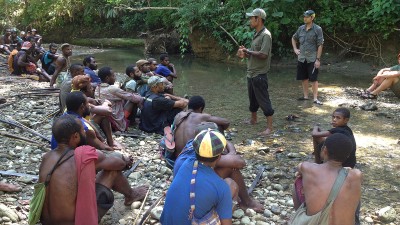 Caption: Jason Kariwiga, University of Papua New Guinea, (front) and Mark Golitko, assistant professor of anthropology at the University of Notre Dame, talk to some of the people from Aitape about their work. They're standing in a field at the location they drew their samples from for their study.