It took a harrowing diagnosis of aplastic anemia, two unsuccessful chemotherapy treatments, 50 blood transfusions, more than 25 platelet injections, almost three years and 4,650 miles before Talladega, Alabama native Jimmy Roberson could meet who he says is his angel here on Earth. Her name is Alina Franke, a 27-year-old Hamburg, Germany native who donated stem cells way back in 2009, all because she hoped to help someone in need one day. 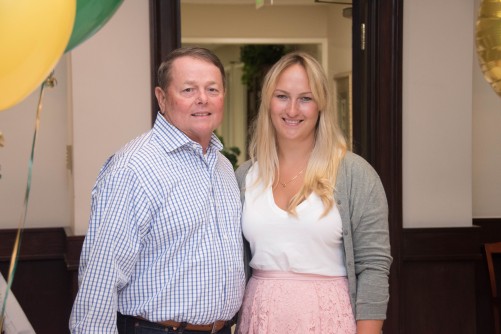 Alabama native Jimmy Roberson, left, desperately needed a bone marrow transplant, and help arrived in the form of a one in 24 million long shot. Alina Franke, right, who lives in Hamburg, Germany, was the only person on the Be A Match Registry to be the perfect match Roberson needed. 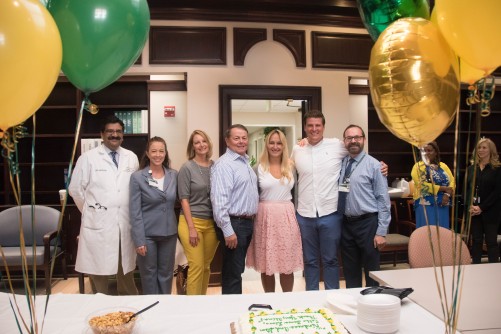 Previous Next
• See more UAB News at www.uab.edu/news
• The UAB News Studio is available for live or taped interviews with UAB experts.

Newswise — BIRMINGHAM, Ala. – It took a harrowing diagnosis of aplastic anemia, two unsuccessful chemotherapy treatments, 50 blood transfusions, more than 25 platelet injections, and almost three years and 4,650 miles before Talladega, Alabama, native Jimmy Roberson could meet who he says is his angel here on Earth. Her name is Alina Franke, a 27-year-old Hamburg, Germany, native who donated stem cells way back in 2009, all because she hoped to help someone in need one day.

That someone turned out to be Roberson, a former Talladega County commissioner and Chelsea City Council member. And this week, Franke and her boyfriend, Christoph Kleeberg, traveled from Germany to the United States to meet Roberson and his wife, Michele, for the first time. The meeting at the Birmingham International Airport was emotional for Roberson and Franke, who had previously communicated through email, but never spoken to one another.

“Neither one of us could talk at first,” Roberson said of the airport meeting. “We were hugging, and I don’t know if I was shaking and it was shaking her, but we both were shaking. And we were in silence for 30-45 seconds. I finally just told her that I wanted to thank her for saving my life, and that she’d always be my angel. Always.”

“It was an emotional experience, for sure,” Franke said. “I didn’t think I would ever meet my recipient. When I learned someone was going to benefit from my stem cells, I was just excited to learn someone was being helped.”

For Roberson, help arrived in the form of a one in 24 million long shot. That’s how many people his caregivers at the University of Alabama at Birmingham and the Be The Match Foundation had to go through to find what, or better yet, who Roberson needed — Franke, who was a perfect match.

“The clock was ticking on my life, and fortunately, my angel was found,” Roberson said. “I would not be here today without her kindness, her selflessness and her willingness to give of herself, all in the name of helping a total stranger — one who ultimately wound up being half a world away.”

Aplastic anemia develops when damage occurs to the bone marrow, slowing or shutting down the production of new blood cells. The condition is considered a very rare hematologic emergency, with fewer than 20,000 cases in the United States reported each year. The mortality rate can be greater than 70 percent, depending on a person’s response to available treatments.

UAB’s Comprehensive Cancer Center and the School of Medicine’s Blood and Bone Marrow Transplantation and Cellular Therapy Program team of physicians and nurses were vital to keeping Roberson alive long enough to receive the transplant at UAB Hospital, he says.

“Between my wife and the care team at UAB — I would never even have had the opportunity to be alive long enough to get the transplant, and even after the transplant when I had some really bad days when my body was trying to reject the bone marrow,” Roberson said. “My doctors, Antonio DiStasi, Racquel Innis-Shelton, Luciano Costa, Donna Salzman and many others, and then my nurses, Lea Freeman, Jay Smith, Tiffani Hill, Becky Howard, Melissa Sentell, Binita Parekh and so many others — everyone, literally everyone, in UAB’s bone marrow unit are family to me. I visit the unit even when I don’t even have an appointment and bring them doughnuts. I just love them and thank them for everything they did for me.”

After the transplant, Roberson spent 49 nights in the bone marrow unit, battling 103-105 degree fevers that had UAB nurses laying him on an ice mattress to try to get his fevers down. At one point, he had double pneumonia, and they told his wife that he was critical.

“But eventually, I started getting better. Then I started getting stronger, and the team that cared for me at the hospital was a big reason. Then I thought a lot about my donor and all he or she did to help me — I didn’t know who my donor was at the time. I was thinking about my wife and my grandchildren and how much I didn’t want to leave them. I felt like I had to keep fighting.”

After Roberson improved enough to go home and he continued to regain his strength, he hoped to one day meet his donor. Typically, recipients can ask the Be The Match Foundation to reach out to donors to see if they would be willing to connect one year after the transplant. But in Roberson’s case, he had to wait two years to comply with Germany’s rules on contact with donors.

When the Be The Match Foundation connected with Franke, she said she was willing to learn who the recipient of her bone marrow was. After the Robersons and Franke had written each other through email over several months, the Robersons offered to host Franke and Kleeberg any time they wanted to come to the United States.

Franke and Kleeberg have spent this week with the Robersons at their lake house in Ohatchee. They came to the UAB bone marrow unit so the Robersons could introduce their hero to the staff who cared for him. The Robersons have been introducing the couple to Southern food and the Southern lake lifestyle, riding up and down the lake on boats and jet skis. They’ve been learning more about each other. They’ve been living life to the fullest.

And they both hope sharing their story will encourage someone, somewhere to consider registering to be a bone marrow donor and, perhaps, being someone else’s one in 24 million chance at living their life healthy and free of a deadly disease.

“What I learned as a donor in this process is that it was not a big deal to donate stem cells at all,” Franke said. “It’s not invasive. There was no pain at all. It was very, very easy. I certainly hope others will consider doing the same.”

“It would be great if our story would bring in more participants to the Be The Match Foundation list,” Roberson said. “I was getting blood transfusions weekly in The Kirklin Clinic, and there were so many patients like me who just didn’t have a match. I’m not just talking about 50-year-olds. I’m talking about children, too. It breaks your heart when you see all of the young children and mothers and fathers still looking for a match, and they can’t get one. So, I would just say please be a member of the Be The Match Foundation. It’s no cost to the donor at all, and all you’re doing is saving the life of another human being.”

About UAB
Known for its innovative and interdisciplinary approach to education at both the graduate and undergraduate levels, UAB is an internationally renowned research university and academic medical center and the state of Alabama’s largest employer, with some 23,000 employees and an economic impact exceeding $5 billion annually on the state. The five pillars of UAB’s mission deliver knowledge that will change your world: the education of students, who are exposed to multidisciplinary learning and a new world of diversity; research, the creation of new knowledge; patient care, the outcome of ‘bench-to-bedside’ translational knowledge; service to the community at home and around the globe, from free clinics in local neighborhoods to the transformational experience of the arts; and the economic development of Birmingham and Alabama. Learn more at www.uab.edu.