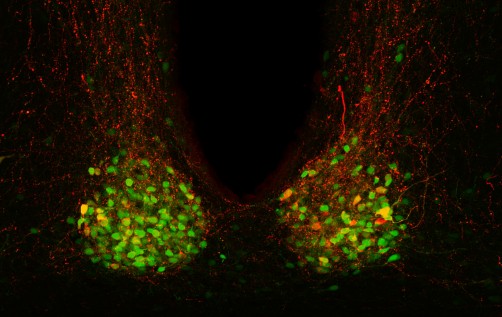 News media reproduction to illustrate this story permitted with proper attribution as provided above. For one time use only. 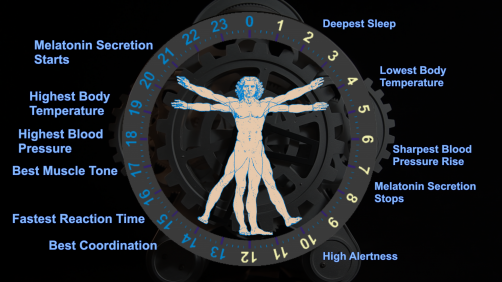 The circadian clock, depicting a person's regular physiological events during certain hours of the day. 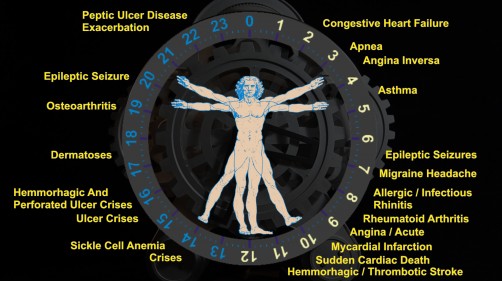 The circadian clock, illustrating the many diseases that manifest in a person during certain times of the day. 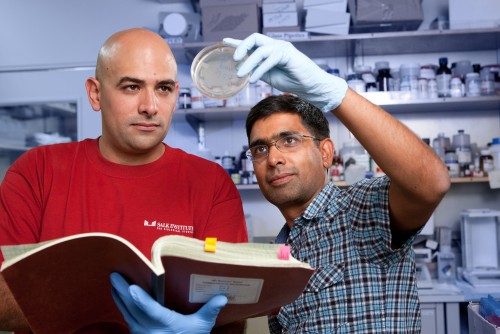 Salk scientists discover a critical component of the biological clock. Dr. Satchidananda Panda's laboratory has identified a gene that is required for the circadian clock genes to be turned on. Here Dr. Panda (right) and his postdoc and first author Dr. Luciano DiTacchio (left) examine a construct used in their studies.

Newswise — La Jolla----Ever wondered why you wake up in the morning ---- even when the alarm clock isn't making jarring noises? Wonder no more. Researchers at the Salk Institute for Biological Studies have identified a new component of the biological clock, a gene responsible for starting the clock from its restful state every morning. The biological clock ramps up our metabolism early each day, initiating important physiological functions that tell our bodies that it's time to rise and shine. Discovery of this new gene and the mechanism by which it starts the clock everyday may help explain the genetic underpinnings of sleeplessness, aging and chronic illnesses, such as cancer and diabetes, and could eventually lead to new therapies for these illnesses. "The body is essentially a collection of clocks," says Satchidananda Panda, an associate professor in Salk's Regulatory Biology Laboratory, who led the research along with Luciano DiTacchio, a post-doctoral research associate. "We roughly knew what mechanism told the clock to wind down at night, but we didn't know what activated us again in the morning. Now that we've found it, we can explore more deeply how our biological clocks malfunction as we get older and develop chronic illness." In a report published today in the journal Science, the Salk researchers and their collaborators at McGill University and Albert Einstein College of Medicine describe how the gene KDM5A encodes a protein, JARID1a, that serves as an activation switch in the biochemical circuit that maintains our circadian rhythm. The discovery fills in a missing link in the molecular mechanisms that control our daily wake-sleep cycle.The central player of our biological clock is a protein called PERIOD (PER). The number of PER proteins in each of our cells rises and falls every 24 hours. Our cells use the level of PER protein as an indicator of the time of the day and tell our body when to sleep or be awake. Scientists knew that two genes, CLOCK and BMAL1, served as the key drivers for raising PER protein levels. As the level of PER protein rises during the daytime, reaching its peak around evening, it somehow puts a break on CLOCK and BMAL, thereby reducing its own level during nighttime. Falling PER protein levels at night causes our biological systems to slow: our blood pressure drops, our heart rate slows and our mental processes wind down. But, until now, the precise nature of the nighttime brake and what let CLOCK and BMAL proteins overcome this brake to raise Per protein levels again each morning was a mystery. In their research, which was primarily funded by Salk's Innovation Fund, Panda and his colleagues identified JARID1a, a type of enzyme, as the molecular bugle call for cells and organs to get back to work each morning. By studying the genetic mechanisms underlying circadian rhythms in human and mouse cells and in fruit flies, the researchers discovered that JARID1a was required for normal cycling, both at the cellular level and in terms of an organisms' daily behavior. In human and mouse cells that were genetically modified to under-produce JARID1a, the PER protein did not rise to its normal peak each day. Fruit flies that were similarly genetically altered also had low levels of PER protein. The flies lost track of time: they did not know when to sleep or wake up and took frequent naps throughout the day and night. Digging deeper into the molecular workings of the clock, Panda and his colleagues found that each morning, JARID1a reactivates CLOCK and BMAL1 by countering the action of a brake protein HDAC1. They suspect PER protein tells HDAC1 to put a brake on its own production at night. "JARID1a tells that break to ease off, which causes CLOCK and BMAL1 drivers to rev back up every morning," Panda says. To support their findings about the clock's workings, the researchers studied genetically altered mouse cells and fruit flies that lacked the JARID1a gene. They inserted JARID1a into the flies' DNA, which released the HDAC brake so the flies returned to a normal cycle. They treated mouse cells with a drug that mimics JARID1a, which allowed their biological clocks to operate normally. Now that scientists understand why we wake each day, they can explore the role of JARID1a in sleep disorders and chronic diseases, possibly using it as a target for new drugs. With age, for instance, the biological clock seems to decline, often causing older people to suffer from difficulty sleeping. There is also strong evidence that shift workers, such as nurses and emergency personnel, who work long shifts that break them out of the normal 24-hour cycle of waking and sleeping, are at much higher risk for certain diseases. The biological clock also appears important to the development of disease, most likely due to its daily influence over metabolic cycles. Daily cell cycles are fundamental to normal operation of genetic mechanisms that control how cells grow and divide, both in normal development and in cancer. The cellular mechanisms of diabetes, another chronic disease, are also tied to metabolic cycles controlled by the biological clock. For instance, the conversion of sugars into fat, which normally occurs only at certain times of day, often seems to take place all day long in diabetics' bodies, suggesting the clock has lost control. "So much of what it means to be healthy and youthful comes down to a good night's sleep," Panda says. "Now that we have identified JARID1a in activating our daytime cycle, we have a whole new avenue to explore why some people's circadian rhythms are off and to perhaps find new ways to help them."

The Salk Institute for Biological Studies is one of the world's preeminent basic research institutions, where internationally renowned faculty probe fundamental life science questions in a unique, collaborative, and creative environment. Focused both on discovery and on mentoring future generations of researchers, Salk scientists make groundbreaking contributions to our understanding of cancer, aging, Alzheimer's, diabetes and infectious diseases by studying neuroscience, genetics, cell and plant biology, and related disciplines. 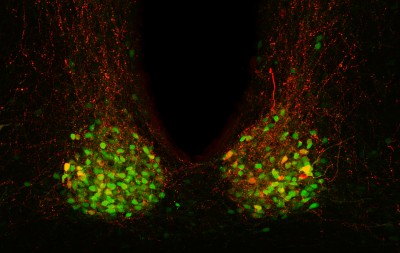 Caption: News media reproduction to illustrate this story permitted with proper attribution as provided above. For one time use only. 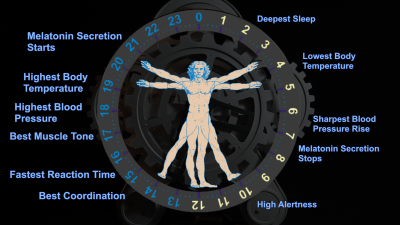 Caption: The circadian clock, depicting a person's regular physiological events during certain hours of the day. 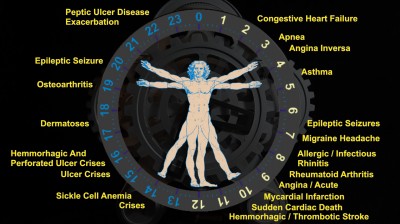 Caption: The circadian clock, illustrating the many diseases that manifest in a person during certain times of the day. 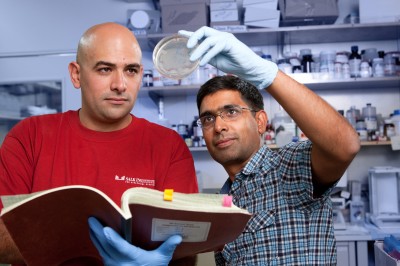 Caption: Salk scientists discover a critical component of the biological clock. Dr. Satchidananda Panda's laboratory has identified a gene that is required for the circadian clock genes to be turned on. Here Dr. Panda (right) and his postdoc and first author Dr. Luciano DiTacchio (left) examine a construct used in their studies.