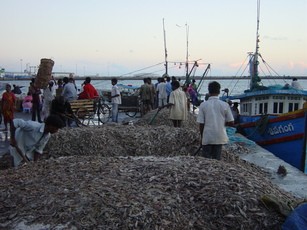 Newswise — An alarming new study to be published in November in the Annual Review of Environment and Resources finds that one-third of the world's marine fish catches are ground up and fed to farm-raised fish, pigs, and poultry, squandering a precious food resource for humans and disregarding the serious overfishing crisis in our oceans.

Lead author Dr. Jacqueline Alder, senior author Dr. Daniel Pauly, and colleagues urge that other foods be used to feed farmed animals so that these "forage fish" can be brought to market for larger-scale human consumption. "Forage fish" include anchovies, sardines, menhaden, and other small- to medium-sized fish species which are the primary food for ocean-dwelling marine mammals, seabirds (especially puffins and gulls) and several large fishes.

Currently, catches of forage fish are predominantly used in animal feed, but these species are highly nutritious and well-suited for direct human consumption.

"We need to stop using so many small ocean fish to feed farmed fish and other animals," Alder said. "These small, tasty fish could instead feed people. Society should demand that we stop wasting these fish on farmed fish, pigs, and poultry." Although feeds derived from soy and other land-based crops are available and are used, fishmeal and fish oil have skyrocketed in popularity because forage fish are easy to catch in large numbers, and hence, relatively inexpensive.

Entitled "Forage Fish: From Ecosystems to Markets," the study is a product of the nine-year Sea Around Us Project, a partnership between the University of British Columbia in Vancouver and The Pew Charitable Trusts. The Sea Around Us Project has been primarily funded by the Pew Institute for Ocean Science, which is now the Institute for Ocean Conservation Science at Stony Brook University. The abstract is available online at http://arjournals.annualreviews.org/toc/energy/33/1.

"It defies reason to drain the ocean of small, wild fishes that could be directly consumed by people in order to produce a lesser quantity of farmed fish," said Dr. Ellen K. Pikitch, executive director of the Institute for Ocean Conservation Science and a Professor at Stony Brook University's School of Marine and Atmospheric Sciences. "Skyrocketing pressure on small wild fishes may be putting entire marine food webs at great risk."

Forage fish account for a staggering 37 percent (31.5 million tonnes) of all fish taken from the world's oceans each year, and 90 percent of that catch is processed into fishmeal and fish oil. In 2002, 46 percent of fishmeal and fish oil was used as feed for aquaculture (fish-farming), 24 percent for pig feed, and 22 percent for poultry feed. Pigs and poultry around the world consume more than double the seafood eaten by Japanese consumers and six times the amount consumed by the U.S. market.

Despite this large-scale extraction, few management plans have been created to guide the sustainable removal of these fish, and little is known about the role of forage fish in the marine ecosystem and how fishing impacts them. The most intensive commercial use of these fish is for farmed-animal feed, but there is also a growing demand for human fish oil supplements. In some areas of the world, especially developing countries, almost all of the small fish used as farm feed are, or once were, eaten by people. These include the Peruvian and European anchovy, capelin, Japanese pilchard, round sardinella, and European anchovy. "The use of forage fish for animal husbandry competes directly with human consumption in some areas of the world," the authors write. Excessive removal of forage fish could also hurt populations of seabirds and marine mammals that rely upon them as food.

"We must find a better way to manage forage fisheries before we cause irreversible damage to the broader ocean environment which depends on them as a food source," said Joshua Reichert, managing director of the Pew Environment Group. "Human beings are not the only, or necessarily, the most important consumer of these fish. Whatever people take out of the sea needs to be carefully calibrated to ensure that sufficient fish are left to sustain populations of other fish, seabirds and marine mammals which all play a major role in the healthy functioning of the world's oceans."

This fall the Institute for Ocean Conservation Science at Stony Brook University will launch the Lenfest Forage Fish Task Force, a team of preeminent scientists and policy experts from around the world that will address this escalating environmental dilemma. The Task Force will be chaired by Dr. Pikitch and funded by the Lenfest Ocean Program. Task force members will by 2010 develop scientific approaches to sustainably manage forage fisheries using "ecosystem-based fisheries management," which emphasizes the interconnectedness of species and habitats and breaks from traditional species-by-species management.

The Sea Around Us Project was established in 1999 at the University of British Columbia to study the impact of fishing on the world's marine ecosystems. Project scientists have collected and organized data on the world's fish catches dating back to 1950, mapping and comparing global catches over time. The massive database for forage fisheries includes information on calculated landings in the past six decades, the changes in species composition of fishmeal, and consumption by seabirds in different world regions. Visit www.seaaroundus.org/project.htm

The Institute for Ocean Conservation Science conducts scientific research about critical threats to oceans and their inhabitants, providing the foundation for smarter conservation policy. The Institute is a major research program of Stony Brook University's School of Marine and Atmospheric Sciences and was founded as the Pew Institute for Ocean Science in 2003. Visit us online at http://www.oceanconservationscience.org and http://www.somas.stonybrook.edu

"Forage Fish: From Ecosystems to Markets," in, Annual Review of Environment and Resources (Nov-2008)