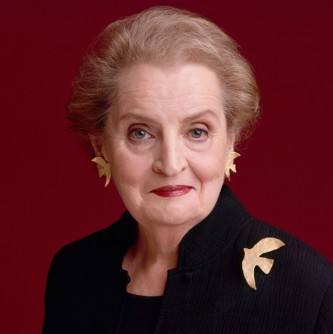 Newswise — WELLESLEY, Mass. (Feb. 21, 2017)—On Sunday, February 26, the Madeleine Korbel Albright Institute for Global Affairs at Wellesley College will convene two panels of international leaders and experts for a public forum on the global refugee crisis and its many sociopolitical and geopolitical ramifications. Beginning with a keynote from Former Secretary of State Madeleine K. Albright ’59, the day-long dialogue will feature a variety of perspectives, including international reporters, nonprofit leaders, and academics. The Public Dialogue, “From Exodus to Action: Claiming our Common Humanity in the Refugee Crisis,” aims to tackle the demands of advancing beyond resettlement into rebuilding society.

Some of the many speakers who will attend include George Papandreou, president, Socialist International, and former Greek Prime Minister; Anne C. Richard, Assistant Secretary of State for Population, Refugees, and Migration; Manal Omar, Associate Vice President, Center for Middle East and Africa, United States Institute for Peace; and ten other renowned professionals.

Former Secretary Albright stated, “We are privileged to welcome 13 esteemed experts who each offer valuable insight on the refugee crisis facing our global community. Now is the time to engage in open discussion on how we as leaders and global citizens alike can join forces to best manage this international crisis. I am delighted that Wellesley College offers us an inclusive environment where we can have these important conversations.”

“History is watching our action (and inaction) as the displaced, the persecuted and those fleeing war and strife seek safety, new lives, new homes,” said Wellesley College President Paula A. Johnson. “We must not forget that women and girls are especially at risk. These same women and girls—as well as the millions fighting for their rights—will be the agents of change we need to create a way forward for everyone. Wellesley College is proud to be part of that movement, and this year’s Albright Institute Public Dialogue is evidence of our commitment.”

As part of its mission, the Albright Institute provides Wellesley students a transformative experience that allows them to apply their liberal arts education toward solving problems in the international arena. The students, known as Albright Fellows, spend three weeks in January learning about global affairs in intensive classes and panel discussions as well as working together in interdisciplinary groups to address pressing current issues.

The event begins at 10:15 a.m. on Feb. 26. Both panels are free and open to the public. For those that cannot attend, these events will be live-streamed on Wellesley’s website, and the Twitter hashtag #AlbrightDialogue will be used for social media posts related to the event, including live tweeting. For full details, see this public schedule.

About the Albright InstituteThe Madeleine Korbel Albright Institute for Global Affairs at Wellesley College supports the College's mission of educating students for leadership in an increasingly complex and interconnected global environment. The program combines the intellectual resources of faculty from Wellesley College, researchers from the Wellesley Centers for Women, and leading alumnae and other practitioners and policy makers in the fields of international relations and public policy.

About Wellesley CollegeSince 1875, Wellesley College has been a leader in providing an outstanding liberal arts education for women who will make a difference in the world. Its 500-acre campus near Boston is home to some 2,400 undergraduate students from 49 states and 58 countries.

About the Panelists Secretary Madeleine K. Albright '59, U.S. Secretary of State (1997-2001)Madeleine Albright is an American diplomat. Dr. Albright was the 64th Secretary of State of the United States. In 1997, she was named the first female Secretary of State and became, at that time, the highest-ranking woman in the history of the U.S. government. From 1993 to 1997, Dr. Albright served as the U.S. Permanent Representative to the United Nations and was a member of the President’s Cabinet. She is a professor in the practice of diplomacy at the Georgetown University School of Foreign Service. Dr. Albright chairs the National Democratic Institute for International Affairs. She is also the president of the Truman Scholarship Foundation. In 2012, she was chosen by President Obama to receive the nation’s highest civilian honor, the Presidential Medal of Freedom, in recognition of her contributions to international peace and democracy.

Deborah Amos, International Correspondent, NPR NewsDeborah Amos covers the Middle East for NPR News and is reporting on refugee resettlement in the U.S. Her reports can be heard on NPR's award-winning Morning Edition, All Things Considered and Weekend Edition.

George Papandreou, President, Socialist International; Greek Prime Minister (2009-2011)George Papandreou is former prime minister of Greece, current president of Socialist International and co-chair of the Democratic Alignment, a coalition of the center-left parties in Greece, composed by the Panhellenic Socialist Movement (PASOK), the Democratic Left and the Movement of Socialists and Democrats.

Anne C. Richard, Assistant Secretary of State for Population, Refugees, and Migration (2012-2017)Anne C. Richard is a visiting fellow at the University of Pennsylvania's Perry World House and an adjunct professor at Georgetown University.