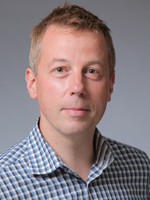 Newswise — NYU Langone Medical Center is pleased to announce that Alexander Neumeister, MD, professor of psychiatry and radiology, was honored with the Robert S. Laufer, PhD, Memorial Award for Outstanding Scientific Achievement by the International Society for Traumatic Stress Studies (ISTSS) Awards Committee, bestowed annually upon an individual or group who has made an outstanding contribution to research in the field of traumatic stress. Dr. Neumeister will receive this award at the ISTSS 28th Annual Meeting, November 1-3, 2012, in Los Angeles, CA.

“Our outstanding faculty have a long-standing legacy of innovation, and we are thrilled that the important research Dr. Neumeister is doing on PTSD has been recognized by the ISTSS,” said Dafna Bar-Sagi, PhD, senior vice president and vice dean for Science and chief scientific officer at NYU School of Medicine.

Dr. Neumeister’s research, in collaboration with his colleagues, is focused on explaining the role of neurochemicals like endocannabinoids in mediating the behavioral response to trauma. His work may show that this system is key to the development of post-traumatic stress disorder (PTSD) and that the abnormal function of this system could lead to development of novel treatments for this disorder. According to the National Institutes of Mental Health (NIMH), approximately 7.7 million American adults age 18 and older, or about 3.5 percent of people in this age group in a given year, have PTSD.

In addition to the Robert S. Laufer, PhD, Memorial Award for Outstanding Scientific Achievement, Dr. Neumeinster is also the recipient of numerous national and international awards, most notably the Max Hamilton Award from The International College of Neuropsychopharmacology (CINP) and the A.E. Bennett Award of the Society of Biological Psychiatry. His work has been published in leading neuroscience journals, such as the Archives of General Psychiatry, The Journal of Neuroscience, Pharmacogenetics and Genomics, among others.

Prior to joining NYU Langone in December 2011, Dr. Neumeister was the director of the Translational Research Program for Mood and Anxiety Disorders at Mount Sinai School of Medicine, Director of the Molecular Imaging Program at the National Center of Posttraumatic Stress Disorders and Associate Professor of Psychiatry at Yale University School of Medicine for six years, and held a position at the NIMH’s Mood and Anxiety Disorders Program in Bethesda, MD. He was also a research fellow at the NIMH after completing medical school. Before coming to the United States, he was an Associate Professor of Psychiatry at the University of Vienna in Austria, where he completed his medical school degree and residency training in Psychiatry and Neurology.

Dr. Neumeister has received federal funding from the National Institutes of Health (NIH), Department of the Defense, and the Department of Veterans Affairs to conduct molecular imaging studies of stress-related disorders, like PTSD, depression or addiction disorders, and to determine the neurobiological underpinnings of these conditions with the ultimate goal to identify novel targets for treatment development.

The ISTSS was founded in 1985 for professionals to share information about the effects of trauma. Each year at its annual conference, the ISTSS recognizes member achievements related to traumatic stress through its awards program. Ellen Frey-Wouters established the Robert S. Laufer, PhD, Memorial Award for Outstanding Scientific Achievement in memory of her husband, Robert S. Laufer, PhD, a sociologist whose research on the effects of combat and captivity led to the creation of counseling programs for Vietnam War veterans.

For more information on Dr. Neumeister and the Department of Psychiatry, visit the Department’s website at http://psych.med.nyu.edu/department-psychiatry.

About NYU Langone Medical CenterNYU Langone Medical Center, a world-class, patient-centered, integrated, academic medical center, is one of the nation’s premier centers for excellence in clinical care, biomedical research and medical education. Located in the heart of Manhattan, NYU Langone is composed of four hospitals – Tisch Hospital, its flagship acute care facility; the Rusk Institute of Rehabilitation Medicine, the world’s first university-affiliated facility devoted entirely to rehabilitation medicine; the Hospital for Joint Diseases, one of nation’s leading hospitals dedicated to orthopaedics and rheumatology; and Hassenfeld Pediatric Center, a comprehensive pediatric hospital supporting a full array of children’s health services across the Medical Center – plus the NYU School of Medicine, which since 1841 has trained thousands of physicians and scientists who have helped to shape the course of medical history. The medical center’s tri-fold mission to serve, teach and discover is achieved 365 days a year through the seamless integration of a culture devoted to excellence in patient care, education and research. For more information, go to www.NYULMC.org.