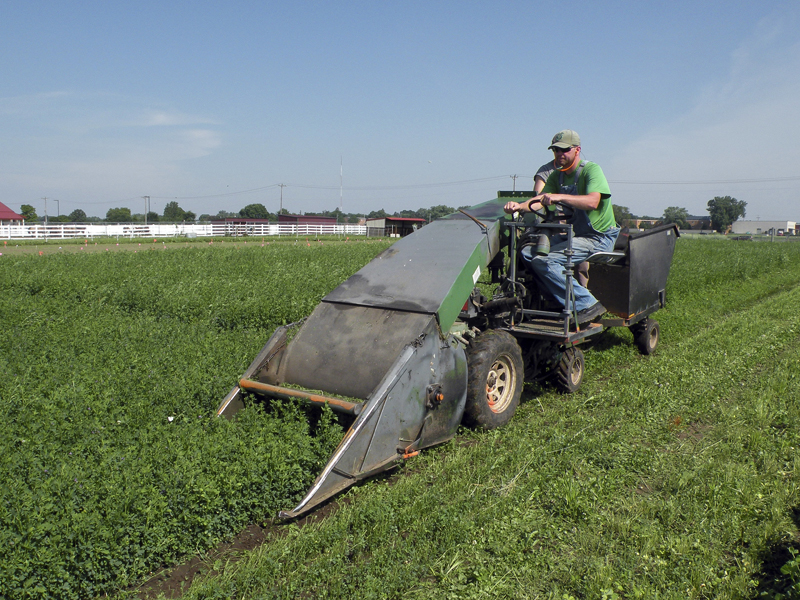 Newswise — Has anyone ever told you to eat a banana when you have a muscle cramp or eye twitch? That’s because bananas have potassium. Potassium is an important nutrient for humans, and an even more important nutrient when it comes to alfalfa.

With an economic value of $9 billion annually in the United States, alfalfa is the most valuable crop behind corn and soybeans. Because of its high nutritional content, alfalfa is a common feed source for farm animals like cattle, horses, sheep and goats. So, understanding this relationship between alfalfa and potassium is a worthwhile goal.

“Potassium plays a role in many processes within an alfalfa plant,” says Jacob Jungers, a researcher at University of Minnesota. “For example, it’s important for converting sunlight to energy, transporting molecules and growing new cells.”

However, too much potassium can be a problem. “When alfalfa plants are given more potassium than they need, the concentration of potassium in the tissues increases,” says Jungers. “This is called luxury consumption.”

Our bodies do this too. We store certain vitamins in our fat cells when we consume more than we need.

This increased concentration of potassium affects the nutritional balance of alfalfa as a feed source for livestock. High potassium concentrations are especially concerning if fed to lactating dairy cows. “In addition to being costly for growers, over-fertilization can put dairy cows at risk of milk fever,” says Jungers. Milk fever is a metabolic disease cows can get around the time of calving that causes weakness, and sometimes even death.

So, Jungers and his team wanted to identify potassium fertilization rates that increase yield and nutritive value, while reducing potassium concentration in the tissue.

Researchers experimented with five different rates of potassium fertilizer on alfalfa fields. Throughout the four-year study, they took measurements of the yield, nutritive value, and potassium concentrations in the plant tissue. Soil samples were also taken to track the potassium levels in the soil.

“Many soil types are abundant in potassium, but relatively little is available to crops at any given time,” he says. “The amount of potassium that might someday be available to crops is largely dependent on soil texture, moisture, and other environmental factors.” Potassium fertilizer rates for alfalfa should be determined based on expected yield, soil test levels, and if the crop will be fed to cows.

Understanding tradeoffs between alfalfa yield and quality is important for fertility management and sustainable production. Measuring and reporting these tradeoffs helps growers make the best decisions for their operations.

Read more about this research in Agronomy Journal. This work was funded by the Minnesota Department of Agriculture Fertilizer Research and Education Council and the Midwest Forage Association.