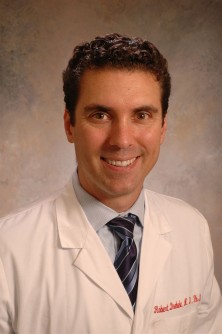 Newswise — A University of Colorado Cancer Center study presented at the 50th Annual Meeting of the American Society for Clinical Oncology (ASCO) draws a line from mutation of the gene NTRK1, to its role as an oncogene in non-small cell lung cancer, to treatment that targets this mutation. The current study reports the prevalence of the NTRK1 mutation in an unselected population of 450 lung cancer samples, with >1% percent of patients testing positive. This and other work from Dr. Doebele’s group forms the basis of a phase 1 clinical trial targeting NTRK1 mutations in advanced solid tumors (NCT02122913).

“Everything we know about lung cancer points to the idea that when we find one of these genetic drivers and can target it with a drug, patients will respond and tend to have a good amount of time on drug before it becomes ineffective. Obviously we can’t guarantee the effectiveness of targeting the NTRK1 mutation at this point, but everything we know about these kinds of genes makes us extremely hopeful,” says Robert C. Doebele, MD, PhD, investigator at the CU Cancer Center and associate professor of Medical Oncology at the CU School of Medicine.

Previous work in collaboration with Pasi A. Jänne, MD, PhD from the Dana-Farber Cancer Institute, examined lung cancer tumor samples from 36 “pan-negative” patients, meaning that no other driver oncogene had been identified. Next-gen sequencing at Foundation Medicine (Cambridge, MA) identified NTRK1 gene fusions as the potential driver in two of these samples.

Doebele and colleagues took the finding back to CU labs, where Marileila Varella-Garcia, PhD, developed a specific test for NTRK1 fusions based on fluorescence in situ hybridization (FISH), similar to what is currently used for ALK, ROS1 and RET fusions. This test would allow rapid detection of NRTK1 oncogenes in patient samples. “But no one had ever looked for NTRK1 mutations in a large series of unbiased patient samples,” Doebele says. “The point of this study was to get a better sense of how many lung cancer patients are likely to be positive for NTRK1 mutations and what these patients are likely to look like.”

Of 450 evaluated patient samples of non-small cell lung cancer, 5 tested “positive” and another 12 are considered suspicious for the mutation. Next generation sequencing studies revealed 5 previously undescribed NTRK1 mutations. Ongoing work seeks to tease apart the subtleties of diagnosis to further refine the criteria used to decide which tumors are truly created by the NTRK1 mutation.

Again, just as the FDA-approved drug crizotinib targets ALK fusions in an affected subset of lung cancer, the goal of the current line of research is to identify patients whose cancers are caused by NTRK1 and similarly target these patients with a drug that silences the problem gene. Toward that goal, Array BioPharma (Boulder, CO) provided candidate drugs to inhibit mutated NTRK1. Loxo Oncology, Inc. has managed further testing of the leading drug candidate, now known as LOXO-101. A phase 1a/1b clinical trial of the drug in advanced solid tumors is now recruiting patients.

“We found the mutation in a patient sample in 2012, published a manuscript in 2013 describing NTRK1 as a driver of lung cancer, and now here we are in May 2014 laying the groundwork for a clinical trial of drugs targeting this mutation,” Doebele says. “Having seen this approach work well with other mutations in the past, the team is optimistic that this research could help control another important subset of lung cancers.”