Alligator Blood May Put the Bite on Antibiotic-resistant Infections 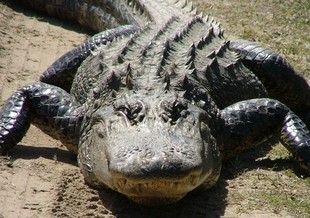 Alligator blood could provide a powerful new source of antibiotics for fighting deadly %u2018superbugs' and other infections, researchers say.

Newswise — Despite their reputation for deadly attacks on humans and pets, alligators are wiggling their way toward a new role as potential lifesavers in medicine, biochemists in Louisiana reported today at the 235th national meeting of the American Chemical Society. They described how proteins in gator blood may provide a source of powerful new antibiotics to help fight infections associated with diabetic ulcers, severe burns, and "superbugs" that are resistant to conventional medication.

Their study, described as the first to explore the antimicrobial activity of alligator blood in detail, found a range of other promising uses for the gator's antibiotic proteins. Among them: combating Candida albicans yeast infections, which are a serious problem in AIDS patients and transplant recipients, who have weakened immune systems, the scientists say.

"We're very excited about the potential of these alligator blood proteins as both antibacterial and antifungal agents," says study co-author Mark Merchant, Ph.D., a biochemist at McNeese State University in Lake Charles, La. "There's a real possibility that you could be treated with an alligator blood product one day."

Previous studies by Merchant showed that alligators have an unusually strong immune system that is very different from that of humans. Unlike people, alligators can fight microorganisms such as fungi, viruses, and bacteria without having prior exposure to them. Scientists believe that this is an evolutionary adaptation to promote quick wound healing, as alligators are often injured during fierce territorial battles.

In collaboration with Kermit Murray and Lancia Darville, both of Louisiana State University in Baton Rouge, Merchant and colleagues collected blood samples from American alligators. They then isolated disease-fighting white blood cells (leucocytes) and extracted the active proteins from those cells.

In laboratory tests, tiny amounts of these protein extracts killed a wide range of bacteria, including MRSA (methicillin-resistant Staphylococcus aureus), the deadly bacteria that are moving out of health care settings and into the community. These "superbugs" are increasingly resistant to multiple antibiotics and cause thousands of deaths each year.

The proteins also killed six out of eight different strains of Candida albicans, the researchers say. Their previous research also suggests that blood proteins may help fight HIV, the virus that causes AIDS.

The scientists are working to identify the exact chemical structures of the antimicrobial proteins and determine which proteins are most effective at killing different microbes. The gator blood extract may contain at least four promising substances, they estimate.

With the chemical structures in hand, scientists can begin developing them into antibacterial or antifungal drugs, including pills and creams, for fighting infections. These drugs show particular promise as topical ointments, Merchant says. Gator-blood creams could conceivably be rubbed onto the foot ulcers of patients with diabetes to help prevent the type of uncontrolled infections that lead to amputations, he says. The creams could also be applied to the skin of burn patients to keep infections at bay until damaged skin can heal, the researcher adds.

Merchant suggests that the proteins might be called "alligacin." If studies continue to show promise, the drugs could land on pharmacy shelves in another seven to ten years, he estimates. Until then, don't try to create your own home-remedies using alligator blood, as raw, unprocessed blood could make you sick or even kill you if injected, the researcher cautions.

Similar antimicrobial substances might also be found in related animals such as crocodiles, Merchant notes. In the future, he plans to study blood samples from alligators and crocodile species throughout the world to test their disease-fighting potential. The state of Louisiana and the National Science Foundation provides funding for this research.

The poster on this research, ANYL 081, will be presented at 7:00 p.m., on Sunday, April 6, at the Morial Convention Center, Hall A, during the symposium, "General Poster Session."

Mark E. Merchant, Ph.D., is an Associate Professor of Biochemistry in the Department of Chemistry at McNeese State University in Lake Charles, La.

Abstract We are using mass spectrometry based proteomics to investigate immune related proteins of the American alligator (Alligator mississippiensis). Alligators have an innate immune system, meaning that they require no specific exposure to an antigen to illicit an immune system response. Alligators were captured and blood was drawn from internal jugular vein. Adult alligators were injected with lipopolysaccharide (LPS) to activate their immune system. Serum was collected from the whole blood by homogenizing and centrifugation followed by salt removal using 20% trichloroacetic acid. Proteins expressed after exposure to LPS was separated using 2D-gel electrophoresis. The down-regulated proteins were isolated and digested for identification. Analysis was performed using nano-ESI-MS/MS on a quadrupole time-of-flight mass spectrometer and identified with MASCOT using MSDB and NCBInr database. When uninfected alligator serum was compared to LPS exposed serum the protein expression changed, indicating that the alligators produce significant innate immunological proteins when exposed to an infection. ________________________________________Researcher Provided Non-Technical Summary

Briefly explain in lay language what you have done, why it is significant and what are its implications (particularly to the general public)

The focus of this research is the immune system of the American alligator. Studies have shown that the American alligator has an immune system very different than that of humans; their bodies can fight microorganisms, like fungi, virus and bacteria without ever being exposed to them. Therefore, this research involves the study of the different proteins in the American alligator's white blood cells, specifically antibiotic peptides, which are responsible for fighting infections. In order to separate the peptides from the alligator blood, the alligator was first captured, blood was drawn, and the different components of the blood, such as the white blood cells, red blood cells and serum were separated. Once the significant peptides are isolated and identified from the alligators, they can be mimicked as antibacterial or antiviral drugs to be used by humans. This drug may allow a human's body to combat foreign bacteria or viruses, and hopefully some day combat the human immunodeficiency virus (HIV). Within the last 25 years more than 1.7 million people in the United States have been infected with HIV and to date a cure has not been found. Previous studies have shown that when exposing the alligator's white blood cells to HIV, which was inoculated on a petri dish in a lab, most of the virus was destroyed. Therefore, we have evidence that we are heading in a promising direction.

Studies of the American alligator (Alligator mississippiensis) immune activity has been undergoing study for the last 4 years by our collaborator, Dr. Mark Merchant. He has studied the American alligator's antiviral activity of serum using cell-based assays, its serum antibacterial activity, the antimicrobial activity of the leukocytes and the effects of lipopolysaccharide (LPS) on leukocytes. On our end of this project we are isolating and identifying the antibiotic peptides responsible for the significant antimicrobial activity, which has not been done previously. In addition, we would like to identify potential sequences for these antibiotic peptides.