ALMA’s 2014 Ground-Breaking HL Tau Results Have Appeared in Over 1,000 Scientific Papers in Less Than a Decade

Set for major upgrades in 2030, ALMA continues to bring unprecedented depth and understanding to celestial objects near and far 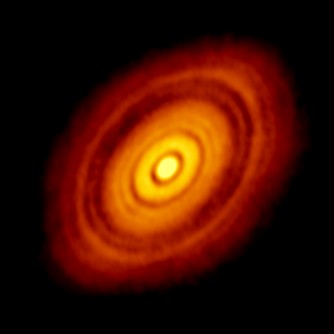 ALMA image of the young star HL Tau and its protoplanetary disk. This best image ever of planet formation reveals multiple rings and gaps that herald the presence of emerging planets as they sweep their orbits clear of dust and gas.

Newswise — Ground-breaking 2014 HL Tau observational data from the Atacama Large Millimeter/submillimeter Array (ALMA) has been cited in more than 1,000 scientific studies in the past 7.5 years, aiding in major breakthroughs in scientists’ understanding of planet formation. The milestone comes as engineers at the U.S. National Science Foundation’s National Radio Astronomy Observatory (NRAO) embark on ambitious upgrades to the receivers responsible for the clarity of initial observations.

During science verification testing of ALMA’s then-new high-resolution capabilities in 2014, astronomers turned the telescope on HL Tau, a very young star system located 450 light years away from Earth in the constellation Taurus. The resulting image uncovered astonishing details in the planet-forming disk surrounding the Sun-like star and laid the foundation for what has become nearly a decade of increasingly revelatory research. “When we were planning the first ALMA Long Baseline Campaign in 2014, targets were chosen for a range of science categories that were bright and well-studied at lower angular resolution, and that might show, as yet unrevealed, structure at higher angular resolution,” said Crystal Brogan, an astronomer at NRAO and the lead author of the original results paper, which published in The Astrophysical Journal in 2015 and was made possible by a wide range of scientists and engineers across the global ALMA collaboration. “For the protoplanetary disk topic, we were anxious about the potential that we would see little to nothing, certainly nothing spectacular. At that time, there was little indication that there would be much substructure in disk morphology at this relatively young stage of protoplanetary disk evolution. In other words, we feared it could be a flop.”

Ultimately, scientists unveiled not only the best image ever produced using ALMA, but also the clearest picture at the time of planet formation, with detail previously available only in computer simulations and artists’ conceptions. The never-before-seen features in the young star system— including multiple concentric rings separated by clearly defined gaps that were revealed in even greater detail by NSF’s Karl G. Jansky Very Large Array (VLA) in 2016— are now considered hallmarks of planet formation. “The extraordinary level of substructure that we observed in HL Tau, that could only be revealed by ALMA’s longest baselines, has changed the paradigm of protoplanetary disk formation, evolution and ultimately our understanding of planet formation, forever,” said Brogan. “The remarkable number of papers to date is a direct consequence of its scientific impact.” Similar substructure has now been observed in a wide range of protoplanetary disks with more being observed by ALMA every year. However, HL Tau will forever be the first.”

Stuartt Corder, Deputy Director of ALMA, and a co-author of the original results paper added, “The result was truly moving, beautiful as well as profound. Hard work over decades, plus a dramatic sprint to finish the infrastructure in the middle of 2014, enabled this dramatic and transformational result.”

In addition to providing evidence for long-held theories of planet formation, the 2014 observations of HL Tau opened new windows on the Universe for both professional scientists and aspiring astronomers alike. Todd Hunter, an astronomer at NRAO and a co-author of the original results paper said, “Eighty-three of these citations are from PhD theses, meaning that the careers of an entire generation of young astronomers have been influenced by it.” Hunter added that forthcoming NSF-supported upgrades to ALMA’s 1.3mm (Band 6) receivers— which were developed at NRAO’s Central Development Laboratory (CDL) and were instrumental in capturing the now-famous images— will further increase the telescope’s capabilities to reveal the secrets of how star systems evolve and planets are formed. “ALMA has recently embarked on a Wideband Sensitivity Upgrade to improve the sensitivity and spectral grasp of the observatory, which will include the development and deployment of more powerful digital signal processing technology. These combined upgrades are essential to enable the next fundamental leap forward in understanding planet formation, as they will vastly increase the number of molecules that can be studied in detail in a single observation of a circumstellar disk”