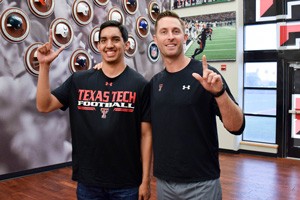 Newswise — DeAnn Lechtenberger will never forget a phone call she received more than a decade ago. It was about 40 degrees outside and sleeting, and the Texas Tech University student on the other end needed a favor. He had cerebral palsy, used a walker and needed a signature from an administrator on campus.

“He called and said, ‘would you please look up when the office closes? I’m afraid I’m not going to get there on time,’” he told her.

Lechtenberger, a professor of special education, looked up the office hours, and told the student he had until 5 p.m. Be careful out there, she added.

“I’ve got a list of things I’ve got to get signed off,” the student told her. “He was listing all these people he had to get signatures from the week it’s sleeting and cold outside.”

After the phone call Lechtenberger kept thinking about this situation. The student got grant money to pay for housing and scholarships to pay for tutoring, all from different organizations. He couldn’t drive, so he either walked or made arrangements with Citibus. She asked him later if he’d ever had a meeting where all the people he needed to sign his paperwork attended and passed the papers around instead of him walking all over campus.

The next time around she set up that meeting with the help of Student Disability Services. It worked. In addition to getting the paperwork completed, the different agencies got a better idea of what the student needed and how his needs could be met.

Lechtenberger remembered this student as she was preparing a grant proposal for the Texas Council on Developmental Disabilities. Her idea was to create a program that would provide college students with autism spectrum disorder (ASD) and other developmental disabilities with a support group. A number of students with ASD attend college, but many drop out soon after – not for lack of academic ability, but because they never find a way to overcome organizational and relationship difficulties brought on by autism.

That program, in its fifth year at Texas Tech, is known as Project CASE and helps dozens of students succeed in college. It was highlighted this month on Friendship Circle, a special needs resource, as one of 10 collegiate programs in the nation to offer services to college students with autism spectrum disorder. It also is facing a major change; the grant expires this year and CASE administrators, while seeking more grants and other private funding, also are charging a fee for enrollment for the first time.

However, Lechtenberger said, it remains critical to success for an otherwise marginalized group. CASE has a 76 percent retention rate. It’s almost twice the nationwide retention rate of students with ASD without additional support, and close to the 83 percent retention rate of Texas Tech as a whole. In July Lechtenberger and other administrators joined with a student and his parents at the National Association of Councils on Developmental Disabilities to discuss the success the program has seen.

In the program's four years, 19 students have graduated and 18 are competitively employed. Their college experiences have included study abroad programs, internships and undergraduate research. It also has helped students make friends, get along with roommates, interact with professors and employers and prepare for life after college.

“The first year of the program one student called me from across campus and said, ‘Can I please come in and talk to you? I’m alone in the middle of 30,000 people,’” Lechtenberger said. “That just really kind of sums it up. Our students want to connect with other students and feel like they’re part of the Red Raider family.”

Read more about Project CASE, its innovation approach to support and stories of the students who have found success they and their families didn't anticipate experiencing during the K-12 years.

Photos are available upon request.