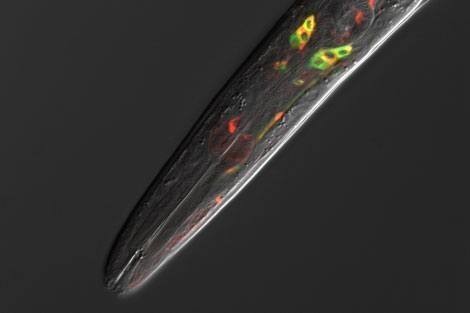 CRTC-1 (Red) in sensory neurons (Green) in the head of C. elegans mediates healthy aging via a neurotransmitter signal

The new study shows that there may be therapeutic alternatives to caloric restriction that produce similar benefits while avoiding some of the negative side effects, which in humans can include decreased fertility and immunity.

The study focused on a molecule called “AMP-activated protein kinase,” or AMPK, which acts as a molecular fuel gauge to detect energy levels. It’s been known that AMPK plays important roles in all cell types, but researchers didn’t understand which of these activities were most critical to regulating longevity.

The researchers found that AMPK inhibited the activity of a protein called CRTC-1 in neurons. This process, in turn, controlled the behavior of mitochondria—the primary energy-producing organelles in cells—throughout the organism, by altering production of a neurotransmitter. The researchers were struck by the fact that altering the AMPK pathway in just a limited set of neurons was sufficient to override its effects on metabolism and longevity in other tissues. Aging was influenced more by what the animals perceived they were eating than what they actually ate.

The study suggests that manipulating this energy-sensing pathway can cause organisms to perceive their cells to be in a low-energy state, even if they are eating normally and energy levels are high. Drugs targeting the cells’ energy-sensors in this way could potentially address age-related diseases, including cancer and neurodegeneration, and may offer an alternative to caloric restriction.

The new finding could have significant public health implications, given that aging is the central risk factor for the majority of complex diseases, and the disease burden of the elderly is one of the key challenges to public health in the 21st century.

Harvard T.H. Chan School of Public Health brings together dedicated experts from many disciplines to educate new generations of global health leaders and produce powerful ideas that improve the lives and health of people everywhere. As a community of leading scientists, educators, and students, we work together to take innovative ideas from the laboratory to people’s lives—not only making scientific breakthroughs, but also working to change individual behaviors, public policies, and health care practices. Each year, more than 400 faculty members at Harvard Chan teach 1,000-plus full-time students from around the world and train thousands more through online and executive education courses. Founded in 1913 as the Harvard-MIT School of Health Officers, the School is recognized as America’s oldest professional training program in public health.