Although Their Introductions as Treatment Are Different, Two Top Medications for Opioid Addiction Are Equally Effective 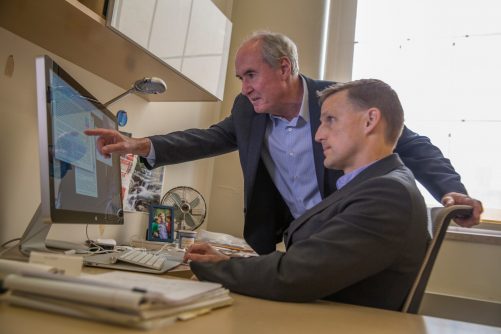 Newswise — With opioid addiction officially declared a public health emergency in the U.S., medical intervention to treat the illness is increasingly important in responding to the epidemic. Now, a new study concludes that two of the top medications available for outpatient, office-based treatment, once initiated, are equally safe and effective in curtailing opioid use, relapse, treatment drop-out and overdose.

Researchers in the Departments of Psychiatry and Population Health at NYU School of Medicine, who led the study sponsored by the National Institute on Drug Abuse (NIDA) and published online November 14, 2017 in The Lancet, conclude that extended-release naltrexone (an opioid antagonist marketed as Vivitrol) demonstrated similar safety and clinical effectiveness to more commonly prescribed buprenorphine-naloxone (an opioid agonist marketed both generically and as Suboxone).

However, the study also points out differences that have previously been known: Patients being treated with naltrexone must detoxify before it can be administered. (This is commonly referred to as the “detox hurdle.”) On the other hand, buprenorphine allows individuals to transition relatively seamlessly from opioid use to medication maintenance without needing to detoxify.

Agonist (buprenorphine) and antagonist (naltrexone) treatment are pharmacologically, conceptually and logistically near-opposites -- allowing patients, families and providers to choose an approach in line with their goals and preferences. Among the differences:

Despite these differences, the researchers say, until now there had been no comparative data on the effectiveness of both treatments. “As the epidemic has escalated, and hundreds of people in the U.S. and elsewhere are dying every day, there is an increased urgency to provide immediate and effective medical treatment,” says John Rotrosen, MD, professor in the Department of Psychiatry at NYU School of Medicine and the study’s senior author. “Our findings should dispel some commonly held misconceptions and help patients choose between these different approaches to treatment.”

What the Study Examined

The clinical trial took place from 2014 to 2017 at eight community treatment programs affiliated with NIDA’s Clinical Trials Network across the U.S. The patient cohort involved 570 opioid dependent adults, approximately two-thirds of whom were men and 82% primarily using heroin. They were recruited during admission for detoxification and randomly assigned to two study groups for up to 24 weeks of treatment. One group received a monthly injection of naltrexone initiated after completing detoxification, and the other self-administered a daily oral dose of buprenorphine initiated as early as possible after randomization.

Among those treated, 24-week relapse rates were similar -- 52% for naltrexone and 55.6% for buprenorphine, as were other measures of opioid use. In addition, craving for opioids was lower with naltrexone, though by the end of 24 weeks, the buprenorphine group had caught up. Other than mild to moderate injection site reactions with naltrexone, adverse events, including fatal and non-fatal overdoses, were similar across the two study groups.

The study also examined the detox hurdle -- a critical point of initiation for active users (though a non-issue for those who are already fully detoxed). Approximately 25% of participants assigned to the naltrexone group were unable to complete detox and get a first dose of naltrexone -- though for those assigned to naltrexone later in the detox process, the hurdle wasn’t so insurmountable. In contrast, only 6%, of patients were unable to start buprenorphine.

The study could have immediate implications for how the U.S. responds to a crisis that has already claimed 300,000 lives since 2000, according to the U.S. Centers for Disease Control and Prevention.

“Both medications are effective treatments for opioid use disorders versus counseling-only approaches or compared to placebo,” says Joshua D. Lee, MD, MSc, associate professor in the Departments of Medicine and Population Health at NYU School of Medicine and the study’s lead author. “What is now clear is how similar the outcomes are for those initiating treatment with either medication.”

The researchers also point out that the study sheds light on the likelihood that those dropping out of detox will rapidly relapse. “Patients wanting naltrexone, but who are unable to complete detox,” Lee adds, “should be encouraged to start an agonist-based treatment like buprenorphine.”

A smaller (total cohort of 159 patients) and shorter (up to 12 weeks of treatment) parallel study conducted in Norway over the same period found naltrexone and buprenorphine to be equally effective in retaining patients in treatment and reducing opioid use. However, all participants in that study were randomized late in detox so there was no “hurdle” to clear. Prior to these two studies, the field had no comparative effectiveness data. An earlier multi-site clinical trial led by NYU School of Medicine found in 2016 that extended-release Naltrexone was effective at preventing opioid relapse in criminal justice offenders.