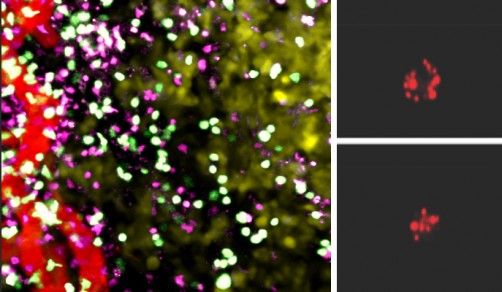 Newswise — Mountain climbers and endurance athletes are not the only ones to benefit from altitude training – that is, learning to perform well under low-oxygen conditions. It turns out that cancer-fighting cells of the immune system can also improve their performance through a cellular version of such a regimen. In a study published in Cell Reports, Weizmann Institute of Science researchers have shown that the immune system’s killer T cells destroy cancerous tumors much more effectively after being starved for oxygen.

Harnessing the immune system to battle malignancy – an approach known as cancer immunotherapy – has already started saving the lives of cancer patients in the past few years. In one major version of this approach, killer T cells are removed from the patient’s blood, grown in a laboratory dish, and adapted to identifying and destroying cancerous cells; they are then returned to the patient’s bloodstream. This method has so far worked best against certain leukemias and lymphomas, but not against solid tumors, possibly because within such tumors, oxygen concentration is extremely low: 0.5% to 5% of the gas dissolves in the extracellular fluid. This is lower than in most healthy organs, and certainly much lower compared with levels in a regular lab incubator, in which oxygen accounts for 20% of the gas dissolves in the culture fluid used for growing the cells.

Tumor cells manage to make effective use of glucose, the major cellular fuel, even when oxygen concentration is low. But T cells have a hard time penetrating tumors and performing their killing function. Previous studies had shown that growing T cells under low-oxygen conditions helps them kill other cells in a laboratory dish, but their actual cancer-fighting ability has never been tested.

“Killer T cells are the ones to target and destroy cancerous cells, but they don’t always manage to eliminate the malignancy,” says team leader Prof. Guy Shakhar of the Department of Immunology. “We’ve shown that by growing these T cells in an oxygen-poor environment, we can turn them into more effective killers.”

In the new study, research student Yael Gropper and staff scientist Revital Zehavi-Feferman from Prof. Shakhar’s team, together with Drs. Tomer Meir Salame and Ziv Porat of the Life Sciences Core Facilities Department and Dr. Tali Shalit of the Stephen and Nancy Grand Israel National Center for Personalized Medicine, put T cells through an altitude training of sorts – by growing them in an incubator with an oxygen concentration as low as 1%. They then divided mice affected by melanoma tumors into two groups; one group was injected with the oxygen-starved T cells, the other with T cells grown under regular oxygen conditions.

Oxygen-starved T cells proved much more effective at fighting the cancer. Mice treated with these cells lived longer and their tumors shrank much more dramatically compared with the mice treated with regular T cells. Surprisingly, the oxygen-starved T cells did not penetrate the tumors better than the regular cells. Apparently, they countered the cancer more successfully because they had a higher content of a destructive enzyme called granzyme B that penetrates and kills cancerous cells.

If these findings are confirmed with human T cells, they may provide an immediate means of improving immunotherapy against solid tumors. Prof. Shakhar states: “In cellular immunotherapy, T cells need to be removed and grown outside the body in any event. Growing them under low oxygen pressure is relatively simple, but this small adjustment to existing clinical protocols may significantly improve the therapy’s effectiveness.”

Prof. Guy Shakhar’s research is supported by the Dr. Dvora and Haim Teitelbaum Endowment Fund and Marion Sharp, UK. Prof. Shakhar is the incumbent of the Norman and Helen Asher Professorial Chair of Cancer Research.