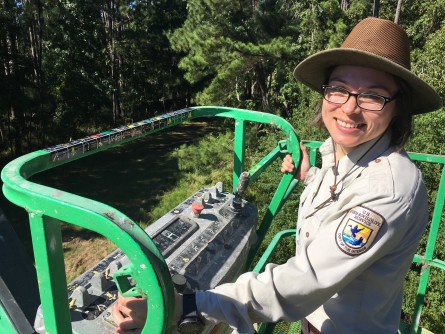 California State University alumni have made their mark across numerous industries—with many entering the vital parks and recreation space for conservation work, parks management, communications and beyond.

Newswise — With one in 10 employees in California holding a CSU degree, alumni have made their mark across the state’s industries—with many entering the vital parks and recreation space for conservation work, parks management, communications and beyond.

During the COVID-19 pandemic when people had nowhere to go but outside, outdoor spaces became more important than ever. A report from the Outdoor Foundation found that 7.1 million more Americans participated in outdoor activities in 2020 than the year before.

Meet five CSU alumni who have used their expertise to serve these important natural retreats.

“If we're not physically out there in person, the local community can see what we're doing through social media and our websites.” Fernandez says. “It's another way for us to stay connected, share with the public what's happening around the refuge and keep the dialogue going with people.”

Fernandez graduated from California State University, Stanislaus in 2015 with an anthropology degree, interested in studying how different cultures live harmoniously with nature. She originally thought she would need to live in other countries to work in the field, until she completed a training at Grand Teton National Park through the Student Conservation Association’s (SCA) National Park Service Academy.

“I realized I can do something here in the States,” Fernandez says. “I don't have to go that far, and it's still going to be a meaningful change in people's lives and in wildlife conservation.”

Her current work also takes Fernandez into the field to run events, teach school groups about land conservation and participate in wildlife surveys—such as a survey of San Diego County’s butterfly population in April 2022.

“I did not graduate with a biology or a zoology-type background; this is stuff I've been learning through work,” she says. “The job I do connects me with people who are experts in the field. It's fun being around these people who are always teaching me things, and then I can also share that with others.”

David Annis grew up just outside Yosemite National Park and the Sierra National Forest, where his family would hike, ski and take part in other outdoor activities. This early love for the great outdoors set him on a path to a career in the U.S. Forest Service.

“I’ve always been vested in public lands and maintaining them to be open and accessible, and that led me to follow the path of geology,” Annis says.

His first step was to join the Navy as a land surveyor. After leaving the Navy, he became the first in his family to earn a college degree, completing a bachelor's in geology at California State University, Fresno. While in school, Annis met an adjunct professor who had spent 40 years with the U.S. Forest Service. “He was that bridge who got me into the Forest Service and helped me understand what geologists do,” Annis says.

Annis then began his master’s in microstructural geology at Fresno State, but transferred to California State University, Northridge when he got a job as a forest geologist in the Angeles National Forest. He served in several other geology-related forestry positions before his current role as a regional geologist and certified mineral examiner for the U.S. Forest Service. In addition to studying forests’ landscapes as a geologist, Annis reviews large mine reclamation plans and performs geological and economical assessments of mines that predate protected wilderness areas.

Much of his work also focuses on reviewing the after-effects of wildfires as part of the burn area emergency response team. That includes assessing the risks of flooding, debris flows, landslides and rock falls, as well as monitoring abandoned mines and understanding the stability of the land if structures need to be rebuilt.

“We're the science team that comes in behind the firefighters and looks at how the fire impacted the landscape and watershed—with the goal of guarding the safety of Forest visitors and employees and protecting federal property, water quality and critical natural or cultural resources from further damage after the fire is out,” Annis says.

Though Bethany Szczepanski has long appreciated the national parks since visiting them as a child with her family, it was a meandering road to her current role at Channel Islands National Park. After she completed an undergraduate degree in theater, she worked as a costume designer, makeup artist and cake decorator before starting a master’s in recreation and tourism management at CSUN.

“In one of my courses, we were talking about national parks, and I always really liked them,” Szczepanski says. “I'm outdoorsy, I love hiking and then I started going down that path from there.”

During her master’s program, she interned in the education department of the Santa Monica Mountains National Recreation Area, becoming an early participant in the National Park Service’s Every Kid Outdoors internship program (previously Every Kid in a Park). “They have a great program, and now I'm hiring interns in my position and one of them is currently an Every Kid Outdoors intern with the Santa Monica Mountains.”

The position prepared her for life as a park ranger, which started upon graduation in 2016 with her first six-month seasonal job at Grant-Kohrs Ranch National Historic Site in Montana. Returning to California, she bounced between seasonal positions as an education park ranger at the Santa Monica Mountains and a park guide at Channel Islands National Park until becoming a permanent park guide for the latter in 2020.

Since beginning as an educational technician in 2021, she’s worked to provide the Channel Islands National Park’s education programming for students between third and 12th grade, including field trips to the islands or the visitor center in Ventura, the junior ranger program, ranger visits to local schools and online distance learning programs for classrooms.

“It's so important to connect the next generation of stewards of these public lands to their national parks, because most of the children who we bring in have never been to the beach, have never been on a boat or have never been to a national park before,” Szczepanski says. “Giving them those opportunities is what inspires me to do what I do. … We emphasize that national parks belong to you, they belong to everyone, and it's our job to take care of the special places so they can remain for another 100, 200, 300 years.”

Perhaps most surprising about Deanne Dedmon’s role as a superintendent for the City of Los Angeles’s Department of Recreation and Parks is that her responsibilities stretch well beyond the city’s neighborhood green spaces. Dedmon oversees the budget, staffing and programming for the facilities in the Pacific region—one of four regions in the city—which include sports fields, gymnasiums, classrooms, senior centers, summer camps, museums, swimming pools, a cemetery and a beach.

“With this pandemic, you saw the difference made by what we do and the spaces we provide, the extracurricular activities, that getting outdoors is not only good for mental health, but for your physical health as well,” Dedmon says. “Working in recreation, it's something we're always challenged to try to prove, that parks, open space and activity in general is wonderful for society.”

In college, Dedmon decided to follow in her mother’s footsteps, majoring in recreation administration at California State University, Dominguez Hills and working part-time as a recreation leader for the city of Torrance developing after-school drop-in programs.

“My mom worked for the city of LA and then also the city of Torrance when I was young, so I grew up in the system and enjoyed it,” she says. “I always wanted to find something that was fun to do. You're looking for a career you want to be able to do it for the rest of your life. Then when I got to college, I was like, ‘Wow, there's actually a major!’”

After graduation, Dedmon accepted a full-time position for the City of Los Angeles, where she’s steadily grown her career—though her favorite part is still teaching preschoolers.

“Especially in the morning, I can still sit in a classroom, hang out with little kids, listen and be a part of that, but it's rare,” Dedmon says. “That's something I definitely miss being in the position I am now. But as you move forward, you get to that point when you need to be the one helping make the decisions: Which direction are we going? How are we going to fund it? What should we start? … You're mentoring and you're teaching other people. Because if you're the only one who does the work and there's no one else behind you, then what's going to happen when you leave?”

A double alumnus of San Diego State University—with a B.A. in social sciences and an M.A. in public history—James Newland has spent 26 years as a historian for California State Parks with his hands in myriad projects, from developing educational resources to historic​ preservation to community engagement.

“I've always figured if you can get people to care about their history, they'll care about their community,” Newland says. “[It’s about] trying to help people understand every place has history and sometimes the history is tough history.”

In addition, he’s preserved and restored about a dozen national registered properties for State Parks, including the Crystal Cove Historic District Cottages and Will Rogers State Historic Park in Pacific Palisades​.

“I get to be the historian who digs in the archives and helps others dig in the archives to do research, but then [we figure out] how we apply that into better interpretation (education), better exhibits and better engagement with communities,” Newland says.

He’s also dedicated to ensuring all peoples’ perspectives are represented in the historical narrative. About 17 years ago, Newland helped write his department’s policy for Native American consultation before such policies were required by law. “We need to have their voice, concerns and cultural imprint on how we help preserve and interpret their resources and culture.”

Now working with the Department’s Innovation Unit, Newland has piloted and expanded the agency’s Relevancy and History Project to better collaborate with academic partners—particularly the CSUs and the UCs—in order to bring in the next generation of experts, research and education techniques as well as engage the community for their perspectives and participation in these efforts.

“It's allowing us to address some of the concerns State Parks have in outreach to underserved and underrepresented communities who may have never come to a state park, don’t think their history is included or relevant or feel unwelcome due to barriers, whether cultural, social or financial​,” he says.

Learn more about the impact of the CSU’s four million-strong alumni network.