Flying robot will provide a unique view of the world’s most biodiverse ecosystem. 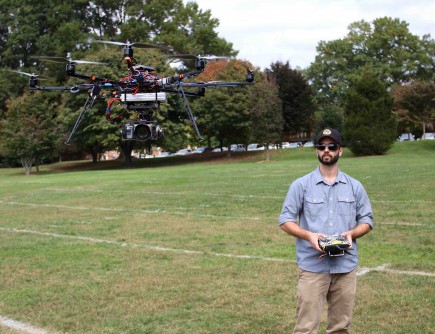 Newswise — As U.N. climate talks continue in Warsaw, soon a flying, insect-like robot developed by scientists at Wake Forest University will give an unprecedented look at Peru’s tropical cloud forest, one of the world’s most biodiverse ecosystems and a key indicator of global climate change.

A research team led by conservation biologist Miles Silman will launch two different drones to conduct climate research in the region, giving a never-before-seen bird’s eye view of one of the most difficult locations in the world to study.

The drones will allow researchers to gather thermal data down to a few centimeters and visible light data down to the sub centimeter level, a big improvement over current satellite capabilities.

“This will allow us for the first time to see how individual canopies are functioning on a landscape level to fix carbon and release oxygen and water,” said Max Messinger, a biology graduate student who worked with chemistry lab manager Marcus Wright to assemble and test the drones. “Once we build a better understanding of why the forest is behaving in a certain way we can start making decisions about how do we conserve this region and ensure that it continues to function.”

Messenger will present on canopy leaf temperature data collected by a drone at the American Geophysical Union’s annual meeting in San Francisco Dec. 9-13.

One of the researchers’ robots, a copter drone, relies on eight small propeller units and is capable of flying at 15 mph for up to 20 minutes at a time. It can be equipped with either a conventional visible light or thermal imaging camera to gather data on everything from leaf and flower characteristics to temperature readings and animal behavior.

“We will utilize its hover capability to take off from small tree-fall gaps in the rainforest and observe things like monkeys feeding or something like that for an extended period of time,” Messinger said.

Their second robot resembles a small airplane. Launched like a javelin, it uses a single electric motor and propeller to fly up to 50 mph for over an hour.

“We can map much more territory with the plane because it can fly three times farther,” Messinger said. “The drawback is that it can’t carry the fancier sensors we use on the copter.”

Both robots are capable of taking pictures of an object from multiple viewpoints. They then use that data to build three-dimensional models that can be studied in the lab. “It works in a way that is really quite similar to how a human uses their eyes,” he said.

Rather than relying on a human operator, the drones fly autonomously, using global positioning data, compass coordinates and onboard stabilization systems.

“We plug all of that info into our mission planning software, which generates the flight plan and sends it to the aircraft,” Messinger said. “It is then as simple as launching it, flipping a switch and waiting for it to finish.”

To date, data about the forest canopy comprised of 390 billion trees is hard to come by.

Silman, who has spent his career conducting research in the tropics, said data is currently collected via remote satellite sensing or manually from the ground or a crane.

“While there is satellite data on temperature and thermal distribution in the Amazon going back to the early 1970s, it doesn’t provide the resolution necessary to build the detailed models we need,” Silman said. “The only other alternative is to rent out a helicopter, which is far too expensive for any kind of continuous observation.”