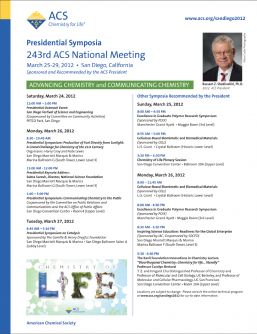 EMBARGOED FOR RELEASE: Saturday, March 24, 2012, 12:01 a.m. Eastern TimeNote to journalists: Please report that this research was presented at a meeting of the American Chemical Society

Newswise — SAN DIEGO, March 23, 2012 — More than a dozen symposia and other events at the American Chemical Society (ACS) 243rd National Meeting & Exposition are being sponsored or recommended by noted science communicator and ACS President Bassam Z. Shakhashiri, Ph.D. They range from a science outreach event for children at PETCO Park to news from an emerging field of chemistry that promises to produce medicines inside patients’ bodies, as well as a symposium on communicating science to the public.

Communicating science is a major part of Shakhashiri’s presidential theme for the year. The William T. Evjue Distinguished Chair for the Wisconsin Idea at the University of Wisconsin-Madison, Shakhashiri is noted internationally for pioneering the use of demonstrations in the teaching of chemistry in classrooms, as well as to the public in museums, convention centers, shopping malls and retirement homes — and at his Science is Fun website. The Encyclopedia Britannica termed Shakhashiri the "dean of lecture demonstrators in America."

Shakhashiri said the symposia connect with the grand challenges that face society and scientists in the 21st century, challenges that range from helping to sustain Earth and its people in the face of population growth and climate change to finite resources, malnutrition and spreading disease.

A schedule of the sessions appears at the end of this press release, and individual topics can be accessed online.

Among the speakers in the plenary session, which is among Shakhashiri’s recommendations:

Carolyn Bertozzi will deliver the Kavli Foundation Innovations in Chemistry Lecture. She is the T.Z. and Irmgard Chu Distinguished Professor of Chemistry and Professor of Molecular and Cell Biology at UC Berkeley, an Investigator of the Howard Hughes Medical Institute and Senior Faculty Scientist at the Lawrence Berkeley National Laboratory. Her interests span the disciplines of chemistry and biology with an emphasis on studies of sugars that coat the surfaces of cells. Her innovations could someday lead to new ways of making medicines — inside the human body.

Another highlight of the ACS 243rd National Meeting & Exposition is a session called, “Communicating Chemistry to the Public.” A featured speaker is Paul Raeburn, winner of the ACS 2012 James T. Grady-James H. Stack Award for Interpreting Chemistry for the Public. Raeburn is a distinguished science writer, author, editor and program director of New Horizons in Science. Other speakers include ACS President Shakhashiri and the following:

Another recommended session is the “Presidential Symposium: Production of Fuel Directly from Sunlight: A Grand Challenge for Chemistry of the 21st Century.” Harry B. Gray, Arnold O. Beckman Professor of Chemistry and Founding Director of the Beckman Institute at the California Institute of Technology, and Nate Lewis, who is the George L. Argyros Professor of Chemistry at the California Institute of Technology, co-organized this set of talks on this timely subject.

An overview of the sessions follows.